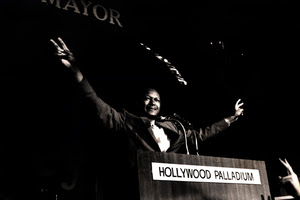 You are invited to attend the screening of BRIDGING THE DIVIDE: TOM BRADLEY AND THE POLITICS OF RACE at the Los Angeles Film Festival.

TICKETS ARE FREE
and must be ordered online
at the Los Angeles Film Festival website at:

This is the second of two screenings at the Los Angeles Film Festival. Unfortunately, the first screening (the world premiere) sold out in less than two days – before we even had chance to publicize it.  (There are no more tickets). That screening will take place on Sunday, June 14th at 1:30 PM. A panel discussion, moderated by Los Angeles Times columnist Patt Morrison, will follow the screening.  Panelists are: the filmmakers, Lorraine Bradley, Andre Royo (actor, HBO’s The Wire) and Joe Domanick (author, Blue: The LAPD and the Battle to Redeem American Policing).

Photo courtesy of the Tom Bradley Legacy Foundation at UCLA

More information on their public television premiere on PBSoCal announced in August 2015.