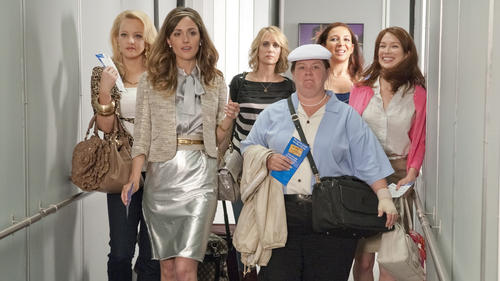 Women are more well-represented in comedies such as "Bridesmaids." (Suzanne Hanover, Universal)

by Rebecca Keegan via The LA Times

"Frozen," Disney's animated musical about a pair of royal sisters, was last year's highest-grossing film worldwide — and also one of its most unusual, according to a study being released Thursday by researchers at USC.

That's because one of its directors, Jennifer Lee, is female, and so are its lead characters.

Just 1.9% of the directors of 2013's top-grossing films were women — a six-year low — and just a quarter of all the speaking roles in animated films belonged to girls or women, researchers found.

The study by USC's Media, Diversity, & Social Change Initiative, which evaluated more than 25,000 speaking characters in 600 top-grossing films between 2007 and 2013, found that women continue to be underrepresented both behind and in front of the camera, especially in the genres of animation and action-adventure.

On screen, women were most represented in comedies, with films such as "The Heat," "Pitch Perfect" and "Bridesmaids" helping drive up the percentage of female characters in that genre to 36%.

Women were least represented in action-adventure films. Marvel movies such as "The Avengers" and fantasy and science fiction franchises like "Star Trek" and "The Hobbit" drove the percentage down to between 20% and 23.9% for the years studied.

Women behind the camera, meanwhile, are scarcer than ever, according to the study. In addition to the low percentage of directors, just 7.4% of writers of the top-grossing movies were women, also the lowest percentage in six years.

"Women just aren't moving into the higher-budgeted, top-grossing fare," Smith said, contrasting the numbers to research USC has conducted into independent film, where women constituted 28.7% of directors at the Sundance Film Festival last year. "The No. 1 barrier is financial.... The people who fund films and greenlight content are mostly male. Women are perceived to lack confidence and to be less trustworthy with resources."

"The way the role is conceived is, a director has to be aggressive, like a general leading troops into battle," Smith said.

In addition to issues of prevalence, the study also looked at how gender influences the way characters are presented on-screen, finding female characters much likelier to be sexualized than male ones. More than 30% of females were portrayed in tight or revealing clothing versus 9.7% of males, while 29.5% of females were shown with full or partial nudity versus 11.7% of males.

One factor that influenced those portrayals was who was behind the camera: Films with at least one female producer were 10.6% less likely to depict female characters partially or fully naked than were films with no female producers attached, researchers found.