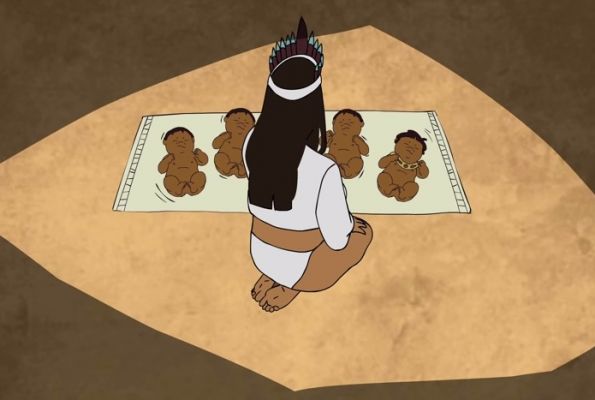 Irka Mateo is on a mission to bring us back to our Taíno roots through a surprising medium: animation.

According to biologists, Taíno DNA is present in 27% of the Dominican population, but the truth is that we see very few (if any?) Taíno expressions in media and film. A seasoned Caribbean folklorist and musician — and mother to emerging artist Jarina de Marco, who we frequently cover here — Mateo boasts an impressive voice as well as an ambitious project.

Deminan KaraKaraKol is the concept trailer for a collaboration with Mateo, the French-Dominican animator Paloma Garcia Minard, and the Smithsonian Latino Institute. The short is based on a creational myth of water and sea creatures, a taste of what is to come if the project gets fully funded.

Based on 15th century accounts, in the days when Taíno Gods and Cemí-Gods (get it?) lived in the ethereal world, Itiba Kaubaba died while giving birth to quadruplets. One of her sons Deminan KaraKaraKol, became a hero when, through adventures and mischief, he managed to prepare the world for the Taínos.

Wouldn’t it be great to see a film about Taíno culture blow up like the Lion King (a story that is thought to be loosely based on the Epic of Sundiata) did?

Watch the teaser below!