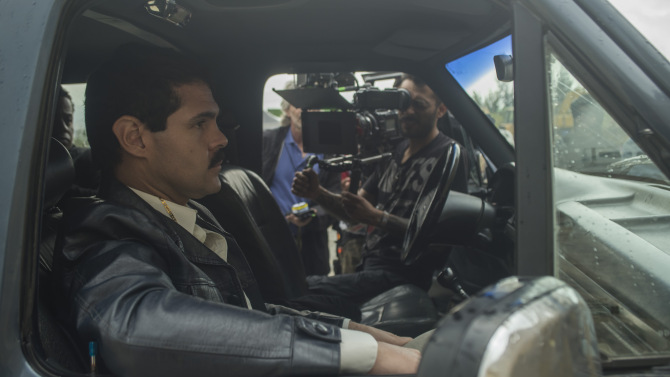 Univision Communication’s Story House Entertainment and Netflix will be the first to tell the story of Mexico’s infamous drug lord Joaquin “El Chapo” Guzman via television.

‘El Chapo’ not only marks the first scripted series from Story House Entertainment, but also its first co-production with Netflix. The long-awaited series will premiere on Sunday, April 23 on Univision at 8 p.m., and will be available on Netflix for streaming at a later date. Colombia’s Dynamo Productions, the same company that serviced ‘Narcos,’ has been working on ‘El Chapo.’ The series has been shooting in Colombian rural and urban settings that can double for Mexico.

Stage and TV actor Marco de la O will be portraying the notorious drug lord as the series traces “El Chapo’s” rise and fall. “We are thrilled to have Marco take on the role of “El Chapo” as we begin to unfold the real story of the most notorious drug lord of our times, revealing the man behind the myth,” said Christian Gabela, General Manager of Story House Entertainment. “We think viewers will be truly captivated by both Marco’s performance and this story of power, ambition, corruption, secrecy and deception.”

Story House has become Univision’s “go-to” for premium scripted and non-scripted programming in English and Spanish. By partnering up with Univision’s team of investigative journalists, the entertainment company has focused on telling stories based on fact, and the story of “El Chapo” is expected to be no different. We are excited for the series’ premiere this weekend and look forward to the other projects Univision’s Story House has in store.

To read more on the series and on Story House Entertainment, visit Variety.