The simple fact is that there are not enough female directors in the film industry. A recent study showed that of the top 250 domestic grossing movies worldwide in 2012, women comprised only 9% of directors.

horizon award seeks to change this by giving a female college student or recent graduate the opportunity to have their work viewed by some of Hollywood’s most influential directors and producers.

By submitting a two minute video to a link, candidates in this contest are in the running for a mentorship during the 2015 Sundance Film Festival from acclaimed producers Lynette Howell (Blue Valentine and A Place Beyond the Pines), Christine Vachon (Boys Don't Cry and Hedwig and the Angry Inch) and Elwes (Dallas Buyers Club and Lee Daniels' The Butler), as well as an all-expenses-paid trip to the festival. 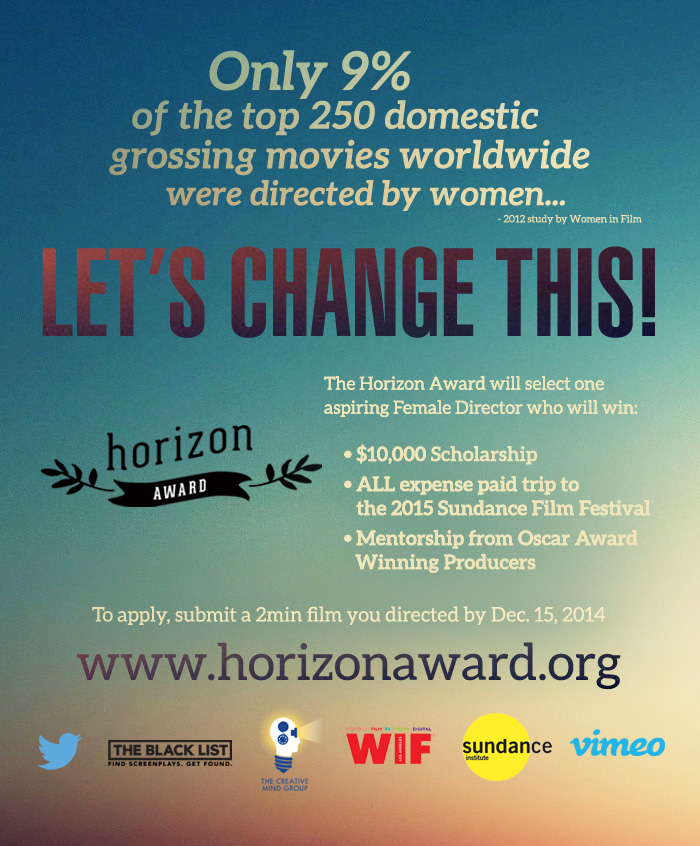 THE RULES ARE SIMPLE...

The award is open to women either still in college, or within 6 months of having left college.

The applicant cannot already have a manager or agent, and must have made less than $5,000 in the film business from their creative talent.

The applicant should submit a film directed by them and which does not exceed two minutes in length, without exceptions.

Applicants are allowed to submit films that have already been made by them, as long as it does not exceed the two minute maximum.

If a film has already been made that is longer than two minutes in length then it must be cut down.