You met Jasmine in Agrabah, Elsa in Arendelle, and soon, you’ll get to meet Elena, in Avalor. The latest addition to Disney’s growing princess brand will be coming to a television screen near you later this summer when Elena of Avalor premieres. We’ve already gushed about all the great Latino actors who’ll be lending their voices to the upcoming Disney Junior show, but those lucky enough to attend the NALIP Media Summit in Los Angeles last week got an exclusive first look at Disney’s first Latina princess.

Not only that, they got treated to a conversation with the minds behind the show. Moderated by Ellen Leyva, co-Anchor of ABC7, the panel included producer Craig Gerber (who also created Sofia the First), writer Silvia Olivas, composer Tony Morales, character designer David Cardenas, as well as executive vice president of Disney Junior Worldwide Nancy Kanter.

In the discussion that followed the screening, Gerber and the Elena crew talked about how the sprightly character came together and how they’ve embraced the idea of remaining authentic when coming up with her Latin American-inspired world. Find some more highlights from the panel below.

On the Show’s Origins

Nancy Kanter: Craig had done some other projects with us and when he started to tell us this story of this princess who turns to her kingdom to save it from the evil queen and the journey she would take, one of the questions that we always ask each other is: What is this world going to look like? Who is this princess going to be? And we knew that the Latina community had been wanting, hoping, expecting us to put out in the world a Latina princess. And one of the questions we ask ourselves a lot is, why not? And the question we asked is “Why not make the kingdom that she comes back to be a kingdom that would be influenced and represent Latin and Hispanic architecture and culture and music? And why not have that princess be, in fact, a Latina? And that’s really what we did. It’s a matter of that perfect meld of a great idea and an opportunity that would have real elements for the Latina community. But also [the chance to] put out there a fantastic message for girls and viewers around the world about what it means to be leader and [to] build that within yourself and rely on your friends and family.

Craig Gerber: Well the most important thing for us, and for me, was to create a character that could be a really good role model and who would embody the traits of leadership that kids (girls and boys) could look up and try to emulate. Not someone who is perfect but someone whose heart is in the right place. Who’s courageous, bold and resourceful. In crafting her character we knew that Elena would be in charge of this kingdom and she’d be ready to rule — you see her position on that in the first episode — but realizes that she has a lot to learn. Hopefully we’ve created a well-rounded character. That was important for us. We really wanted to make sure that as this was going to be the first Latina Disney princess that she would be a character worth watching. And also we wanted to make her kingdom a fairy tale world like only Disney could create but inspired by Latin culture. Something that would look fresh and unlike any kingdom Disney had created before.

On the Show’s Latin American Inspirations

Craig: The first thing that we did was a lot of research. Well, actually before that we assembled a team. You know we wanted to make sure that we have a crew that was very diverse. Who had a lot of people who had personal experience like Silvia, and a whole crew who came from different backgrounds. Especially who are Latino, who would bring their heritage to their show. Then we dove into the research of Latin American mythology and folklore and really create this kingdom. We studied the architecture, we studied the art, the music. Every category. We also brought consultants, several cultural consultants as well as a music consultant to really go into greater depth so that we could create something that was new and fresh but that was very authentic.

Silvia Olivas: [I drew inspiration from] my whole life. I loved the grandparents — they are based on my own. You know, when I grew up I just I really knew that my grandparents had this whole world life before me. I thought it was so cool. I really believed that they had so much wisdom. And I always listened. So Elena believes that her grandparents have so much to say that she puts them on her council. And I love that they’re so feisty. My grandmother loved to put on red lipstick, watch telenovelas, and my grandpa played guitar. That’s what I wanted — you’ll see that guitar a lot!

The stories we pull from Latino traditions and mythology and holidays, and one specific one is the Day of the Dead episode. In my family all the tías have candles lit all year long — we truly believe that when you pass away your spirits are still there. So we really wanted to show that in an interesting way in the show and in the Day of the Dead episode. That day Elena learns that one of her powers is that she can see her ancestors who have passed away on the Day of the Dead. It’s a bit of magical realism. I was talking to Craig — we have a song in each episode — and I wanted a really fun, happy merengue. And he’s like “A happy song about the dead?!” And we talked about it and it end up working really well.

David Cardenas: A lot of the magical elements were drawn from Latin America. For example, all the magic that Mateo uses comes from Mesoamerican writing or just symbology in general. For the creatures themselves we take a lot of inspiration from myths and legends. And there’s a lot of pressure to be as faithful as possible to these tales. But at the same time we really want to make something new and something unique to our own world. 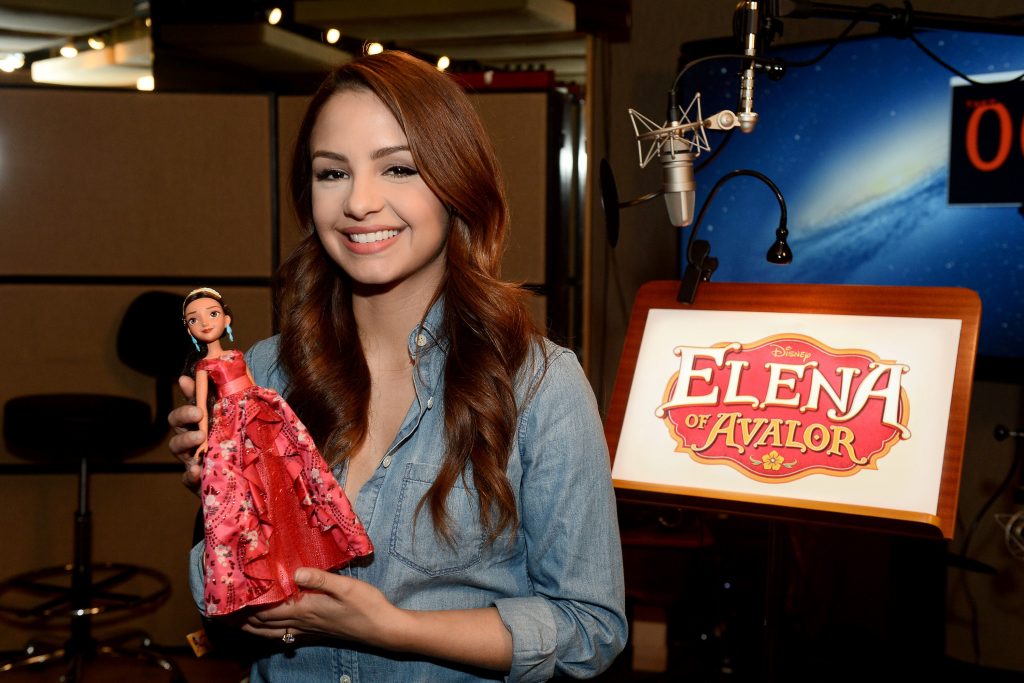 Aimee Carrero is the voice of ‘Elena of Avalor.’ Photo: Disney Junior/Matt Petit

On the Show’s Music

Tony Morales: The music is very special to the Disney universe and that took sometime to figure out. As you saw here each episode has two musical parts. It’s got a score which is the Disney universe through a Latin influence filter. And then the songs: featured songs that are inspired by each episode’s storyline. This one, “Ready to Rule” was a mariachi-inspired song. My influences for the underscore of the series has really drawn from folk music of the Latin world. Mostly because the melodies and the rhythms lend themselves to the storytelling and the energy.

On Giving Elena a TV Show Rather Than a Movie

Nancy: Well, I think if you look what TV looks like today, you’re starting to see it be the equal to film. If you see the actors who are drawn to television, the scope, the style, the richness, the quality of television, we absolutely believe that the distinction between movies and TV is fast disappearing. For our audience of kids we don’t get to tell them just one story. We’ll get to tell them a hundred and plus stories. And we get to build a richer character, a richer world, a variety of stories. And we’ll really be able to draw them into this story every day because they’ll be able to watch it everyday.