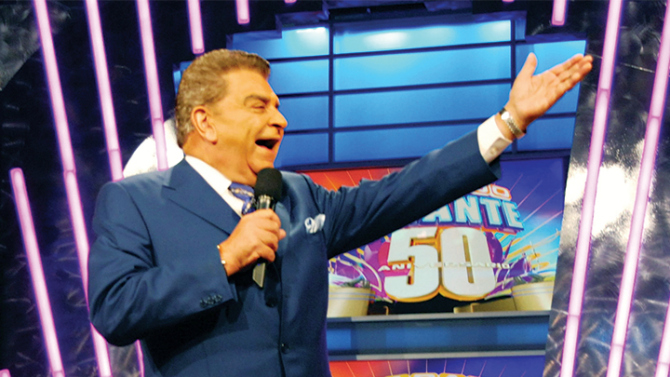 “Sabado Gigante,” a Saturday night tradition in millions of Hispanic households around the globe for more than 53 years, ended its run a ratings winner for Univision over the weekend.

Nielsen estimates that “Sabado Gigante: Hasta Siempre!” — hosted as always by its Chilean-born creator, Mario Kreutzberger (stage name) Don Francisco — averaged a 1.1 rating in adults 18-49 and 3.4 million viewers overall for its three-hour-plus live finale Saturday night. This is among the five most-watched telecasts in the history of “Sabado Gigante” and is the top demo score for the show since its 50th anniversary special in 2012.

The “Sabado Gigante” finale made Univision the No. 1 broadcast network in primetime among adults 18-49 and adults 18-34.

Univision ranked No. 1 in total viewers for the night in New York, Los Angeles, San Francisco, Miami and Sacramento. It also finished ahead of all other broadcast networks in adults 18-49 in these markets as well as Houston and Phoenix.

“Sabado Gigante” (Gigantic Saturday) has aired original episodes for 2,600 consecutive weeks, spanning roughly 16,000 hours of programming. The show premiered in Chile in 1962 and began airing in the U.S. in Miami on the Spanish International Network (SIN) in 1986. SIN became Univision the following year, and “Sabado” has been a mainstay of the schedule ever since.

Univision plans to replace “Sabado Gigante” on Oct. 17 with the two-hour Televisa variety program “Sabadazo” and a new one-hour Saturday edition of entertainment news show “Sal y Pimienta,” which will also air in its standard Sunday slot. “Sabadazo” aired on Univision from September 2012 to July 2015.