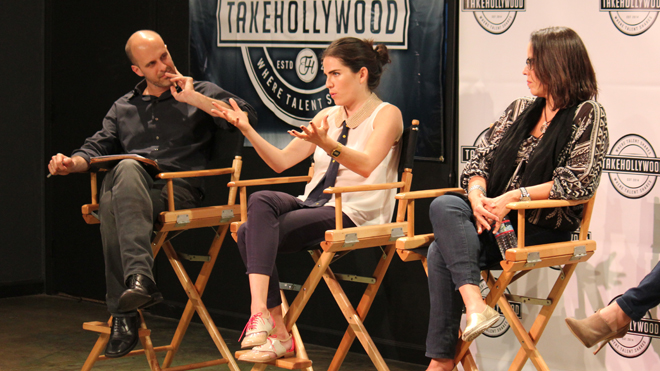 Where does a young talent, someone just heading to Los Angeles to break into the entertainment industry, go to find a community of professionals to be mentored by? Where do they find the encouragement needed to become the next Sofia Vergara or Benicio Del Toro?

Digital hub Takehollywood is offering a new way for aspiring actors and moviemakers to get inspiration, advice and connections in the entertainment mecca.

Launched in 2007 by award-winning writer, director and producer, Edoardo Ponti—who also happens to be Sophia Loren’s son—and his wife, the acclaimed actress and producer Sasha Alexander, Takehollywood is a for-pay site where working Hollywood folks give a hand in demystifying the industry and make it more accessible.

Newcomers can learn the tricks of the trade from working actors like Ted Danson, Rosanna Arquette, Christina Applegate and Malcolm McDowell as well as casting directors via video. They can hear stories of perseverance from those who struggled through tough times and succeeded.

“There was no platform for entertainment professionals to hear from people within entertainment industry about the pursuit of their craft. I wanted to share these people’s stories." Ponti told Fox News Latino. "I wanted others to hear about what drives people to be the best at what they do, whether they be directors, managers, actors and so on,” he said.

He said Hollywood insiders are now able to collaborate and interact with each other in a new way, from how to navigate being on a movie set to preparing for a role to audition tips to finding an agent. Or simply to provide the encouraging words people might need to forge ahead in the face of nearly constant rejection.

And when it comes to Latino actors, it can be even more difficult for them to find their way— although Los Angeles and much of Southern California is a highly diverse place, Hollywood has been slow to take up the casting call of inclusion.

Takehollywood is working to combat that with events that highlight working Latino entertainers such as the Emmy-nominated actress Vannessa Vasquez, from “East Los High,” actress Karla Souza from “How to Get Away with Murder,” and talent manager, Vince Lazzo.

“Our goal is to give all our users a well-rounded view of this business, and at the same time be able to recognize diversity in this industry,” Ponti told Fox News Latino.

Souza, Ponti pointed out, “started out acting in Mexico and moved to the U.S. a few years ago to continue building her career. Whereas actor Luiz Guzman, of ‘Boogie Nights’ and ‘Carlito’s Way,’ and actor Efren Ramirez of ‘Napoleon Dynamite,’ started out in the industry at a different time and in a different way.”

Ponti added, “All these personal stories, we feel, are compelling to our users.”

For her part, Alexander wishes “I had had access to these stories when I was starting out in my acting career. There is no single path to getting to where you want to go. Watching classic actors like Lauren Bacall, Laura Dern or Norman Lloyd tell their story and share their advice provides a really important perspective for those who are just starting their career in this industry.”

Of course there’s still a long way to go in terms of diversifying Hollywood, but Ponti and Alexander believe that creating a community of like-minded artists is a big step.

“The Latino community brings unique cultural value to film and television,” Alexander told FNL.  “These cultural barriers can be a challenging element in the entertainment industry, but I feel like these are breaking down. There’s more diversity now than ever before.”

Check this out on www.latino.foxnews.com