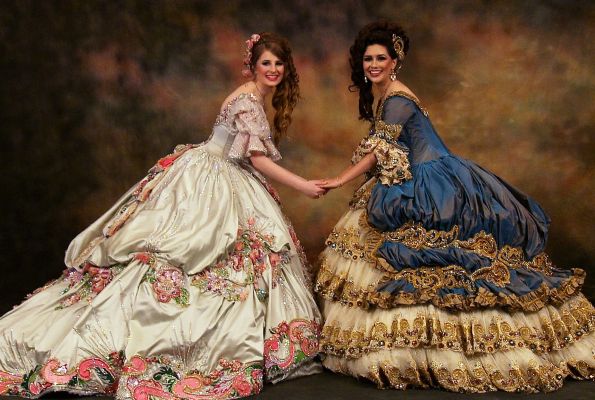 Ambulante, a documentary film festival founded by Gael Garcia Bernal, Diego Luna, Pablo Cruz, and Elena Fortes in Mexico almost ten years ago, is making its debut in Los Angeles this year. Part of the inaugural edition of Ambulante California, curated by Christine Davila (the newly-christened Director of Ambulante USA) is the September 25 screening of Las Marthas, a documentary about Martha Washington’s Colonial Pageant and Ball.

The debutantes are known as “Girls for George Washington” (for realz.) They are chosen by members of the Society of Martha Washington, and are either legacy (their families are part of the Society) or not (those who are invited when legacy girls decline.) The debuting part of the ball is really a fancy obstacle course. While wearing 100 pound colonial gowns that cut off their circulation, they have to walk down a flight of stairs, take a deep bow, and twirl. In addition they seem to be required to wear an expression best described as possessed porcelain doll.

In an interview with Remezcla earlier this year, the director, Cristina Ibarra, explains why she chose to depict this peculiar celebration:

“As soon as I saw a Mexican-American debutante dressed as a colonial heroine, I was immediately intrigued. From the outside, this might look like “just pretty girls in pretty dresses,” but when we look at the bicultural ways this event is celebrated we uncover multiple layers of meaning that deepen our views of the Latino experience in the United States. And hopefully the debutantes can teach us a little about what is like to be an American today, where we all juggle multiple identities.”