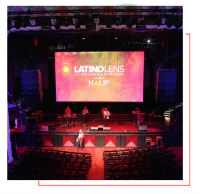 This year NALIP’s current official members and a select committee of industry professionals will vote to select the winner in each category for Film of the Year. The two categories selected are:

The Latinx category features the best in US Latino and breakthrough Latinx filmmaking talent. These films could include a documentary, animation or feature. Get to know about the films in this category and the NALIPsters behind them:

‘La Granja’ (2015)is a film about three intersecting stories, promising young boxer, a barren midwife and a lonely kid with a bike all in pursuit of happiness and it’s unanticipated consequences during a difficult time in Puerto Rico. NALIP had the pleasure of screening Angel Manuel Soto’s film La Granja at last year’s Latino Lens Showcase, since then NALIP continues to support his career and film most recently screening at FICG in LA 6, where NALIP will be present.

‘Hands of Stone’ (2016) is the legendary story of Roberto Duran and his equally legendary trainer Ray Arcel and how both their lives were impacted by each other and their past and in their own way achieved redemption. Director, Jonathan Jakubowicz and lead actor Edgar Ramirez both did a compelling interview with NALIP where they expressed the difficulties and the process of creating such an inspiring film.

‘Lowriders’ (2016) a film by Ricardo de Montreuil is about a young street artist on East LA who is caught between his father’s obsession with the lowrider culture, his ex-felon brother and his own need for self expression. Ricardo de Montreuil recently attended and was a speaker at this past June’s NALIP Media Summit.

‘Don’t Breathe’ (2016) a film that currently has record breaking numbers at the box office is about a group of friends breaking into the house of a blind man only to find out he isn’t as helpless as he seems. NALIP is a long time supporter of Fede Alvarez and his work.

‘Memories of a Penitent Heart’ (2016) a documentary film by long time NALIPster Cecilia Aldarondo is about Miguel who dies of AIDS, his niece tracks down his gay lover and cracks open a Pandora’s box of unresolved family drama. Cecilia Aldarondo was a participant in the 2014 NALIP Latino Media Market with this project and screened the film at this years Media Summit.

The Latino International category includes films receiving noteworthy attention prior to festival and award season. NALIP believes any of these films can be taken for your award consideration. Get to know the films nominated:

The Distinguished Citizen (2016) Argentinian film by Directors Gaston Duprat and Mariano Cohn about Mr. Mantovani, after refusing big and prestigious awards all over the world, Literature Nobel Prize winner, accepts an invitation to visit his hometown in Argentina, which has been the inspiration for all of his books. It turns out that accepting this invitation is the worse idea of his life.

Neruda (2016) A Chilean film by Director Pablo Larraín is about an inspector who hunts down Nobel Prize-winning Chilean poet, Pablo Neruda, who becomes a fugitive in his home country in the late 1940s for joining the communist party.

Desierto (2016) A Mexican film Directed by Jonás Cuarón about a group of people trying to cross the border from Mexico into the United States encounter a man who has taken border patrol duties into his own racist hands.

Alias Maria (2015) A Colombian film Directed by José Luis Rugeles is a vision of Colombia's inhuman armed conflict, seen through the eyes of a young and pregnant girl soldier.

Breadcrumbs (2016) Directed by Manane Rodríguez is an Uruguayan Spanish film that addresses sexual violence suffered by a group of inmates and how years later decide to report it.

Regardless of the winner, NALIP believes, all of the following films should be in your short list for award consideration. Members will receive a separate voting ballot. Your membership must be current and in good standing to participate.

Check out the trailers for each nominated films

Become a member at Nalip.org and be eligible to vote for your favorite!