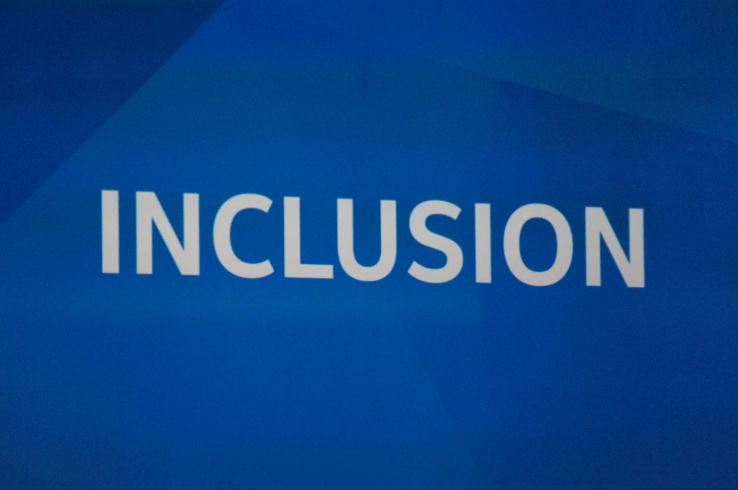 In an afternoon keynote at CES 2015, Intel‘s CEO Brian Krzanich bounced on stage to pass out some slightly platitudinous statements about the future of technology, and to bring the audience dancers, a cello, and what appeared to be a boy band, all fused to trippy lights.

The most important part of the keynote came at the end, however, when Intel pledged to spend $300 million to bring its workforce diversity up to “full representation” of women and “underrepresented minorities” by 2020.

Krzanich stated that “Intel will lead by example” on the issue, though he also noted that the lack of diversity in technology is something that the full industry must work on, and not just his company.

To reach its goal, Intel will hire differently and tie executive pay to performance on the issue. The latter will likely ensure that those who make hiring choices obey the former. Krzanich also promised transparency on its progress.

The main cutlet of the presentation saw the CEO outlining three forces that, in his view, will shape the future of technology. They are somewhat simple to understand, so let’s take them each in order.

He also stated that “computers are gaining senses,” something that “will result in their ability to understand.” Krzanich is correct in that computers are becoming increasingly sensory. But — and as we will see shortly in his other points — sensors are proliferating everywhere, so the point becomes correct from both directions at the same time.

Krzanich noted a Dell tablet, and a camera, both which use the company’s “RealSense” technology to bring three-dimensions into the consumer space, implicating photography and the like. Intel also spend some time discussing wireless powering, for the second year running. Last year, the company showed off a bowl that had wireless charging technology. This year, it showed off a tablet that had the same capability.

Krzanich then brought out a robot that had a screen showing off the face of a human, and then a host of drones that sounded like that bees nest you stepped on when you were a small child. Importantly, the CEO coined a new phrase: Drone ping-poing.