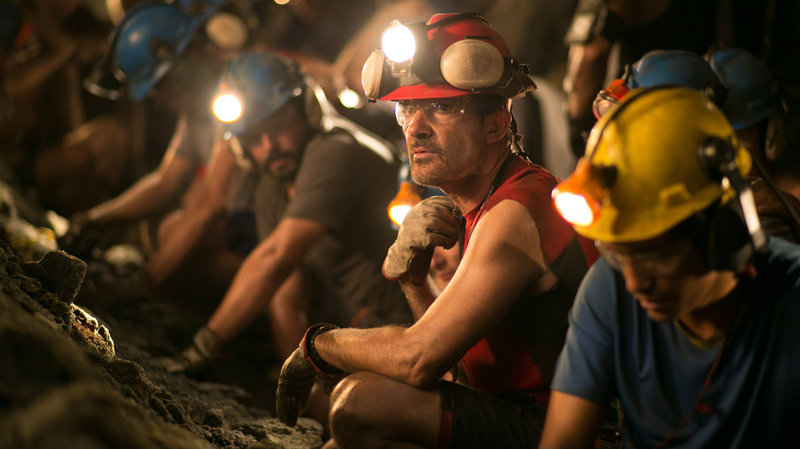 Five years ago, the world was riveted by the plight of 33 miners trapped deep underground in Chile. For 69 days, we waited to see if the men would survive the collapse of a gold and copper mine. Then came a miraculous ending: All the miners were carried to safety in a tiny capsule called The Phoenix.

Now that real-life story has been made into a movie called The 33. The intense, action-packed drama was directed by Mexican filmmaker Patricia Riggen. Riggen's handful of previous films were small — a documentary and a couple of intimate features — but the emotions of The 33 are on a grand scale. To help capture those emotions, Riggen flew to Chile to talk to the original miners and hear their stories.

"I spent a lot of time with them," she tells NPR's Renee Montagne. "I met with each of them privately to really hear their experiences."

On going from making small films to a much larger production

Let's say my experience making little, independent movies came in very handy. We didn't have a studio when we were making it. Nobody wanted to make this movie because it's a drama about 33 Latin men, and that doesn't get made anymore. It took, you know, real effort. And we ended up shooting 35 days, six days a week, 14 hours every day in the mine.

On shooting the film in a real mine

We shot in two real mines in Colombia. And we went to Colombia because their mines ... are not as deep and as dangerous as the Chilean mines. Every single moment, we had the head of the mine with us. ... So sometimes he would come in and say, "Everyone step away," and they would put up a ladder and they would detach a big rock that was going to fall. And it would fall, they would clean it up, and then we would continue shooting. 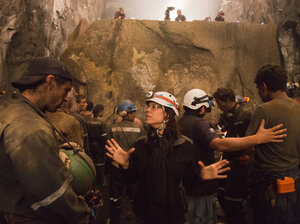 Patricia Riggen filmed The 33 inside two Colombian mines. She says, "We went to Colombia because their mines ... are not as deep and as dangerous as the Chilean mines." Courtesy of Alcon Entertainment and Warner Bros. Pictures

On whether people were shocked when they heard she — a young, female, indie filmmaker — was making an action film about 33 men stuck underground

Shocked every single day. You know, they can't believe I did this. They see the [mine] collapse sequence and it's like, "How did you do this? You're a woman." And I have to tell you, [it wasn't about] making an action movie, but really being able to portray the heart of these guys and what they went through emotionally. And that's what I brought to the movie besides the big action sequences.

I have a scene in which they come down to their last tuna can. So it's the end — it's one tuna can, there's 33 of them — and they're going to say their goodbyes. And they decide to share it together in a last supper scene. And then the magic realism happened because I asked them one day, "How did you guys survive hunger?" And they answered, "We ate. We ate all the time, Patricia. We talked about food: a giant empanada; the other guy brought the quinoa; we did a roast."

And I thought: This is incredible, you know, because normally men in these circumstances don't survive. But they came back to tell us. So I thought: This is me; this is Mexico; this is magic realism. I'm going for it. ... And then they go back to the reality of their little tuna can.

At the end, I wanted to have them in the movie. So I called them up and said, "You gotta show up. It's a Sunday." And I got a place on the beach and they all came. They sat at a big table and they ate, all of them together, and laughed. And you can see those faces of really hardworking men that have suffered so much. They are not doing well, Renee. They have PTSD; they didn't get compensated by the mine owners — nothing. So, you know, we're all working really hard to be able to give them something back. They deserve it.

On whether, as a kid in Guadalajara, she thought she'd grow up to be a director

It never crossed my mind to be a director, and I'll tell you why: because I'm a woman. It just didn't occur to me, but I knew I had to be in film. I finally, you know, moved to Mexico City, where the film industry is. I started working there as a producer, which is a very, very valid thing for women to do, because we always produce for men, right? ...

I was pretty successful but I was really unhappy, so I thought, "I'm going to go back to school; I'm going to pay for a master's degree." So I went to New York City to Columbia University, and with the first directing exercise I knew I was a director.

I wish I had seen some women directing before — that would have given me the idea of who I was.

Hear the full interview on NPR.org