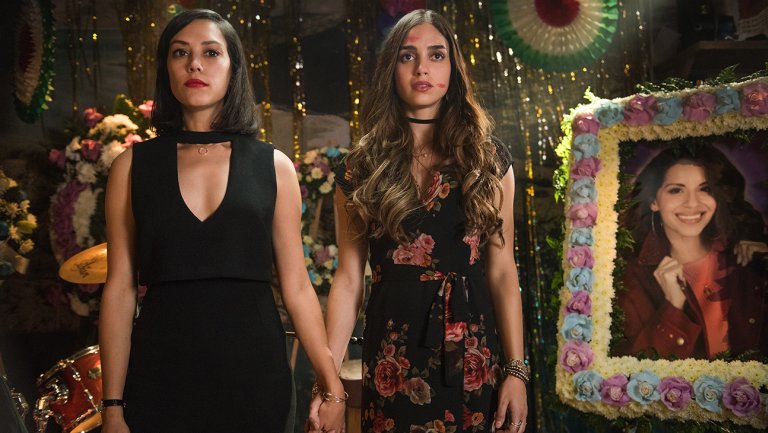 Photo courtesy of Starz/The Hollywood Reporter
Showrunner Tanya Saracho talks with THR about how her half-hour drama helps open the door for other series to explore identity.

In Starz's Vida, the characters often speak in Spanglish, peppering their majority-English sentences with Spanish words and phrases. It's an interesting move, especially because the show doesn't bother to subtitle these moments in order to accommodate non-Spanish speakers. But for some of the audience, it only adds to the authenticity.

In fact, much of Vida will feel authentic (and perhaps comforting) to Latinx and queer viewers — and especially those who fall into both groups. The half-hour drama focuses on two estranged sisters — Emma (Mishel Prada), steely and closed off or good reason, and younger Lyn (Melissa Barrera), an occasionally naive agent of chaos — who return to their old apartment in East Los Angeles after the sudden death of their mother, Vidalia. As expected, secrets are revealed: For one, Vidalia's "roommate" Eddy (Ser Anzoategui) is actually her wife.

According to first-time showrunner Tanya Saracho, who previously wrote for series like ABC's How to Get Away With Murder, HBO's Looking, and Lifetime's Devious Maids, it was Starz who approached her with the base idea. "They wanted a female millennial show about gentefication, which is the gentrification of a Latinx space," Saracho tells The Hollywood Reporter. "The queerness came from me. I identify as queer, and it had to be there."

While queer characters and storylines have been slowly increasing on television, a series like Vida still feels important and remarkable because of its wide range of representation. There's younger, femme Emma, who wrangles with her mother's hypocrisy and secrecy, and also older, butch Eddy, who struggles with the death of her wife. "Some people receive Eddy's presentation at first like, 'Oh she's going to be tough,' [but] she's the softest. She's the heart of the show." Throughout Vida's first season, viewers also get glimpses of Emma and Eddy's respective friend groups: queer people of all ages, ethnicities, genders, class statuses and education levels. Many, of course, are Latinx, which "is important because we haven't seen brown queers that much on TV, not unless sometimes we're the butt of a joke."

Vida never makes any of its queer characters into a punchline, nor are they stereotypes or lecturers meant to educate the viewers. "I just end up writing these real people and exploring queerness in a real way without too much didactic explanation of it," says Saracho. "There's some stuff we didn't want to explain. There's a genderqueer character and actor, there's a trans actor, but it's not about that." Instead, Vida exists in a place of realistic, lived-in queerness, where characters casually mention their "fluid" phase, or playfully identify another as a "power bottom" without stopping to explain. Saracho uses Emma as an example, citing her short nails in the pilot episode. "And then you see her in the third episode, she's a top femme. We don't claim it. We don't name it. Everyone's kind of living their reality."

Although the series is talking specifically about queerness, this approach also expands to the Latinx-specific aspects of the show. When asked about the show's use of Spanglish, Saracho is quick to note that Cubans in Miami, New Yoricans in New York and Mexican-Americans in East L.A. all speak different versions. "It's all very specific to the culture, and I love that we get to do Mexican-American Spanglish, because it's so specific to us." Vida depicts terms, foods and cultural norms that exist within the Latinx community but that aren't often included when television features a Latinx character. "I've never heard the term pocha on television, but that's a term that's in our community," Saracho says. "Those kinds of things that are code-switching moments are really important in the show even though they're not huge for the story. For me it was like, 'I've never seen a show that uses this terminology.'"

Read more at: The Hollywood Reporter