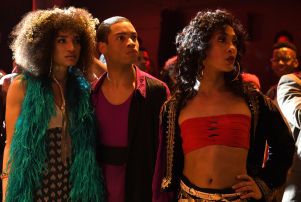 GLAAD released their annual “Where We Are on TV” report for the 2018-2019 TV season Thursday morning and the numbers showed a record-high percentage of LGBTQ regular characters on broadcast TV, with LGBTQ people of color outnumbering white LGBTQ people for the first time.

Now in its 23rd year, details of the report were announced during an event with GLAAD President and CEO Sarah Kate Ellis as well as a panel discussion that included writer, director and producer Greg Berlanti, UTA TV literary agent Lucinda Moorhead, Steven Canals (Co-Creator, FX’s Pose) and remarks from GLAAD Director of Entertainment Research & Analysis Megan Townsend. The report found that LGBTQ series regulars accounted for a record-high 8.8% of all series regulars on broadcast television. This is an increase that beats last year’s record of 6.4%, which was the highest since GLAAD expanded the report to count all broadcast series regulars 14 years ago.