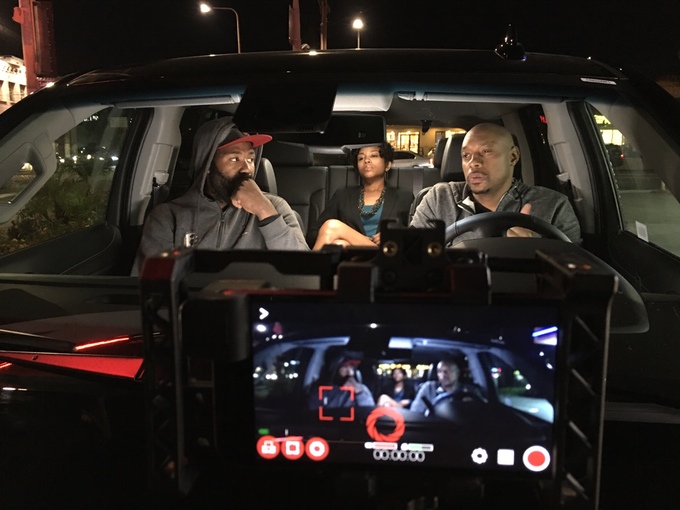 One of the films shown last week at the South by Southwest film festival in Austin, Texas was “9 Rides,” the story of a depressed, introspective limo driver in Los Angeles and the various people who ride with him one dark night.

“We were shooting at four or five in the morning and there was nobody outside and it was real cool,” Director Mathew Cherry said. “It added to the loneliness and the overall aesthetic of the movie.”

Cherry, who had made several short films prior to “9 Rides,” said he was inspired to do this full-length narrative film after seeing the critically acclaimed movie “Locke,” in which actor Tom Hardy portrays a character going through a personal crisis by driving at night and talking on his cell phone with various people. Cherry was impressed with the idea that a gripping dramatic film could consist of one man confined in a vehicle for an hour and a half.

Working with a small budget, Cherry decided to take advantage of the 4K resolution of Apple’s iPhone 6S to make his film which features a number of characters, but takes place entirely inside a car. He used several iPhones mounted in and on the vehicle.

“We literally drove on the 405 [freeway] at 60-miles-an hour with iPhones suction-cupped to the hood of the car and they never fell off,” he said.

This is not the first movie shot on an iPhone. Last year, critics praised the film “Tangerine,” which featured transvestites and other colorful characters in Los Angeles and was shot on an iPhone 5S, which shoots high definition, but not 4K.

To achieve a widescreen effect, “Tangerine” employed an anamorphic lens attachment that slips over the corner of the iPhone. Cherry liked the look and decided to use the same kind of lens on his iPhone 6 cameras. Using this together with the application Filmic Pro, he was able to produce professional quality images that show crisp detail.

In order to capture everything he needed, Cherry carefully positioned the iPhones.

That way, he said, he had video showing each side of the interior of the car as seen through the windshield, plus whatever could be seen outside as the car roamed the streets and highways.

He also had iPhones attached to a tracking car to get shots of the limousine and on the front of the vehicle facing forward to shoot the environment through which it moved. He himself lay hidden behind the actors in the vehicle’s farthest-back seat, listening to the dialogue and monitoring the video shots. He shot multiple takes and a lot of the roadways in order to have enough video to work with in editing and post production.

Shaping the film in the edit

In the editing, Cherry was able to create a dramatic flow from the actors’ improvised interaction in the vehicle. He said the editing process was challenging, but it was from that process that “9 Rides” took shape. He wrote a very loose script and relied on his talented actors to improvise most of the lines and their reactions to other actors’ lines.

When they took the film around to potential distributors, producer Jerome Caldwell found it can be difficult to sell a movie that was shot on an iPhone.

“They think we are just holding the phones up, shooting like regular people,” he said, “so we may show them a picture of what it looked like with the grip and the lens and they are like,'That’s an iPhone?’”

Cherry, who left a potential career in professional football to follow his film-making passion, hopes to follow “9 Rides” with more such films. Jerome Caldwell thinks the film will also inspire other creative people with a story to tell.

He said, “I think the way the film came out, so amazing and so ‘crispy,’ as I like to say, I think more people will want to shoot on iPhones going forward.”

Both men say that the camera does not matter as much as the acting talent in front of the lens and the quality of the story they portray.

Check this out on voanews.com