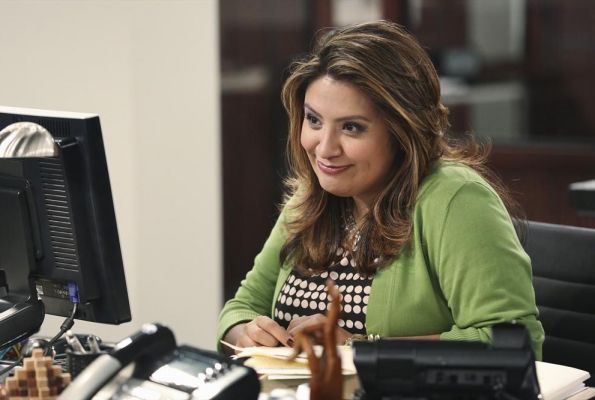 Comedian Cristela Alonzo admits she’s been a bit surprised at how much control the ABC network has given her with her new semi-autobiographical sitcom Cristela, which debuts this week. Despite her initial disbelief, it’s a position as a decision maker she feels she needs to have if her new show is going to become a staple in the TV landscape.

On the show, Alonzo, who was born in San Juan, Texas, plays the title character, a Mexican American graduate student working as an unpaid intern in a prestigious law firm and hoping to reach her American Dream to become a lawyer and move out of her sister’s house. Before her big break with the ABC series, Alonzo wrote for the Comedy Central show Mind of Mencia and was a featured stand-up comedian on shows includingLast Comic Standing and Gabriel Iglesias’ Stand Up Revolution.

We sat down with Cristela to talk about TV shows she grew up watching and what she thinks the key is to making Cristela a success on ABC.

Why do you think it has taken so long for a Latina stand-up comedian to get her own sitcom?

I think it took long because it’s hard to get a TV show on the air, period. I think you stand out more when you’re brown. I mean, the chances of anyone of any race getting their own show are like .001 percent. It’s a longshot either way. I think with Latinos, we are just at that time where we’re finally a big enough number that you can’t ignore that we’re here anymore. We’re such a big part of the country that you have to have something, someone [on TV] that represents who we are. That’s what I like the most about the ABC fall schedule – it’s so diverse. I think it’s the only network that does such a great job at representing what the country looks like.

Growing up, was there anyone on TV you could identify with yourself?

You know, because I grew up in McAllen, we would watch Televisa a lot. The comedy I liked was Roberto Gómez Bolaños – Chespirito. I liked how big the character was. I think from him I learned how to be big – to be silly and not be ashamed of it. I also connected with the show Roseanne because Roseanne’s family struggled. My family struggled. Even though she was white and I was Latino, our families had the same problems. That’s what makes a good show. It doesn’t target one group. It tells a story everyone gets. So, for me, when I saw the show I was like, “Oh, yeah, they can’t afford to buy Becky the dress she wants because it’s expensive.” I totally got that.

I love Roseanne. I have this theory that on the show, the chubbier she is, the better the season. As the series continued, I think she got too…

Yeah, and then the writing changed and the show jumped the shark when the family won the lottery.

Oh, I stopped watching it when they won the lottery. It was a different show. She had this appeal in the early seasons. She was like everybody. I understand a lot of celebrities lose weight because they have the opportunity to get in shape and become healthier, but when you get so polished, you can’t tell the story of a blue-collar family anymore. I’ve had people ask me, “Why would you do network TV if all the popular shows are on cable?” Well, this story is about a working-class family, so I wanted to be on a channel that working-class families can get. If they have to, they can get an antenna and watch the show. I can’t tell the story of a poor family on a premium channel that you have to pay $20 a month to watch.

We’ve had Latino-themed shows on network TV before. Some of them worked for a while like The George Lopez Show and some of them fell off the face of the earth like Rob. How do you think Cristela is going to change the current TV landscape?

Well, when this project was first announced, a lot of the feedback I got was from people who were afraid [the show] was going to be stereotypical or the network was going to make me change it somehow or they were going to make it into what they though a Latino show should be. But with this process, I have been surprised with how much power they have let me have, which is all of it. From the beginning, I told myself that in order to do this show right, you have to be honest. You can only tell stories you know and be authentic in that way. The moment you stop being authentic, people won’t want to watch it because they know you’re fake. Why does anybody want to watch something that’s not real? With this show, I have a say in everything. I even help decorate the set. I went around and took [props] off the set that I thought were too much. Everything that felt like home, I wanted to do. Even with storylines, something would get pitched and I would say, “Well, my family wouldn’t do that. Let me explain to you why.” What I loved is that the only thing they needed from me was an explanation to why not. The moment I gave them that explanation, they were fine with it, which shows how much faith they had in me. I think you need that to have a show like this succeed.

I’m assuming it’s a little easier to get exactly what you want when you’re one of the writers of the show.

I write on the show because I want to make sure the show is done right. I don’t want to give up that power because I know that the name of the show is my name. I have to represent it. I mean, whether this show fails or succeeds, I want to do it my way and make sure I did everything I could to keep it authentic.

Speaking of authentic, the scene in the pilot episode where someone mistakes you for a cleaning lady in the law office hit close to home for me. One time, I went to a black-tie affair and as I was walking to the restroom, this lady snapped her fingers at me and pointed to her plate. She thought I was one of the waiters. How should have I responded to that? I really had no idea what to say and didn’t want to embarrass her, so I just pointed to the kitchen and walked off.

It’s so funny because I’ve had people ask me why I had that scene in the pilot. The people that ask me are people that have never experienced that. Some of those people would tell me, “Oh, but that doesn’t happen anymore. We’re past that.” I’m like, “No, it still does happen and it happens quite a lot.” I wanted to have that scene in the show because I want people to know that it still happens. For me, what I find most important in those situations – and what the character does in the show – is that I don’t take it serious and I make everything lighthearted. Once I let it get to me, I give those words power. The moment that happens, then they win.

Would you have signed on to this show if, instead of playing this intern at a prestigious law firm, the producers wanted you to play a maid?

I wouldn’t have. If I had been offered a show to play a maid I would’ve turned it down because I feel like those stories have been told enough. I want to make sure I’m telling stories about other people we haven’t seen before.

Even a devious maid?

(Laughs) Even a devious maid. I just feel like that’s a project for other people. I just want to tell stories about everyday Latinos struggling to get by and trying to achieve the American Dream. I want to show audiences that we’re just like everyone else.

Don’t miss the Cristela season premiere on Friday, October 10 at 8:30pm on ABC.

Check this on on Remezcla.