For the past 17 years, the National Association of Latino Independent Producers has been gathering the most prominent voices in Latino media and offering a chance to newcomers to interact with them and feast on their knowledge and expertise. While this event, known as the NALIP Media Summit, is always held in a professional environment, this year the organizers stepped up their game and packed the Dolby Ballroom and its adjacent spaces with hundreds of Latinos content creators.

Instead of your Angelinas, your Brads, and your Meryls, the halls were invaded by Juan Joses, Ritas, and Justinas, and the sounds that permeated the venue were a blend between English and Spanish in the most organic way. For most of us, NALIP is like an impromptu reunion where people get to catch up in between sessions and share their side hustle with others in similar circumstances. The hardships of creating content in what’s still a difficult industry to navigate become more tolerable surrounded by such a huge support network. At NALIP we are all basically primos, with different accents and shades, but primos nonetheless.

If you make it through the three days and still have energy for one last parranda, the summit culminates with the Latino Media Awards, where a group of talented overachievers in the community are recognized in front of their peers. “The home of the Oscars is today the home of Latinos,” said NALIP’s Executive Director Axel Caballero during his opening remarks. The symbolic importance of this fact was reciprocated with whistling, cheers, and clapping from an enthusiastic audience that understood how crucial it is to think of our creators as being on the same level as those praised by the mainstream. That night the Dolby was Latino: cumbias, reggaetón, and rancheras included. 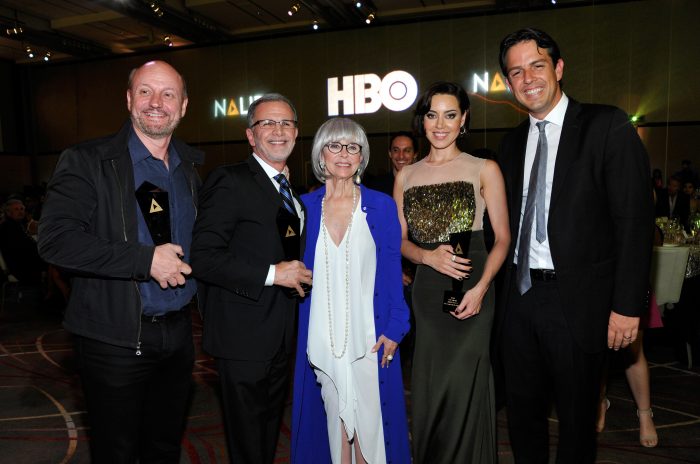 “We are here and we are here to stay, and not only that but we are here to change the industry,” continued a visibly moved Caballero, whose leadership has been hailed as a defining factor in the growth and visibility the organization has achieved in recent years. Panels that ranged from Latinos in festival programming and film criticism to those revolving around new technologies and platforms prove that Latino content creators are occupying every space possible whether the rest of the industry has noticed or not. “I know that today and tomorrow you will create with us,” he concluded, alluding to the resources and programs that NALIP offer year-round for its members. His passionate speech was followed by singer-songwriter Irene Diaz who performed a couple of mellow tunes as guests dug into their food.

I am blessed to work at a company of storytellers. The DNA of Time Warner is to tell the stories, but when I came into this job about 11 years ago it became evident that we weren’t really world’s stories and that when I asked around and said, “Where are the stories of Latinos, where the stories of African Americas, where are the stories of people abroad,” this was something that the company was just beginning to explore. Our journey at the foundation was to actually move hand in hand with the company and to our best to identify the best cultivators of talent in the US. Naturally went to places like Sundance, Tribeca, Film Independent, but we also came to NALIP because it is the only organization entirely devoted to Latino storytellers.

If the political diatribe isn’t an example of how we as a community must own our narrative, there is no other time that will prove that more than now. We are 57-million strong, we are the largest ethnic minority group on this country, but are nowhere near as represented in the media as we should be. I know, our foundation knows, Axel knows, we all know, that great Latino talent exists but needs the doors to be open, needs the resources, needs the support, and the help of each and every one of us here in this room to open doors for you. 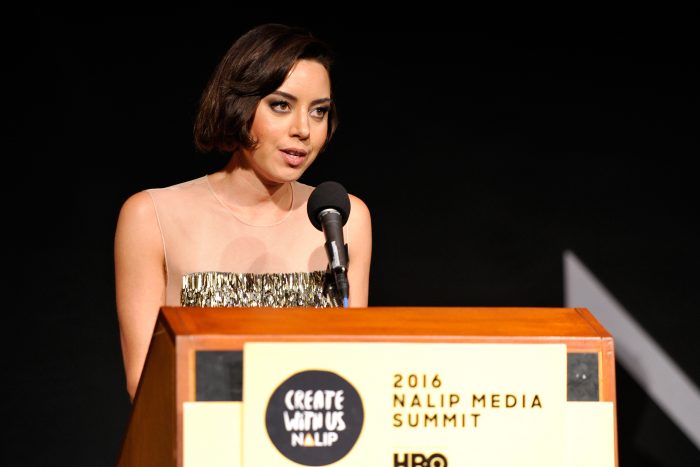 I feel like I don’t deserve this award yet, but I’m so honored. Thank you so much for having me. It’s so cool to get an award in the name of Lupe [Ontiveros]. She was such a badass. For so long she was subjected to playing stereotypical roles, but she always transcended them and she always play her parts with such depth and nuance. I can only hope that I will do that as I go. I will try to that for her.

Aubrey Plaza on People Not Believing She Is Boricua

I’m so grateful to be part of the NALIP family and thankful to receive this award from an organization that continually makes efforts towards for advocacy and advancement of diversity in media. I’m proud to join the cause, and I’m proud to be part of this community. I dedicate this award to my family, my culture, and this beautiful community that I’m a part of. It’s yet another thing that I can use to prove to everybody that I am Puerto Rican. That’s where I got my crazy shit from. People have to recognize that and I will continue to accept any award that allows me remind people, “You must recognize that this is what’s up, and we are to stay and we are going to fuck some shit up. 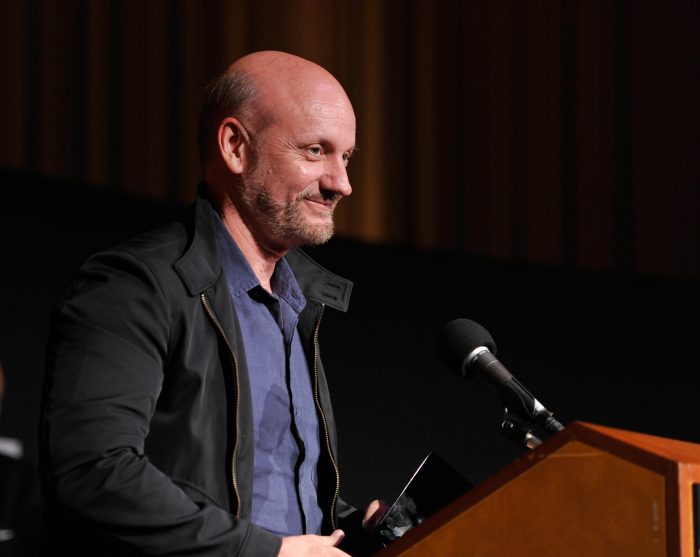 I feel like the new kid on the block here. Everyone has worked together and loves each other, and I’m the newcomer here. I don’t know if I should speak English or Spanish, if everyone speaks Spanish except for one or two people. It’s when Spanish-speaking people get together and someone brings their girlfriend who speaks English and everybody has to speak English. Thank you for this award, it surprised me when they told me very much. I have worked in Argentina and the United States extensively but I always consider myself to be a little bit of an outsider here and I wanted to thank NALIP for correcting that.

Alice Braga on Brazilians Being Latinos

I’m Brazilian and a lot of people say, “Brazilians aren’t Latino” but we are Latinos! Thank you for bringing more awareness to our talent and being on this stage for me tonight is really special because of that. I really would like to thank NALIP because it’s an association that I really admire especially because of the workshops and all the investment into people that are struggling to make their projects happen. I think all of us know how hard it is and how lonely it is for all of us to achieve what we want. 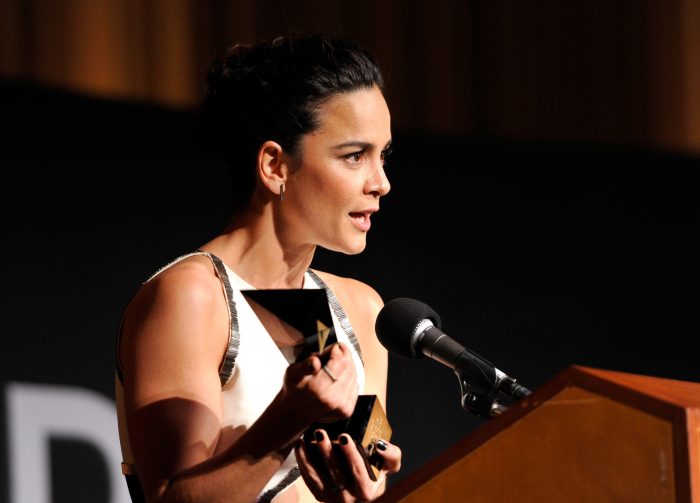 Rita Moreno on Tony Plana’s Legacy in the Film Industry

This is a man that has advanced the visibility and capabilities of the Latino community for the past 40 years challenging stereotype after stereotype and changing the face of and narrative for how characters can be constructed and who can end up portraying tem. When we think of lifetime achievement we automatically think about someone who has achieved a high level of success, someone who has made a lasting impact in this industry, someone whose name is considered timeless and legendary, well Tony Plana represents that and so much more. This is a man who has taken success as an actor and director and applied to helping enrich the lives of those who hope to reach great heights also, volunteering as a spokesperson for comprehensive immigration reform, and using his powerful storytelling powers to raise the voice of a community that longs to be heard.

This is my third lifetime achievement award. I guess they are trying to say goodbye and I’m not listening. All these lifetime achievement awards are going to be changed to “Half-Time Achievement Awards” because, just like Rita, we are not done. I’m so thankful because whenever you receive a lifetime achievement award, whether you like it or not, you have to reflect on where you come from and what you have accomplished. This year is 40 years since my first paycheck, and you will laugh because it was 900 dollars in 1976 and I guest-starred on a show called What’s Happening! …. In those 40 years I’ve played every Latino stereotype except for the pregnant teenager, but being a character actor I’m ready for that challenge. 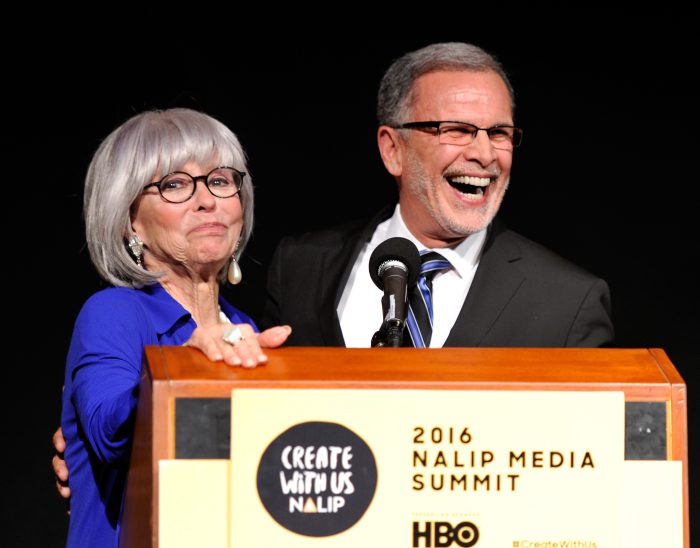 Tony Plana on Being Mistaken for Other Actors

Tony Plana on His Immigrant Parents

When I think back I think about the fact that I’m an immigrant.I came here when I was 8-years-old. My parents sacrificed everything for freedom, for a change for me to do what I’m doing now, I don’t think that I would have that kind of love to sacrifice so much for my children. They gave up their lives, and you only get it once. I want to honor them tonight. They are here. They are not here physically, but they are here.