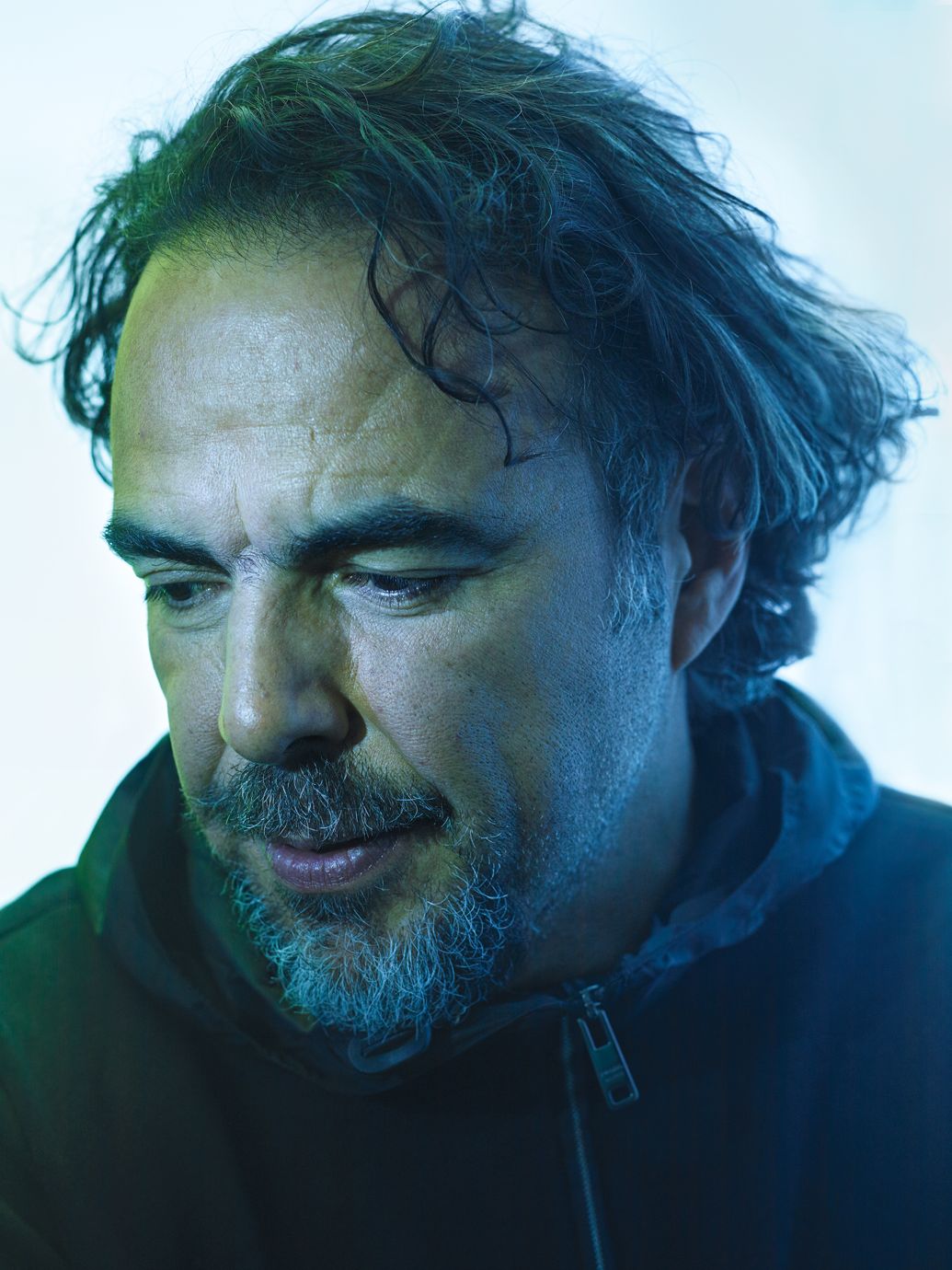 How the director of "The Revenant" pushed his stars and crew to the edge of sanity – and created a modern epic.

Late one afternoon in November, only two days after wrapping up final post-production tweaks on his sixth film, The Revenant, the director Alejandro González Iñárritu walked into a screening room at the corner of Alfred Hitchcock Drive on the Universal Studios lot in Universal City, California. He was dressed entirely in black, his typical uniform – today, a couture-looking hoodie with extraneous silver zippers, worn over black jeans – and he greeted the assembled audio crew with fist bumps and apologies for his tardiness. He'd driven up from his production office in Santa Monica, where he also lives, and hit traffic, which he normally avoids by zipping around town on a Vespa. Somebody got him a Coke.

Iñárritu, 52, moved to Los Angeles from Mexico City, his hometown, after the wholly unexpected global success of his first film, 2000's Amores Perros, which in English roughly translates as "love's a bitch" – U.S. distributors eventually decided to stick with the Spanish title – and which convinced him to leave the safe confines of the Mexican film community, where he'd spent years as a highly successful director of TV commercials, building a production company with more than 100 employees, and make the move to the big leagues, to Hollywood. When would the timing possibly be better?

He landed at LAX with his wife and two children four days before September 11th, 2001. "All the neighborhoods started getting all these flags," Iñárritu says, speaking in heavily accented English. On two occasions, walking his dog, he was stopped by police officers. The cops told Iñárritu, whose swarthy complexion had earned him the nickname "El Negro" back in Mexico City, they'd received calls about a suspicious character in the area, that he needed to show them exactly where he lived.

Today, Iñárritu is listening to audio mixes of The Revenant for theaters outfitted with Dolby Atmos surround-sound. "Every time they invent a new fucking system, we have to do a new test," Iñárritu says with a sigh. "Pretty soon we'll have sounds coming out of our asses." The day before, he'd been to a similar test for the IMAX version of the picture. "Sitting too close to the screen, it's almost disturbing," he says. "They'll need to give the audience bags to vomit."

Iñárritu, we should note, utters all of these lines quite cheerily. He still curses in English with the mirth of a non-native speaker testing unfamiliar idioms, all of his "fuckings" pronounced with more care than other words and delivered with an unjaded relish. When Iñárritu smiles – perhaps because his smiles always seem tinged with irony – his face, thin, with pronounced cheekbones, a mustache and a slightly tufted goatee, assumes a sly, devilish cast. With minimal wardrobe and makeup adjustments, he could play the heavy in an after-school special about the dangers of Satanism.

In a medium-size theater, two sound engineers sit in front of a mixing board that spans the length of the screen. Martín Hernández, one of Iñárritu's oldest friends and collaborators, works at a laptop. We're about to watch Reel 4 of The Revenant.

Loosely based on the real-life adventure of a 19th-century American fur trapper named Hugh Glass, the film stars a prodigiously bearded Leonardo DiCaprio, who is mauled by a bear and then betrayed and left for dead by other members of his hunting party. The rest of the movie, on one level, is an immensely satisfying genre exercise, a proto-Western revenge fantasia in the tradition of Death Wish or Kill Bill, in which the audience endures the cruel sufferings of the protagonist as a pleasure-enhancing prelude to feats of impossible endurance, survival and bloody restitution.

Visually, the film is a spectacular throwback, the sort of epic rarely seen since the era of Lawrence of Arabia. It's also a sustained spiritual meditation, as well as an implicit critique of American capitalism, as told through its earliest incursions into the relatively untouched wilderness of the New World. If Iñárritu wins Best Director for The Revenant, which people who make odds on this sort of thing have been saying is entirely plausible, it will follow his win last year for Birdman, making him only the third director in Academy of Motion Pictures Arts and Sciences history to snag consecutive Oscars. 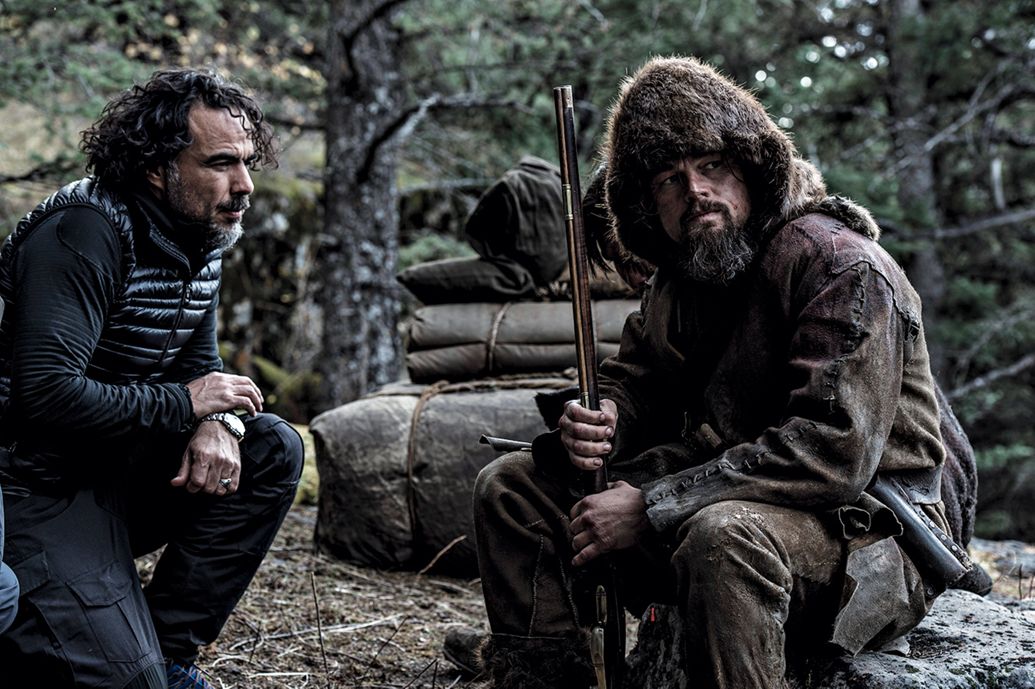 It's funny, though: For all of his accomplishments in Hollywood, Iñárritu still describes himself as a frustrated musician. He and Hernández began working together in college as disc jockeys at a pioneering radio station in Mexico City. Iñárritu also played in a band and promoted shows, and he admits to paying special, almost obsessive attention to the sound of his films. "For Alejandro, sound can be more important than visual," says Hernández. "He has an amazing sound memory. If I change something, he will hear it." Iñárritu thought of Birdman, filmed to appear as if it unfolded in a single, frenetic tracking shot, as jazz: He went into a studio with the Mexican jazz drummer Antonio Sánchez and began recording the soundtrack (almost exclusively percussion) before he'd shot a frame of film, matching the beats with specific lines of dialogue in order to pre-dictate, in Iñárritu's words, "the pulse of the film."

For The Revenant, he commissioned a spare electronic score from Ryuichi Sakamoto and Alva Noto, avant-garde composers who have collaborated with Carsten Nicolai on a series of gorgeous, minimalist piano albums, and Bryce Dessner of the Brooklyn band the National. "If Birdman has to do more with jazz and theater," Iñárritu tells me, "I think this film is more about painting and dreams, when you don't have to think or talk, but just feel. So the silences and the sounds of nature are very, very important to the narrative."

Reel 4 begins with DiCaprio's character lying on a wintry forest bed, staring up at the old-growth trees towering above him like the ceiling of a cathedral, and ends with a thrilling chase scene in which he dives into a river to escape a band of Arikara Indians. As the scene progresses, we watch DiCaprio grunt, gasp, crawl through snow and suck the marrow from the bone of a picked-over buffalo carcass.

Iñárritu sits with his arms crossed and a serious expression on his face. When the lights come up, everyone looks at him anxiously. Eventually, he emits a long "Ummmm . . ." Then he says he's not hearing the ambient sounds coming out of the ceiling speakers, not nearly enough. "It's like one cojone, and we need two cojones!" he cries, mock-dramatically. "I want to hear more crackling trees. Make the birds louder! If it's at 30 percent, go to 60 percent. Then maybe I say, 'Oh, fuck, too loud!' And we can take it down. Show me the money, as the producer would say."

While the engineers tweak the settings on their boards, Iñárritu asks for a second Coke and picks at a plastic tub of peanuts, methodically removing one nut at a time with a thumb-finger pincer gesture. He has to wrap up soon. The next day he's planning to fly to Austin with his son, Eliseo, a senior in high school, for a college tour arranged by Richard Linklater, the Boyhood director and renowned Austinite who also happened to be Iñárritu's prime rival at the 2015 Oscars. (Birdman wound up beating Boyhood for both Best Director and Picture.) I ask Iñárritu if it's typical for directors to be this involved with the sound mix of a rarefied distribution format. He frowns and gives a shrug. "Ask them," he says, nodding at the sound guys. "I don't think so. I'm a little cuckoo. Neurotic." He pronounces the last word with special gusto, just like he does "fuck."

A week after the sound tests at Universal, Iñárritu flew to New York for a private screening of The Revenant near Lincoln Center. Afterward, Martin Scorsese moderated a Q&A and called the film a masterpiece. Scorsese had just completed his own historical epic, Silence, filmed in the Taiwanese countryside, and later, over drinks, he complained to Iñárritu, "I'm from New York. I have an aversion to trees. I don't go camping. I don't like horses." Iñárritu could sympathize. "I'm the same," he tells me the following afternoon. "We are not, like, guys from the woods."

Iñárritu is dressed entirely in black again, sipping a black coffee in a hotel near Central Park. His son is staying in the room across the hall. A last-minute scheduling conflict had forced the postponement of the Austin visit, but they are planning to check out New York University. Since the ISIS terror attacks in Paris, Iñárritu has also been in regular phone contact with his daughter, María, who is going to school there. "I'm concerned about her," he says. "You know, we went out of Mexico because of the violence. And now I'm more worried in Paris than in Mexico. I said, 'Fuck, the world is becoming very scary for young people.' They are feeling what we felt in Mexico."

Around the time of the release of Amores Perros, Iñárritu's mother had her jaw broken by muggers, and his father, in a separate incident, was thrown into the trunk of a car by kidnappers and held for 12 hours for a $500 ransom. Iñárritu had his own car broken into and all of his family's luggage stolen while on vacation in San Miguel de Allende; afterward, he had to fly directly to New York to accept an award, and he borrowed "an old suit of stripes" from a friend, "the worst, cheapest suit ever – it's from 1948. I was the worst-dressed director in the history of New York fancy people." That trip was the first time Iñárritu met Scorsese, as it turns out – Scorsese liked Amores Perros and had invited Iñárritu to stop by his office – and Iñárritu showed up in the suit, feeling "like a fucking Mafia guy from a Scorsese film."

The rising violence in his home country, coming at a time when his own public profile was increasing, factored heavily into Iñárritu's decision to move his family to L.A. He says it also informed his approach to violence in his films. "The violence became such a painful social situation in my country, with so much suffering, that I didn't find it funny in films," he says.

Check out the rest on rollingstone.com.