Al Madrigal may very well be the consummate entrepreneurial entertainer. His friends dub him the “business comic” while his colleagues at The Daily Show (where he was the Senior Latino Correspondent) nicknamed him ABS, seeing as he’s Always Be Scheming. When he’s not playing what he describes as the “ethnic friend” on sitcoms like About a Boy or Free Agents or prepping his latest standup special (his one-hour comedic documentary special, Half Like Me, premiered on Fusion last year), he’s working on his comedy network All Things Comedy and dreaming up a Latino Comedy Festival. Somehow, though, the prolific performer still found the time to talk about his career with candor at the NALIP Media Summit in Los Angeles.

During the conversation organized by the National Association of Latino Independent Producers and moderated by cartoonist and writer Lalo Alcaraz, the late-blooming Latino stand-up comedian and actor talked about how he went from making a career firing people to being the lead in Fox’s The Ortegas, a sitcom which co-starred Cheech Marin that never aired any of its six shot episodes, and how he found himself where he is today: an outspoken champion of Latino talent.

One message was clear throughout the lively discussion: there should be more Latinos on TV. “We really need to do something,” he said to those in attendance, “and I will take every single bit of help that any of you have to offer. I have business cards with my phone number on them and one of my nine email addresses. We will absolutely make this happen.” Once he started to talking about scouting and promoting new talent, connecting them with reps and helping them develop their own shows during an annual showcase for Latino comedians, you got a sense that he’s not gonna stop until complaints about lack of Latinos in American media feel like a thing of the past.

The charismatic San Francisco native had plenty of wisdom to dole out. But don’t take it from us. In his own words, here are 5 life and career lessons we could all learn from Al Madrigal. 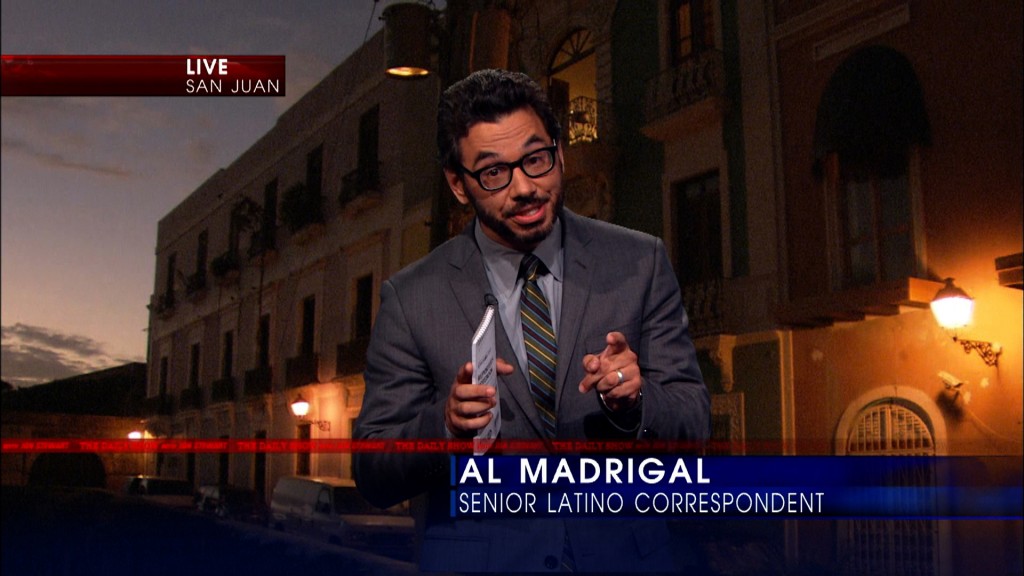 I started in San Francisco where I started to work for my parents’ family business. My mom has this amazing success story. She worked for $6/hr. She was a secretary and my dad was a teamster. And then my mom worked her way up the company. Bought the company. Quadrupled the company in size. I went to work for her immediately after. If you saw Up in the Air with George Clooney I used to do that. I fired people. I fired my first person at 19 years old. I worked at that company until I was 32. Started doing stand-up when I was 28 because I was crying at my desk. I mean, it was horrible. And I knew I didn’t want to do this. People always told me I was funny and I knew that I loved stand-up comedy. I gave it a shot and then in 2002 I went to the Montreal Just for Laughs Comedy Festival. I was cast in a nationwide search for Latino comedian — for The Ortegas, which was a big kick in the tits. We were promised we were going to air after The Simpsons on November. We were an NBC show. But we moved to Fox. We shot 6 or 7 episodes. I bought a car for cash the day before we were cancelled. The day the episode order was cut, I caught the script coordinator crying. I was sitting in the stands in a pilgrim costume and I was in shock because I didn’t know what to do. And then I think I’ve been in nine network pilots as a lot of “ethnic friends.”

Find the Humor Where You Can

Network TV knew they had to color up the show. They didn’t care how they were doing it. There was no rhyme or reason for how they were doing it. I went in to audition for No Ordinary Family. It was an ABC show with Michael Chiklis about superheroes. The casting was this Chinese guy, me, and Michael Strahan. The three of us sitting on a couch. And I saw Michael Strahan walking around with his notes and that’s when I thought it was my time to toss it back to Michael Strahan. So I walked up to him, he’s this gigantic man, looked at him and said, “Hey! I think this means no more Brothers” — which was this show he was on. He looked at me and smiled that gap-toothed smile and I go “So let me get this straight: you have the subway commercials, you are on the Fox Sunday show, go out and then probably do personal appearances, you won the Superbowl, played in the NFL for ten years and now you come into MY house?” I looked at him and said, “I’M ethnic friend!” And he doubled over that.

Be Nice to Everyone You Meet and Aim For Mailbox Money

I was in this show Free Agents on NBC that got cancelled and pretty much when it hit Deadline I got a call from The Daily Show asking if I wanted to join the show full time. Quick backstory on how I got The Daily Show: Cheech, our first day of shooting a pilot, he took me out to lunch. We go out to Santa Monica and he told me, “I’m gonna tell you two things that you need to remember: be nice to everyone you encounter, and you need mailbox money.” He said, “I own every album, I started directing the movies,” and he goes — insight into finances! — “every time I go to mailbox I get a check for $30,000, $40,000, $18,000.” He said, “You want as much mailbox money as possible. So own everything that you possibly can.”

I got that Daily Show gig because somebody asked me to do a guest set in Miami. And I said, “Sure, no problem.” I had no idea who the guy was. And that guy today is the executive producer of the The Daily Show who saw me do stand-up years later in New York and said that I’d be a perfect correspondent. We’d just have to ask Jon. He said we should write together and we wrote a piece [on undocumented workers in Texas] and Jon saw it and liked it. So I went back to my family and said, “Hey! I got a great opportunity! It’s in New York! Who wants to go?” And everyone said, “Oh, no. We prefer it if you kill yourself slowly and commute back and forth.” So everyone stayed in Pasadena and I flew back and forth for two and a half years.

Around 2011 I realized I didn’t want to be controlled by executives or by anybody else. I just wanted to make my own way. So I started — this is so ambitious — my own comedy network called All Things Comedy. We started as a podcast network. We have about 65 podcasts right now. All professional comedians. The list is amazing of all the people we have on our roster. We have about 6 million listeners per month. We just have our first investors to grow the network. So what I want to do, why I picked the name “All Things Comedy” is I do want to start my own digital network but where the comedians actually own it. All the comics that are participating would be profit-sharing and so when we take this on we will be branded entertainment. We are going to be our own content and eventually start the production company that goes along with this. To really be a home for all things comedy. It’s a gigantic pain on my ass but I work on it nonstop. It’s sort of a United Artists kind of idea. I really do feel like we’re all pretty selfish: we have our jobs and our families that gets in the way a lot. But if, again, if you come together, it’s amazing what can happen. So it’s something that I want to build.

When In Doubt, Do as NPH Does

I read this amazing interview with Neil Patrick Harris who said the best advice he ever got in Hollywood — and it’s been how I’ve been thinking since — was from a producer on Doogie Howser, M.D. He sat Neil with his family from New Mexico down and said, “We’re on an amazing run. It’s a great wave. It’s gonna be a short one. It’s gonna be a long one. But you are a surfer. And you’re going to enjoy the wave, enjoy the ride. And then it’s gonna end and you’re gonna swim back out. May have to wait a little bit but then another wave is gonna wave. Just enjoy the time in between and wait to catch another wave. That’s all this is and the hard work doesn’t make the waves come faster but don’t panic.” We’re all gonna have disappointments and you really can’t worry about. All of this is out of our control.