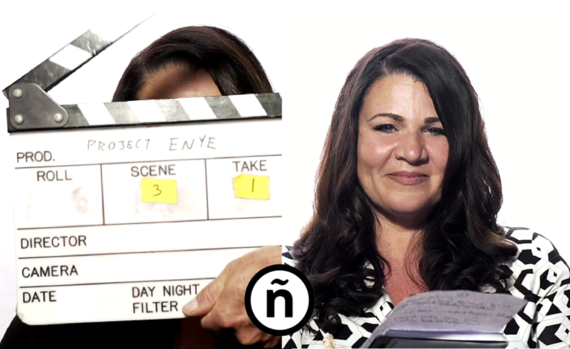 I spent the last few days attending the Sundance Film Festival in Park City, UT. If you've never been, it is surreal. The town was bustling with filmmakers, actors, industry folks and film buffs all vying to see the selected films, make an appearance at parties and hobnob their way into new opportunities. The enthusiasm was palpable and contagious and I was excited to be a part of it!

As a first-time attendee, I was really curious and excited to experience firsthand what happened while festival veterans and newbies wait in line to get into a screening. Who would I meet? What would we talk about? Would I recognize anyone famous!?

As soon as we arrived in Park City, Henry Ansbacher, producing partner and co-creator of Project Enye (ñ), and I made a b-line to the first screening of Sundance's Documentary Shorts program. This was the category we would have been featured in, but unfortunately were not selected. (Next year!) Henry and I were dying to see what had been selected. More than 12,000 films were submitted this year and less than two percent were chosen.

While waiting in line, we met a New York transplant and festival veteran. After a fair amount of pleasantries, I found myself in an interesting conversation with her. She asked if I'd considered the fact that adding "Latina" to filmmaker might lessen the value that I bring to the table. She compared it to "female filmmaker" and even "first-time filmmaker."

As we talked some more, I learned she was a linguist by profession and while she acknowledged that there are many branches of the profession, what we were discussing was how certain words give things power or take that power away. In all honesty, I'd never thought about it like that.

By describing myself as a "first-time Latina filmmaker," was I buying into the notion of being good, but not that good? Was I conveying that somehow I fell short of the industry bar?

It was a mind-expanding conversation.

She said, "Why can't you just be a filmmaker? Why can't that be good enough? When do you stop being a Latina or female filmmaker and just be a filmmaker? Are these descriptors helping or hindering you? And more importantly, is there an implied lower standard or special standard baked into that which takes away your power?"

I was speechless -- a rare occurrence for those that know me. I stood there pondering these questions and deciding how I felt about them.

In this particular case, I'm torn. I believe we as Latinos haven't yet reached that threshold where "It doesn't matter how you're different, there's plenty of room at the top."

Sundance was further proof of this skewed inequity. While there were some Latinos in attendance and on the big screen, the representation was nowhere near what it should be considering Latinos are the fastest growing population in the United States.

In so many ways it feels like we've only just started pushing back at the inequities that we've seen year after year in our jobs, in the media, at school, in the world and most recently at the Oscars.

The following day, I attended a Latino Filmmakers event and I was honored to be among so many fellow Latino filmmakers, screenwriters, directors and industry folks who did what they had to do to get themselves to "that place" and pave the way for other filmmakers like myself. It was here that I realized the word Latina is a distinctive badge of honor.

While the conversation I had in line with that festival goer empowered me to see things from a different perspective, it reaffirmed my mission to hopefully be in a position one day to reach my hand back and help another fellow Latina(o) reach their sueños and metas.

I wholeheartedly embrace my Latina-ness and believe "Latina" is an empowering adjective that lays claim to a future where female Latinas will be more aptly represented both in front and behind the camera.

Until then, I will continue to proudly describe myself as a "Latina filmmaker" because I want the whole world to know, we're on the move and we're coming for our overdue slice of Hollywood.

Check this out on Huffingtonpost.com