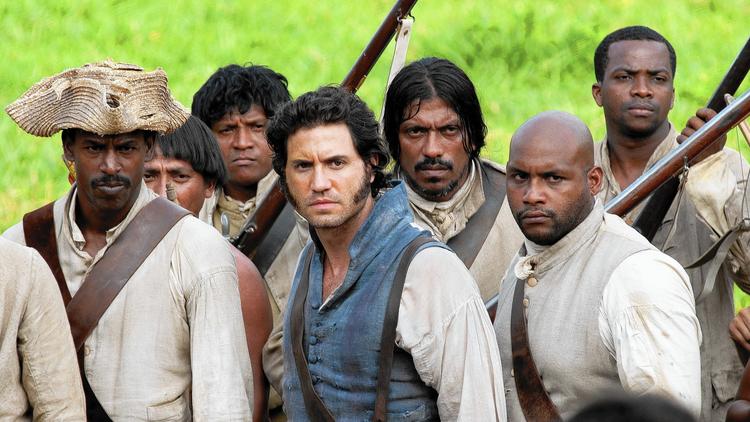 Edgar Ramirez in "The Liberator." (Cohen Media Group)
By LORRAINE ALI from the Los Angeles Times

Unless you were raised in Latin America, there's a good chance you know little about Simón Bolívar, and that's exactly what director Alberto Arvelo expected.

The Venezuelan filmmaker's biopic of the revolutionary Bolívar opens with this eloquent primer:

"Simón Bolívar fought over 100 battles against the Spanish Empire in South America. He rode over 70,000 miles on horseback. His military campaigns covered twice the territory of Alexander the Great. His army never conquered — it liberated."

Simple enough for audiences who know nothing about Bolívar, poetic enough for those who grew up reading aboutEl Libertador in school books. It's a tricky line to walk, but Arvelo manages to do it over and over in this compelling and lush Spanish-language film.

"The Liberator" is set in South America at the turn of the 19th century, where tangled junglescapes, mossy colonial architecture and butterfly-inhabited meadows abound. But within all that beauty lies tyranny — the Spanish Empire has ruled the region for 300 years, enslaving Africans, massacring the indigenous and crushing anyone who opposes colonization.

Bolívar (Édgar Ramírez) is a wealthy young Venezuelan from a prestigious family, immune to the injustice suffered by most of his countrymen. But he's predisposed to the idea of equality for all thanks to the early teachings of his socialist-leaning tutor and his near-familial bonds to the African slaves who raise him. When a devastating personal loss causes Bolívar to leave the insulated family estate, he finds purpose in the fight for Venezuela's independence.

He finances a meager military campaign against the powerful Spanish forces and ultimately is defeated. Exiled to the jungle, he begins to galvanize races, tribes and neighboring states around the idea of fighting for one united sovereign country that would span much of Latin America.

In a David and Goliath attempt to overthrow the Spanish Crown, Bolívar and his people's army crisscross the continent and change the course of history.

Ramírez, a former Venezuelan telenovela star, portrays Bolívar as a sensitive and impressionable young man who evolves into a passionate and resolute leader over three decades until his demise in 1830. Though Ramírez never goes incredibly deep into Bolívar's psyche or motivations, he's persuasive — or perhaps inspiring enough — to follow into battle.

And there are lots of battles.

Blood is spilled on beaches, riverbanks, slave quarters and muddy streets. Pitchforks and machetes versus cannons and rifles in sugar cane fields and atop strategic bridges. 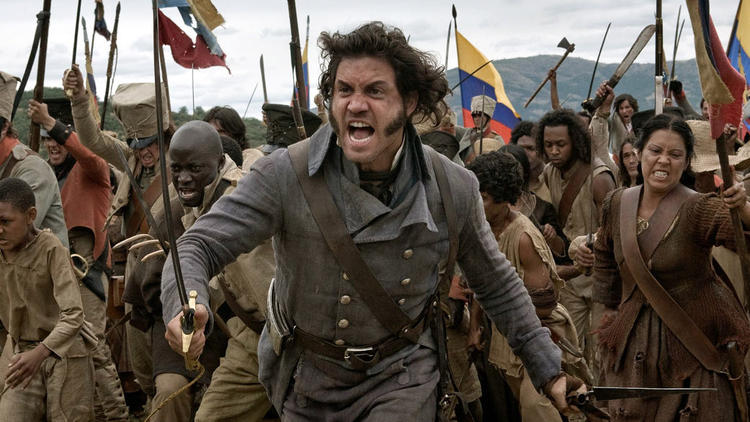 Despite the carnage, Bolívar manages to rile the troops with passionate speeches on freedom, equality and dignity — themes that resonate today be it in Ferguson, Mo., or Ukraine. Screenwriter Timothy J. Sexton ("Children of Men") apparently reworked the script many times over to get it right, and the writing here is as refined as it is moving. There are, however, a few speeches too many, which feels a bit redundant if not lofty at points.

Shot in Venezuela and Spain, the scenery and locations are beautiful — from the royal palace grounds in Spain to the thick canopy of the Amazon. An emotive score by the L.A. Philharmonic's Gustavo Dudamel adds to the majesty, layering more drama atop this historic drama.

"The Liberator" may be too romantic and sweeping for some, but right now, do we really need another gritty, dark film about the murky realities of war?

The admittedly simple premise — that El Libertador fought the good fight, for a worthy cause — is refreshingly escapist. By only briefly addressing the complications of Bolívar's later life as a ruler, it lets us revel in the antiquated notion, if only for a couple of hours, that there are some battles worth fighting.

Check this out at the Los Angeles Times.