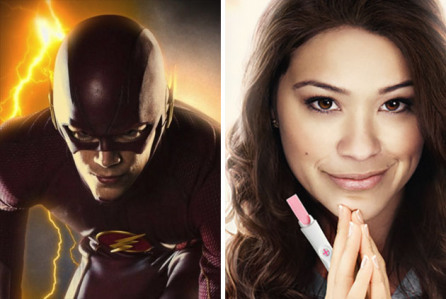 Absolutely no surprise here — after a strong ratings start, the CW’s two freshman series, The Flash and Jane The Virgin, which garnered some of the strongest reviews for new shows this fall, are getting full-season orders. The network was so bullish on both, it gave both additional three-script orders before they had gone on the air. Then The Flash shattered the CW’s ratings records with the most watched series premiere in the network’s history, 6.1 million in Live+3. The superhero drama held well in Week 2 with a modest decline.

Meanwhile, Jane The Virgin is holding ground on Monday, helping the night to post big year-to-year gains. Jane held very well in its second airing last night, currently running a tenth ahead of last Monday’s premiere. Both series are producing breakout stars, especially Jane‘s Gina Rodriguez, who is getting a lot of buzz.

“We have had a fantastic start to our season this year, with The Flash launching as our most-watched series premiere ever, and Jane The Virgin recognized as the best new show this season by critics across the country,” said the CW president Mark Pedowitz. “Over the past three seasons, we have made it our mission to grow and to broaden out our audience, and to keep raising the bar with the quality and impact of our new shows, and The Flash and Jane have both exceeded our expectations on all counts.”

The Flash, based on the DC characters, is produced by Berlanti Productions and Warner Bros. Television, with executive producers Greg Berlanti, Andrew Kreisberg, David Nutter  and Sarah Schechter.  This series is based upon characters published by DC Entertainment.

Jane The Virgin, based on the Venezuelan telenovela, is produced by CBS Television Studios and Warner Bros. Television, in association with Electus, with executive producers Jennie Snyder Urman, Ben Silverman, Gary Pearl and Jorge Granier.

Check this out at Deadline|Hollywood.