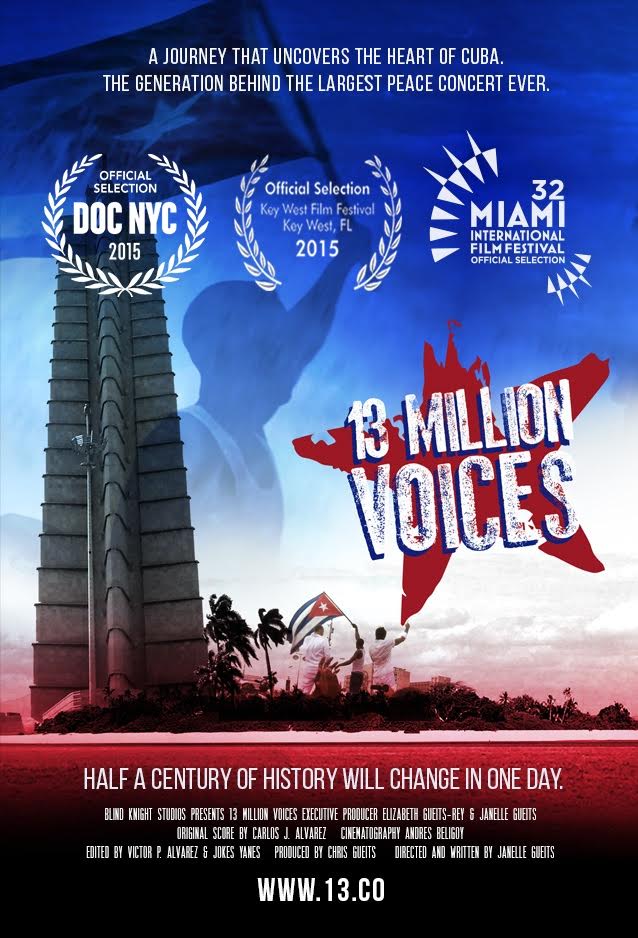 13 MILLION VOICES is an Official Selection of DOC NYC with it's NYC Premiere on Friday, November 13th, 2015. Playing to sold out theaters, this timely feature documentary on Cuba was hailed a "must see" film during the 2015 Miami International Film Festival.

As celebrities flock to Cuba and pose for photo-ops with dignitaries, this film provides rare access to the generation whose struggle far from the limelight created the pressure for changes in Cuba today, and the groundbreaking international event that ultimately tipped the scales of history.

Audiences across nationalities commonly share that 13 Million Voices moves them like no documentary before. The film will also close Key West Film Festival on November 22nd 2015, is under consideration for a 2016 Cinema of Peace award, and will tour this winter.


SYNOPSIS
Before the American flag could be raised in Havana, one concert and 1.3 million concert-goers changed everything.  Go behind-the-scenes of one of the world’s largest concerts ever - headlined by Latin superstar Juanes in Havana - as 13 Million Voices traces a ten-year journey of American youth risking their freedom to share with the world Cuba’s young voices fighting for their own. As the biggest international names in music and youth leaders confront 60 years of conflict, a concert breaks through historic barriers to give voice to a generation creating a new day in Cuba.


“13 Million Voices" chronicles the journey of Cuban Youth Leaders from 2004 until announcement on U.S.-Cuba relations in 2014. The film also examines the challenges surrounding the 2009 Peace Without Borders' International Concert, one of the top 5 concerts ever attended and largest event for peace in world history, that changed the course of history. The concert boasts such international headliners as Juanes, Miguel Bosé, Olga Tañon, Jovanotti, Orishas, and Carlos Varela.This film was completed just days before the historic announcement to restore relations between the U.S. and Cuba, and shows the threats and opportunities that lead to that moment.”


DIRECTORS STATEMENT
Over the last decade, I have had the privilege of connecting with hundreds of unsung Cuban heroes. They have sacrificed tremendously - some even paying with their lives - to struggle against the tides of historic barriers, fear, and political oppression. Poignantly, they have come together in a brotherhood of shared humanity, respect for our innate diversity, and pursuit of the universal rights of men and women to live in peace. This film was made to cast a spotlight on these Cuban voices to shed light on their hand on writing history and call for the rightful support they deserve to forge a bold and hopeful future.


Why should the public care about this film today?

•    After the historic announcement to restore communication between the U.S. and Cuba this film is an emblematic of the courageous people struggling for change.
•    For the curious, it’s an unprecedented view behind the gates of a closed Cuba, and the roller-coaster experience of creating one of the greatest concerts of all time.
•    For anyone who supports freedom of expression, this is a modern-day story of the courage and will of a people to be heard.
•    For Cuba watchers, this historic concert was a tipping point in U.S.-Cuba relations and contextualizes both the threats and opportunities of this moment in time.
•    For the music lover, discover the censored sounds of the Cuban underground (hip-hop, rock and Latin fusion) music scene and the generation that it represents.