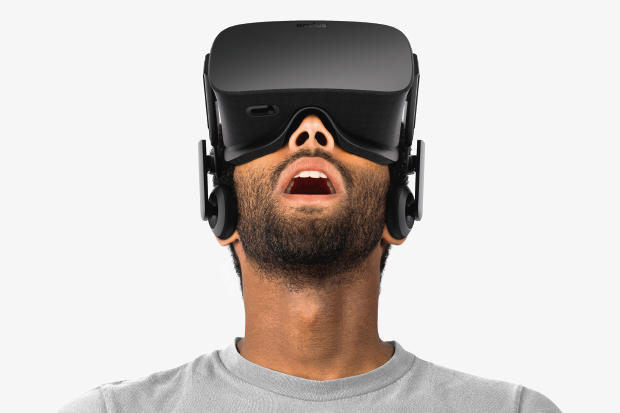 Oculus Rift. It sounds like something from a science fiction novel, and in many ways it is. Its release this week is the first stirring of a future stuffed with virtual reality headsets. The hope of its Californian engineers and their bitcoin backers is that we, the consumers, will soon use them to spend a whole lot of time outside of our lives. Strap the goggles to your face, position the headphones over your ears, press the on button, and — bzzzztp — you’re in a different world.

The question is, who will create these worlds? The first prototype of the Oculus Rift was built five years ago by an 18-year-old called Palmer Luckey, and he had an 18-year-old’s use for it: video games. Luckey was obsessed with video games to the point where he wanted to jump in and feel as though he were walking around them. Others had this yearning too. Big shots in the gaming industry tried out Luckey’s tech, and various light bulbs, cash registers and bugle calls went off in their heads. This, they thought, would be a playground for game designers and gamers.

Five years later, Luckey is many millions of dollars richer, and his creation is still marketed more as a gaming device than anything else. But other art forms are now being co-opted to the cause — including cinema. At last year’s Sundance Film Festival, Oculus didn’t just announce the birth of their Story Studio, they also showed baby’s first movie. This five-minute animated short, called Lost and directed by a former employee of Pixar, places its begoggled viewers in the middle of a forest. They look around. What’s that in the undergrowth? Oh, it’s a severed robotic hand. Can you hear that noise? It’s the robot coming to find it.

Lost has since been surpassed by another film from the Oculus Story Studio. This one, Henry, brings us into the house of an animated hedgehog as he prepares for his birthday party. The plot, to the extent that there is one, is sweet but not exactly cutting edge: poor Henry is lonely because his spikes keep him out of hug’s reach of other cartoon critters. What is cutting edge is the way Henry communicates his sadness — by finding and gazing into the viewer’s eyes. He acknowledges your presence because, in a weird sort of way, that’s what you are: present.

Of course, it’s not actually Henry doing this (sorry, kids). This cutesy little hedgehog seems to know where you are in his house because he has been coded that way, making this as much a computer program as a traditional movie. In fact, both Henry and Lost were realised in a program known as Unreal Engine 4 that is normally used for making video games. They are not so far removed from what Luckey envisioned for his headset in the first place.

But not all VR movies are related to video games, nor even animated. For their documentary-style short Waves of Grace, Gabo Arora and Chris Milk took a camera capable of shooting in 360 degrees into the all-round horror of Liberia’s ebola outbreak. Among the sights they captured is an open grave as a phalanx of health workers drop off yet another body. You can look down into it. There’s no need for the interactive trickery of Henry here. People still seem to meet your gaze, but in fact they were looking at the camera as it passes them by.

Filmmakers will have to learn new methods if they want to work in these virtual realities — and so will their audiences. Ever since its beginning, cinema has had a certain kind of fixity to it. We all see the same images on the screen, even if we interpret them in different ways. But now, with VR movies, people can choose their own images like never before. An expensive action sequence can be a great nothingness if viewers decide to stare at a pretty extra instead. Dialogue can be turned into a voiceover narration with a twist of the neck. Editing and camera angles lose meaning.

This might even provoke some good old-fashioned moral dilemmas. Critics talk about a sex scene or a murder being shot ‘tastefully’ if the camera retreats from the stickiest or bloodiest moments. So what does it say about you, you sicko, if you keep on watching? If you lean in for closer look?

The real test will come if — or when — the interactive promise ofHenry coalesces with the live-action filmmaking that we are used to. A virtual reality remake of Titanic could allow you to push Leo overboard and make off with Kate in a lifeboat, well before any icebergs heave into view. Movies could become participatory in ways that not only pornographers will exploit.

All of this might sound preposterous. Perhaps it is. There are various impediments to be overcome before we can watch Titanic: With a Vengeance, some of which are technological, many of which are to do with the marketplace. At £499, Oculus Rift isn’t cheap. Neither is one of its early rivals, the £689 HTC Vive. These headsets might not be priced to catch on, particularly if they are uncomfortable to wear. There are already concerns that some people get motion sickness when they look around a virtual world.

But film fans should refrain from dismissing virtual reality as a gimmick just yet, not least because film has done very well out of gimmicks. Its practitioners began by blending photography and music and theatre, and then they added talking, colour, special effects and 3-D along the way. Even the failures, such as Hans Laube’s infamous Smell-O-Vision, have been successes of a sort. They are all part of the constant technological striving that, to some extent, defines cinema as a medium.

Who knows? Perhaps this endless evolution will take us outside of cinema itself, into the unknown, and cause us to rewrite our previous definitions. The mighty Werner Herzog, who recently completed a documentary about our digitised world, seems to believe that this is where virtual reality belongs already.

‘I am convinced that this is not going to be an extension of cinema or 3-D cinema or video games,’ he told the New Yorker recently. ‘It is something new, different, and not experienced yet.’

Well, Werner, pop down to your local Currys — we can all experience it now.

Check this out at www.spectator.co.uk