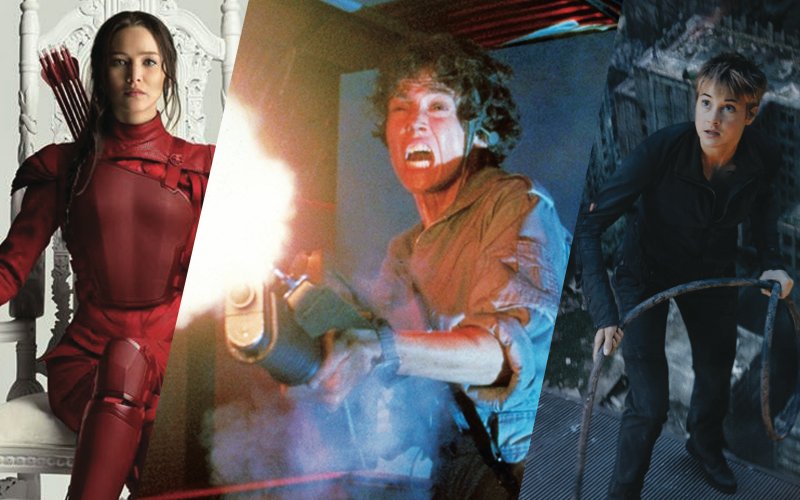 From the Alien franchise to Mad Max: Fury Road to The Hunger Games, why can women only kick ass in science fiction, instead of the present?

In a year where the box office has yielded four films with debuts over $100 million—the best since 2012—it seems inevitable that alongside the successes come some failures. As Terminator: Genisys joins the ranks of Tomorrowland and Jupiter Ascending, what’s been a welcome surprise is that the conversation around these films’ struggles to reach the public have focused on their merits and not their contents. If it seemed in years past that if any film starring a woman failed it might be seen as a commentary on the viability of women at the box office, there is something encouraging about seeing three prominent gambles stumble—and nobody say a damn thing.

Blockbuster films with women have slowly but surely permeated the market, and this year has seen some of the most exciting examples. If Terminator 2: Judgment Day’s Sarah Connor, like Ellen Ripley before her, was an anomaly in 1991, when Linda Hamilton set the new (pull-up) bar for what onscreen badassery could look like—in the Furiosa-soaked landscape of 2015, Sarah Connor needs more than a monster truck to make an impression. Of the year’s current Top 10 earners, women occupy lead or co-lead roles in eight of them, and nearly half of those films star women and only women—an achievement that might have seemed impossible even just one year ago.

Maybe it’s just a passing fancy, but in conversation with fellowTimes critic A. O. Scott, Manohla Dargis made one of the most encouraging acknowledgments of this new trend: “We still have a long way to go, baby! That said, we are seeing a rising activism or maybe newfound gutsiness in the industry that echoes the resurgent feminism we’ve seen on college campuses and elsewhere.”

Scott and Dargis didn’t discuss genre in their talk about women in film this summer, but it doesn’t seem like an accident that the films over the last few years (if not decades) to gain attention for their treatment of women characters—from this summer’s genius Mad Max: Fury Road to the indie box office hit Ex-Machina to the upcoming final installment of the multibillion-grossingHunger Games series—are often, if not mostly, members of the science fiction genre.

It was maybe Ursula Le Guin, the legendary science fiction writer, who described the utility of writing sci-fi most clearly, offering, “The future is a safe, sterile laboratory for trying out ideas in, a means of thinking about reality, a method.”

Le Guin, alongside her many literary peers like Octavia Butler or Margaret Atwood, uses the safe space that science fiction offers as a means to expand our understanding of humanity and society—creating worlds that both recall and expand our own sense of the world we live in. Safety isn’t a crutch for great sci-fi—it’s an open door to reimagine the world at hand. What could be potentially dangerous ground for a writer when applied to the practice of everyday life is made safe and productive by the theoretical ground of fiction.

Read more at The Daily Beast