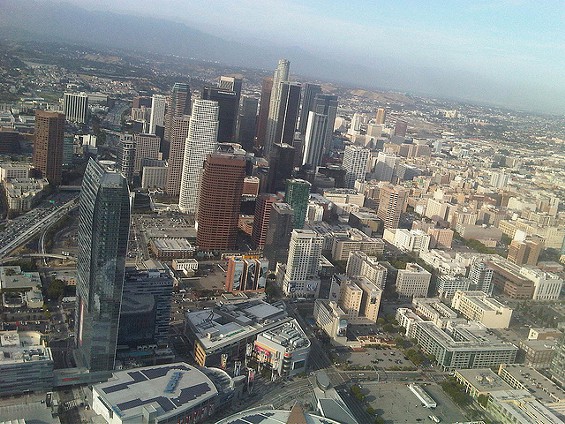 Post-recession America has seen some pretty ugly divides between rich and poor, minorities and whites.

Los Angeles just might be the epicenter of the disparities. It is, after all, a place where hungry immigrants come to make illicit, under-the-table wages while the prices of some estates in the hills above the Westside have been reaching for the $100 million mark.

This week the Measure of America initiative of the Social Science Research Council published a report called A Portrait of California 2014-15. It's not pretty, especially when it comes to some of the findings about our favorite city.

In a town where most of the highly paid entertainment positions go to white men(and yet we still turned around and gave the industry nearly $1.6 billion of our tax dollars), it's probably not surprising to learn that white folks make a median wage that's twice that of L.A.'s largest ethnic group, Latinos, according to the report.

(Yeah, Chris Rock had a point).

What researchers call the East Adams-Exposition Park area saw the lowest median income, about $15,000, recorded in the entire state, according to the report. The Silicon Valley area saw the highest: $73,000.

The heart of this analysis is about the "well being" of Californians via what researchers call their Human Development Index, which is calculated based on measures of health, education and earnings.

South Los Angeles and Watts together scored the lowest on the index for the Golden State.

Comparing that area with some of the highest-income, highest-scoring communities in greater L.A. produced "the largest gap in human development scores," the report found.

" ... The highest neighborhood Index score, in Redondo Beach, Manhattan Beach, and Hermosa Beach Cities, is four times that of the lowest, in South Central LA and Watts," the report reads.

The interesting thing about L.A. is that there are some neighborhoods that have some of the highest scores in the country, and others have some of the lowest scores. What you're seeing in L.A. is a real story of extremes. The inequality goes beyond income.

Sarah Burd-Sharps, co-author of the report:

... It's concerning to uncover that there are in fact five Californias – five starkly different levels of well-being that Californians are experiencing, ranging from the thriving one-percent to the struggling and disenfranchised, who comprise nearly half of the population.

Overall, L.A. ranked sixth out of California's top 10 most-populous cities when it comes to well-being, the researchers found.

Indeed, it's not all bad news. Life in Los Angeles improved during the Great Recession, a rarity, the Measure America folks concluded.

During that time, residents "gained almost a year and a half of life expectancy, and the proportion of the adult population with bachelor’s degrees or higher increased," the report found.

"That's good news," said co-author Lewis. "There's no magic bullet here. But if there is one, we would say education is the key to better outcomes across the board."