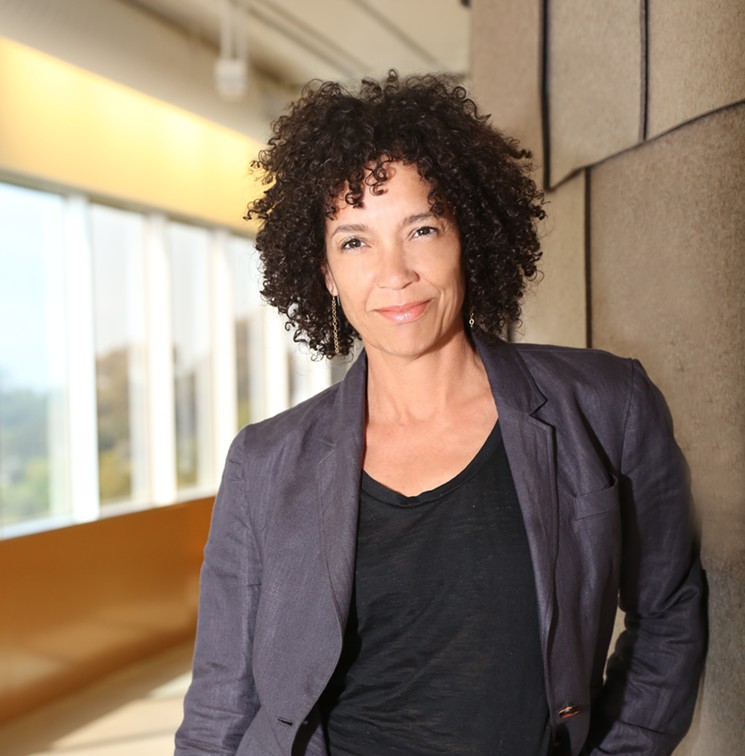 Allain is a shining beacon of hope in studio cinema, but she knows that creating and distributing truly diverse, original film and television comes down to the gatekeepers at those lower levels, the film festivals. As director of the Los Angeles Film Festival, she’s got some words of wisdom on how to find the up-and-coming filmmakers pushing the limits, because this is what she’s been doing her entire career.

April Wolfe: L.A. Film Fest tapped you to make their message of diversity more robust. What does that mean to you? What kind of film are you looking for?

Stephanie Allain: They didn’t tap me. I was already doing it. I’ve been in this space for years. Boyz n the Hood was my first movie. At Film Independent, our mission has always been to support artists who were so diverse. All these people scrambling to make fixes? This is what we already do, and it’s like the world has finally caught up with the movement. Last year, 40 percent of the films at L.A. Film Fest were directed by women. What’s exciting is we’re identifying all these women and directors of color who may not get the shot to be in the spotlight. Of course, the movie has to be good enough to go the next step, but that’s what we’re trying to do with our premieres. In the festival, we have six slots we call “Buzz,” and when I saw Equity [directed by Meera Menon], for instance, I was excited. It’s an alternate universe, because it’s Wall Street all from a female point of view. A world populated by women. The guys are the side pieces to the story. It’s a complete flip of the universe, and I felt like, wow, I have not seen this. These women are just killers from the inside, and that’s very, very … You just feel the power, and that’s fresh.

We also have a doc I love called Political Animal, the story of the four openly lesbian congresswomen, who during the course of the 15 years basically got the marriage laws changed. These women have to stand in the room in front of all these people who say they need to go to therapy to change who we are. It feels very important for the revolution and the incremental change and how we get to where we want to go. We also have Tracktown, from Alexi Pappas, who is an Olympic athlete who’s actually running in the Games. In the movie, she has to take the day off, and we get to see her life. When you make movies and you hire actors portraying runners or boxers, it feels a little off, but Alexi really is it, and it kind of blows your mind how authentic it is, and again, it’s her telling her story.

If L.A. Film Fest has been so successful getting this diverse programming, why haven’t other festivals followed suit until recently?

I give all the credit to our director of programming and creative director, whom I brought in when I demanded we embody the mission in a fiercer way. I’m tired of waiting around for people to make the change. You have to challenge every area of the business, from the studios to the press. You can’t just wait until the Oscars to complain. We get like five or six thousand submissions, and there’s also the thing where we get calls from the agency, and every single one of those calls were people advocating for white men. You could tell in the voice when I ask about women — oh yeah, I do have a woman — and I was like, why didn’t you lead with that? We’re a mainstream festival that’s actually trying to be a diverse festival. It’s L.A. We’re culturally diverse. We’re opening with Lowriders [directed by Ricardo de Montreuil], about East L.A., and we’re closing with Desierto [directed by Jonás Cuarón]. Because L.A. is the most Latino city in the country, and I felt like the festival should really reflect that.

Where do you find these films? What’s the actual process for finding these movies if reps aren’t going to offer them to you?

With Boyz n the Hood, I read that story, I grew up in Inglewood. I knew these kids. It was so powerful to me. At the time, Columbia could make $5 million pictures like Boyz, but if I hadn’t been at the table, that wouldn’t have happened. First eyes matter. So at L.A. Film Fest, we have the most diverse programmers. We’re letting advocates advocate for their own passion. We wanted diversity across age, gender, sex, sexuality, and it wouldn’t just be a few people picking all the films. If you have a tiny swath of programmers who are all the same, that’s what you’re going to get in the end result. People always say, 43 percent women, and 38 percent women of color? How do you find them? It’s a system, a process. You can’t just rely on submissions. You have to call schools, colleges, groups like Film Fatales, and use Facebook to reach out. Most people don’t know I’m looking for this stuff. There’s a lot of outreach that goes on. It’s Roya [Rastegar] and Jennifer [Cochis]. I just direct them to do what our mission is, so they figured out a way to make it a reality and not just a theory. And guess what! Last year, 30 percent of our movies sold out their tickets.

But even if these diverse films are playing in the festivals, how do you get the industry to take notice and follow the lead? What are the next steps?

Last year we sold 20 films [to distributors] out of the festival. I think it’s a combination of fresh new voices and the call and the cry for diversity meeting up with all of these new platforms and distribution companies that are content-hungry. We try to connect the industry to these filmmakers. We ask the filmmakers, What’s your dream? Where do you want your movie to play? We have a festival retreat and invite every feature filmmaker to meet industry people. It’s how we were able to sell Meet the Patels [2014, directed by Geeta and Ravi Patel]. It’s a business of: Do I like this person? Do I want to hang out with them, and are they talented? We invited Helen Huang from Showtime, and she bought In a Perfect World (2015) from Daphne McWilliams. That’s how we make it happen in L.A. Folks are here, and we can make those connections and literally follow up. I call them and ask what they need.

What do you think about the diversity programs that aim to help women and people of color with a leg up in the industry?

We don’t need more diversity programs. We need jobs. The only way people get better is through working, through practice. When these traditional male white directors do one thing, and the studios say, OK, now you can direct this $100 million movie, they’re going to get better, because they’re practicing. But if we don’t get these other filmmakers those jobs, they’re not going to become better. Ten thousand hours means you’re a master. Our idea is to get these filmmakers actual jobs.

What do you think is the responsibility of a film festival to change the system?

We’re programming films we want to puncture you, that change your point of view. That’s what happened with Boyz. After we made it, I got a call from a 50-year-old woman who said, [emotional] I never knew those boys were so real. We changed this woman’s life. This woman probably had a whole different idea of kids in urban areas doing drive-bys, and now she sees them as people. That’s huge. We’re trying to get these other voices out into the conversation. The most important thing is every day in L.A., though, there’s a premiere, a concert, a play. We’re building something really special here, and I just want people to take the time to come out and watch some movies and experience the festival. I’m moderating a conversation with Nate Parker on The Birth of a Nation and how his dream project ended up breaking all the records. How many filmmakers can say that? He found a way to get it done. Ryan Coogler (Creed) is coming down to do a master class in sound. Ava DuVernay (Selma) will be here. The industry comes here to buy movies. I knew it was happening a couple of years ago when HBO bought Nightingale (2014), and I saw David Oyelowo’s face all over. You don’t have to fly to the snow to see a movie. Come to Culver City. It’s fun. And, hey, it’s on the Metro line.

Check this out on laweekly.com