What does it mean to be a Girl Boss? As part of the Diverse Women in Media Forum, a handful of prominent Latina writers and showrunners got together at the NALIP Media Summit to discuss that very question in regards to the television industry. Envisioned as a practical discussion on the realities of being a woman of color in a writer’s room, the conversation was a must watch for those hoping to get pointers as to how to succeed in the industry.

Titled “Girl Boss: A Look into the Writer’s Room” the panel boasted quite the lineup. Moderated by Digital-Reign producer Evette Vargas, attendees got to hear from Davah Avena, currently a writer and story editor on Devious Maids, Charo Toledo, the producer behind East Los High, and Luisa Leschin, a producer on the George Lopez show.

As they put it, all four women wanted to keep it real and dish on what it means to be a woman in what is so often a white male-dominated world. They offered tips, tricks, and survival guides for those wanting to enter the world of television writing. As Leschin put it, if you somehow think that touting your gender and your identity is enough — “Oh, I’m Latina so I’m the Latina expert” — you’re in for a rude awakening. “That almost invariably doesn’t fly.” Thankfully the panel was full of helpful ideas (number 1: Don’t be an asshole) as to how to navigate the television writing world as an up-and-comer.

Find some highlights from the session, including one analogy as to what it means to be a woman in an all-male field that is both hilarious and terrifying.

Luisa: It’s extremely different for women than it is for men. Maybe when you get to a higher position it evens out a little bit but you are entering an intrinsically men’s club. And you have to adjust to that. I always call the room it’s akin to a show Survivor. There is a lot to learn from that show as it pertains to being in a [Writers] room. It’s about alliances, it’s about analyzing the pecking order, it’s about strategy.

Davah: I think it’s also your job to read the room and find out what the environment is. You’re probably going into an environment that’s already pre-existing so you have to really try to pick up on whatever hints there are to figure out what the power dynamics of the room are. You probably can’t change those power dynamics so it’s probably best to figure out what your strategy is going to be. 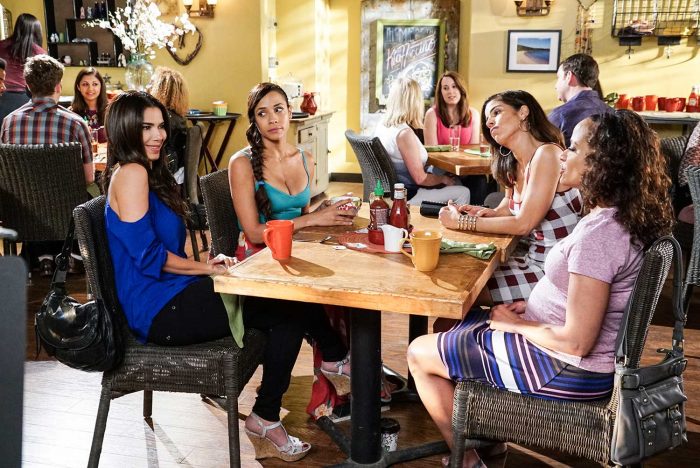 Charo: I’ll also say, there’s a word, and it’s a word that’s hard to say for Latinas because it’s an English word but it’s a competition in Alaska called the Iditarod. And it is in the Alaskan tundra and you go on a sleigh, pulled by dogs for a thousand miles. It is snow. And a hundred degrees below freezing. There are horrible conditions and it’s a man’s world and a woman is not even expected to get to the finish line. Eso no va a funcionar! If you have that in mind, then you’re gonna be great! Because I think that in the Latina market — and I work in both markets — we think we’re so cute and so pretty and guess what? You’re not. It’s an Iditarod, girl! And you know, the only woman who won, the reason she won [the Iditarod] is that she left in the middle of the night in the middle of a blizzard — you know, when the men were by the fire drinking the whiskey. And that’s what I want to inspire today: I want to tell you to be brave.

Luisa: You have to take a holistic approach to being in the writers room and a writing career. Like, if I had a choice between taking a writing class and a psychology class, I’d take the psychology class. (Laughter). I’m not joking.

On Assessing When To Speak Up

Charo: I’m the only woman producing this undisclosed new show and I am with the owner, the head of production. I am with the head of casting, the head of the other show, my right hand guy in the room. And a comment was made about a show and it was a very angry, despicable, horrible comment. This particular producer did not know that I had worked on that show and that I’m incredibly proud of it. So this guy is going off and on and on about this show. And so here we are: we are in the room! I am the only woman. I am at the table, which is very rare for the women to be at the table. But we have two choices in our head: we shut up and say nothing and pretend that we’re in Hawaii in our vacation or do our makeup — an out of body experience — and we just say chill, we’re here for another project and let this guy say ugly things. Or we speak up. So I just said, for now I’m gonna let it go. So the owner of the company comes back to stir it up. Because he’s like we’ll Charo knows because she worked on that show. And so I said, “Well, since YOU brought it up! I want to speak to that.” So I say to the producer — rata de dos patas! rata inmunda! — he turned that color of that bright pink post-it. And basically I went off: you want to talk about race and you want to talk about cable and I said, well that show just got sold to Netflix International and premieres in August; what is your show doing? And he was like, “Oh I guess I shouldn’t say my opinion.” And I told him, “Oh no, mijo go ahead and say your opinion, pero te canto las mañanitas yo también.” In the men’s world, this was a bully and sometimes you have to play by those men’s rules. Push back. And say, espérate no! 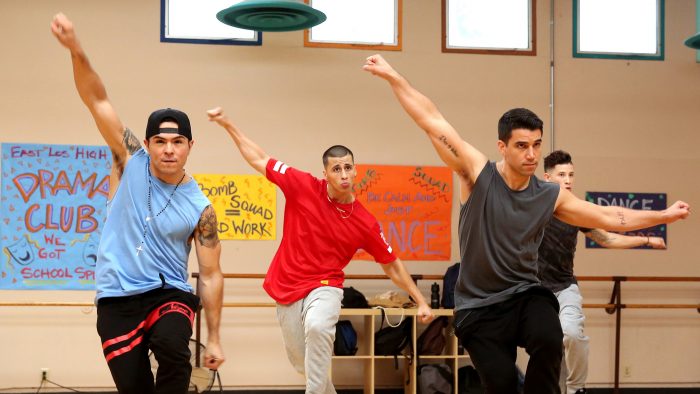 Luisa: One of the things that people don’t talk about is there’s a particular language that is used in a room. And so many baby writers and new writers and haven’t been told it. So they go “I don’t think that’s right!” There are ways of saying like, “How about we try this…?” There’s soft language that you use and again, in that whole psychological thing: you don’t shit on someone’s pitch. And if you want to start developing alliances and if someone above you says something, you say, “That’s such a great idea!” and then try and build on that. You reinforce other people’s pitches and hopefully that’ll give you something back.

Davah: When you say “I don’t like that” invariably the showrunner or someone will look at you and say “Well what’s YOUR idea?”

Evette: That’s another great survival tip. When you find something you don’t like, always praise the positive and pull out what is a kernel and then make it better.

Davah: I once saw Tim Minear, an EP of a lot of shows, once say this thing that comes from Improv: “Yes, and…” You want to be the person who says, “yes and…”

On Staying True To Your Voice

Luisa: When I first got on to George Lopez there were very high energy guys in the room and I couldn’t speak up. And they were cursing — and I curse like a sailor too, but I wasn’t doing it in the room. What started happening was that every time they dropped an F-bomb they would turn to me and say “Sorry.” So I analyzed and I realized, oh you’re making me the grandmother in this room. So I saw that and figured out what I had to do. So I started dropping the biggest F-bombs in the room and shocking those guys so that no one could turn to me and say “Sorry!” 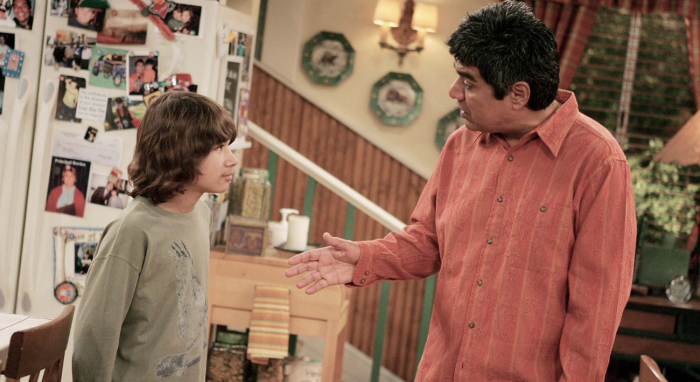 On The Challenges Of Being A Minority

Luisa: One of the reasons it’s so hard to be hired as a woman or as a Latina, it’s that you are the Other in the room. And what that does is it gives whoever is hiring — the showrunner — it gives them an extra thing to think about, it gives them extra work. This doesn’t make them bad people but if I’m a white guy and I hire my buddy who I’ve worked with another project or I went to school with someone who’s just like them. I don’t have to think. I have a shorthand already; there’s a familiarity with this person. If I hire a young woman of color that is foreign to me. And why should I make myself uncomfortable when I have a million things to think about? But that’s changing a lot when women are getting into a lot of higher positions.

Charo: I’ll say this though: 90% of showrunners are white males. We gotta deal in realities but that’s exactly why you women here have to be writing. Because we need that voice and the more people write, the more people do work, the more you can hire your friends, and the more you can spread, and the more original voices and the more it can keep growing. You know, I’m hiring people right now for this show and I’m hiring a lot of people I don’t know. And it’s overwhelming to be honest how many men come at me. The men are very aggressive about getting hired and following up. They really have their game up. They are very aggressive about making themselves indispensable. There’s something to be learnt about that male culture. And not taking things so personally and going after what you want.

Davah: We all want to work with people who we feel comfortable with, so when we’re in a hiring position you better believe I’m going to go to my lady friends and get them in the room. I know they are talented and I know they’re not crazy. When you hire somebody to be on your staff you are committing yourself to being in a room for 10 hours a day for months, Monday through Friday. You can find out that someone is cray-cray and that makes working difficult. I don’t blame old white dudes for hiring their friends because they know who they are are and they know what they’re gonna get. It’s dependent upon us to, as we get higher up in the ranks, to look around us and hire our friends and mentor other women who are coming up. And take a chance on that person who has a great story, has that drive and the ambition.

check this out on Remezcla.com