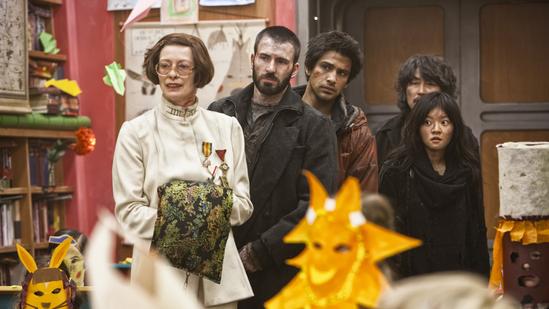 Upon its release, South Korean director Bong Joon-ho’s “Snowpiercer” appeared to have the trappings of a summertime theatrical hit. It had a grabby premise (haves and have-nots battling it out on a train hurtling through a post-apocalyptic landscape). It had wall-to-wall action (sword fights, fistfights, gunfights). It had a major star (Chris Evans of the “Captain America" and "Avengers" franchises) and a compelling, daring actress (Tilda Swinton).

There was just one bump in the road to potential box office glory: “Snowpiercer” opened in only eight theaters. Yes, eight. That's 4,225 fewer than “Transformers" debuted in the very same day.

Well, if you've been frustrated — or perhaps just bewildered — that you haven't yet been able to see one of the most acclaimed films of the summer (Rotten Tomatoes' score: 94%), it’s about to get a whole lot easier. Just two weeks after hitting theaters, “Snowpiercer” will be available as of Friday on VOD, much earlier than a theatrically released film normally would be.

The “Snowpiercer” release pattern has certainly been an unusual one, but the film’s distributor,  Weinstein Co.'s boutique division Radius-TWC, says it’s all been part of a carefully orchestrated strategy aimed at bringing the movie to the widest audience possible. At a time when Hollywood is struggling to work out where movies are heading in the digital age — a subject that director Christopher Nolan tackled this week in a much-discussed Wall Street Journal op-ed piece — many will watch closely to see how that strategy pans out.

Prior to the release of “Snowpiercer,” some speculated that the film’s theatrical release may have been curtailed due to a behind-the-scenes dispute over the cut of the film. But Radius-TWC co-president Tom Quinn says that, from an early point, the company honed in on the idea of giving the film (which remains in its original, director-approved cut) a platform theatrical release paired with an early VOD debut.

“ ‘Snowpiercer’ fits this [strategy] perfectly because it’s in the gap between what constitutes a wide release and a specialized release,” Quinn said. “We expect for it to work theatrically, and we expect it to work on VOD. We hope that they can enhance each other.”

Indeed, “Snowpiercer” has performed well in theaters, albeit in its relatively limited release. The film, which expanded to 250 screens in its second week and will reach 354 screens this weekend, has grossed $2 million and boasted strong per-screen averages. (Internationally, it has earned more than $80 million, the majority of that in South Korea.)

By releasing “Snowpiercer” on VOD ahead of the typical schedule, Radius-TWC risks short-circuiting the movie's theatrical performance. Exhibitors are, understandably, reluctant to keep screens available for films that are playing in people’s living rooms. But Quinn, who ultimately would like to expand "Snowpiercer" to about 600 screens, argues that, in this case, the early VOD release represents a way to reach more potential viewers while buzz around the film is still strong.

“The motto at Radius is ‘a screen is a screen is a screen,' ” Quinn said. “We’re screen-agnostic, and as consumer habits change, film audiences today are becoming screen-promiscuous. Starting Friday, 85 million-plus consumers will have access to 'Snowpiercer' on VOD. The film will be more widely available than every other film on screen this weekend combined. One way or the other, we’re going to find you somewhere.”

For many cinephiles, the shift toward VOD, with many independent releases being simultaneously released in theaters and on iTunes and other on-demand platforms, has been an uncomfortable one. While it unquestionably makes many films more widely available than they would otherwise be, watching a movie on a TV, laptop, tablet or phone is hardly the same as seeing it in a theater. Some argue that releasing films this way diminishes film as an art form and results in movies being, as Nolan wrote in his essay, "thrown in with other endeavors under the reductive term 'content.' "

For his part, though, Quinn believes that, given the rapid shifts we're seeing in technology and entertainment consumption, experiments like the “Snowpiercer” release are exactly what is needed to safeguard the future of movies as we've known them.

“I believe theatrical and VOD can coexist,” Quinn said. “My favorite restaurant started offering home delivery, but I still go eat there. We absolutely believe in the theatrical value of our movies. But there has to be more nuance and more innovation [in film distribution] in the service of making the industry more competitive. The more competitive it is, the better the content will be. You have to tailor a release strategy to each movie. It’s not one-size-fits-all.” (Indeed, Radius-TWC took a very different tack last year with its Oscar-winning documentary “20 Feet From Stardom,” keeping that film in theaters for months.)

Film distribution has always been as much art as science. We'll never know how "Snowpiercer" might have fared if it had been released on hundreds or even thousands of screens right out of the gate; it's certainly more offbeat and philosophical than your typical summer blockbuster, so it's quite possible that it could have become lost in the shuffle.

But however successful the "Snowpiercer" experiment ultimately proves, it has already shown us one thing: When it comes to Hollywood’s digital future, the train has left the station.

Check this out at Los Angeles Times.