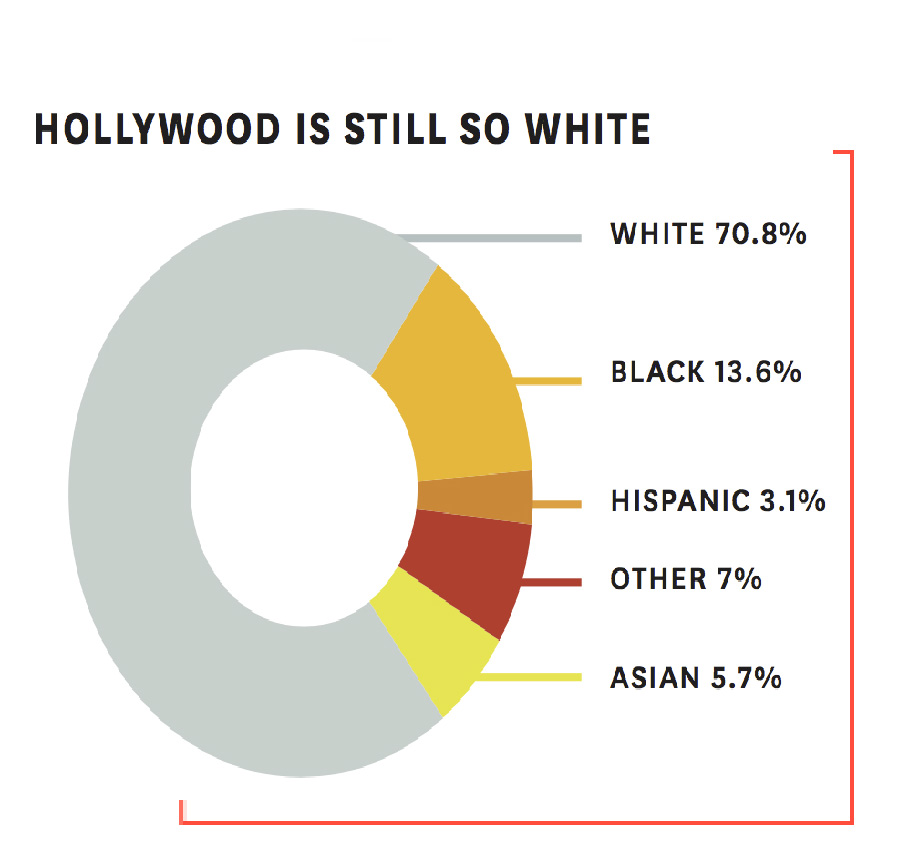 The lack of diversity in the industry is a common theme that has resonated with vast audiences through hashtags, political activism movements, and various platforms. However, the question still begs to be asked, is the needle moving forward on diversity and inclusion? The recently published study conducted over the span of nine years by USC Annenberg revealed staggering results regarding the lack of diversity in the industry; however it comes as no surprise to our Latinx community. For decades, minorities have taken the back seat when it comes to seeing diverse leading characters, directors, writers and producers in Hollywood. The Media, Diversity, and Social Change Initiative examined the 100-highest-grossing-films at the box office, then dissected the demographic of every speaking or named character in each film; and also included the roles behind the scenes. The results from the research show, that not much has changed in recent years and it is clear that we must create opportunities for our community to ensure progress.

According to the Annenberg report, over the nine-year study, and a collection of 900 box-office hits, the percentage of prevalent female speaking roles increased by a mere 1.5%. At the beginning of the study in 2007, the percentage of prevalent speaking roles for women was at 29.9%. In 2016, the percentage measured was 31.4%. Even less so of diverse background. If this isn’t shocking enough, when documenting the ratio of male to female actors, Annenberg divulged that there were 2.3 males for every single female character.

When it comes to the roles behind the camera, such as, directing, and composing, Dr. Stacy L. Smith found that out of 1,006 directors, 41 were women. In percentage form, that would mean only 4.1% of directors were women. The numbers for composers weren’t any better. In a total of 998 composers, only 14 were women, 1.4%.

Visually seeing these graphs and statistics is astounding. It is evident that there is a vast need for female representation in front and behind the camera. NALIP’s Diverse Women in Media Initiative targets this group of underrepresented individuals and works toward bringing diverse women together to connect, network and empower one another.

Centering on the Latino demographic, Dr. Smith noted that in 2016, 54 of the 100 box-office-hits depicted 0 Latino characters. The overall percentage of Latino characters for the final year of the study was an astonishing 3.1%. You’re most likely wondering whether that number decreased or increased at all throughout the entire span of the study? The answer is an appalling no. Since 2007, the percentage has remained stagnant for Latinos, Blacks, and Asians.

This sad truth is the main reason why NALIP felt compelled to step in and advocate, and promote Latino and diverse content creators. Through our programs and events (the Latino Lens Incubators, NALIP Media Summit, Latino Media Fest, etc.). NALIP is given the ability to advance talented voices and projects that might not have been given the necessary platform to grow and expand.

The LGBTQ community is no stranger to opposition. For years the LGBT population have practically faced an epidemic of invisibility in film. According to Dr. Smith’s 2016 statistics, out of 4,544 speaking characters: 36 were gay, 9 lesbian, 6 bisexual, and 0 were transgender.

Due to the Annenberg findings, it’s safe to surmise that a separation does exist in Hollywood, and is in serious need of attention. These numbers aren’t only baffling, but they’re extremely disconcerting. As individuals, we seek to connect with our onscreen counterparts; to learn, laugh, and cry through every scenario they find themselves in. The push for inclusion and diversity is not any necessary, it is essential. NALIP has taken the proactive approach in examining the data and self reflecting on how we can take these issues head on when we talk about advocating for youth, the LGTBQ community, women and the overall spectrum of Latinos. We have strategized and implemented standards into our programs so that we continue to develop, nurture and support the next generation of Latino content creators. By tracking, curating, incubating and innovating, we are now seeing the positive results as we have supported projects, concepts, short films that have sold to major networks and studios and others who are being developed into features and series. That is the change that we have activated. When we see proactivity in programs like our development and incubation programs such as the Latino Lens: Short Narrative Incubator, where 67% of the directors coming out of the incubator were women. When designing our Diverse Women in Media Initiative, we felt it was necessary to broaden the program by including all women of diverse backgrounds and ethnicities and professions in the industry in order to move forward, collectively. When pushing the boundaries of the stories being written by Latinos about Latinos, we encourage NALIP members to go beyond the general tropes of the tired scope of what others feel Latinos are. In the concepts being submitted to our programs we are seeing Latinos in space, doctors, business driven professionals, heroes and heroines, Latinos in science fiction genres, military, etc. As a community we must hold each other accountable to take the stories about us to the next level. We invite sponsors, partners, allies, sister organizations, NALIP members, creatives, executives and all in this industry who have created with us to now see that we are it. We Are Inclusion. We must collaborate, connect, support and advocate for one another in order to continue to push that needle forward.