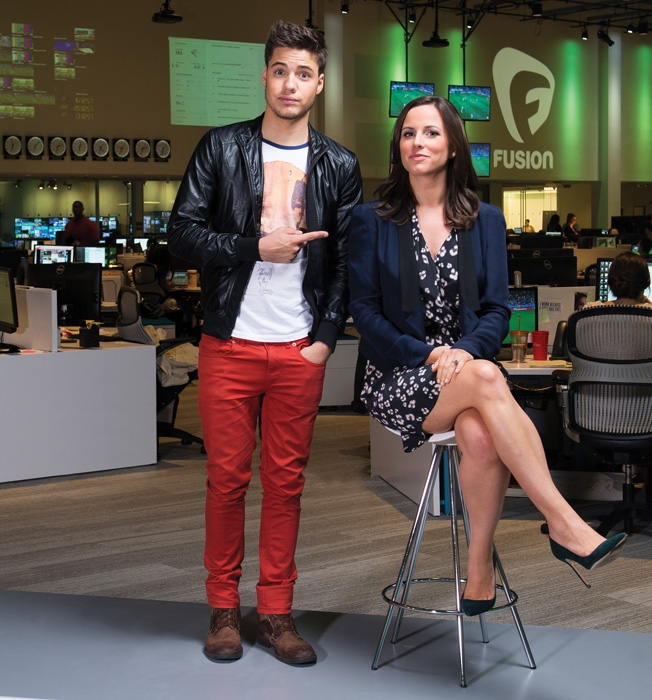 Alicia Menendez is a digital and mobile junkie. The 30-year-old host of Alicia Menendez Tonight, a weeknight talk program about sex, money and power on Univision and ABC’s joint-venture news network Fusion, is practically fused to her mobile device, even when she’s watching TV. “I just want them in tandem. One augments the other,” she says one evening after filming a segment at the Univision/Fusion Newsport headquarters in Doral, Fla., just outside of Miami.

The jobs of these women illustrate the contrasting ways in which Univision and Telemundo are reaching into the digital space. (Both companies have fought for decades to secure Hispanic TV audiences—a fight Univision has dominated.) Where Univision is looking to grow new digital businesses like Fusion and online destination Flama, Telemundo chooses to mine its existing strong suit—telenovelas—for digital iterations. They want the same thing—to attract young and active Hispanic millennials—but are going about it in much different ways.

Growing Up Hispanic
There’s a good reason the companies are aggressively building out digitally. According to the latest Census report, 52 million Hispanics live in the U.S., with nearly two out of three (65 percent) between 18 and 34. The population is expected to grow to 132.8 million by 2050 and much of that growth will be fueled by immigrant children and grandchildren.

While these second- and third-generation Hispanics still understand the nuances of their forebears’ culture, many are English-first, notes Mario García, founder of global media consulting firm García Media. A 2012 Pew study indicates that English is the predominant language in 34 percent of Hispanic households, up from 9 percent in 2011, while Spanish is on the decline. “I have children of my own who were born here,” García says. “Their likes and dislikes have less to do with Hispanics than they have to do with millennials of their own age of all ethnic groups.”

There’s one common element among almost all young Latinos: an appetite to live digitally—not unlike Menendez. A Pew report, Latinos and Digital Technology, finds that Hispanic millennials are 66 percent more likely to use a mobile device than their non-Hispanic friends. And it is well-known that they are the most active group on social media.

“Digital is the very first place to start when you are talking about millennials, particularly Hispanic millennials, where their day and their life is extremely about commenting and posting. The device becomes a huge conduit in their hands,” says Marla Skiko, evp, digital innovation at Starcom MediaVest Multicultural.

The fact that young Hispanics are indoctrinated into mainstream culture makes it easier for brands to reach them using a general-market approach, unlike older generations, says Charles Neugebauer, vp, director of account management of Wing, the Hispanic marketing arm of Grey Global Group. Wing has discovered that Hispanics greatly influence non-Hispanics when they live in close proximity to each other, implying a messaging rub-off on the broader millennial market. And because so many millennial Hispanics live in multigenerational households, marketers also hope they will spread their messages at home.

The Digital Univision
We are inside the soundproofed New York studios of Flama, the Univision Communications/Bedrocket site that covers stories the Spanish network may never touch, using emerging talent from the digital world.

One such performer, who goes by the name D-Stroy, is faking a cough while waving his arms wildly. “Today we’re going to be talking about artists who might have inspired you to smoke, and gangsters who were so high they didn’t realize they were watching Magic Mike in 3-D,” he blurts. The YouTube star completes his slightly NSFW monologue about marijuana, freely ad-libbing. When he’s done, there’s a brief moment of silence before everyone bursts into laughter.

“All right, let’s try it again,” a producer interjects. D-Stroy sticks a little closer to the script on take two.

Personalities like D-Stroy and singer Becky G populate Flama, another of Univision’s new digital offshoots. Though it’s too soon to tell if the kids are watching, first time advertisers like Trojan have signed on.

“It’s about reaching this next generation of Hispanic millennials who are increasingly consuming content online, are really confident in the digital space and engaging with this short-form content that is snackable and sharable. It’s a different consumer behavior than we’ve seen in the past,” says Steven Benanav, Flama gm.

Univision’s approach seems to be to flood the zone with new digital iterations. “Digital has to be part of the DNA of the entire company,” explains Kevin Conroy, president of digital and enterprise development for the parent company. “It’s no longer adequate for digital to be a division of something or a team that works over on the side.”

In that spirit, digital content studio La Fabrica UCI, which launched six months ago, will produce both editorial and native content. Its first venture is Variety Latino, a Spanish-language portal for mass-market entertainment news. Stories about Game of Thrones fandom appear alongside listicles featuring Hispanic stars. Going forward, it will weave in English-language content, mostly from sister venture Fusion. Next up for La Fabrica is Alma Extrema, an extreme sports site set to launch in August that targets men 18-34.

Even methods of storytelling are being affected across all the company’s platforms. Under the watchful eye of chief digital officer Daniel Eilemberg, Fusion’s recent documentary Pimp City, which explored the sex trade, was presented not only in a linear TV format, but also an enhanced, chaptered digital experience involving text, graphics and embedded bonus clips. ABC News president James Goldston applauds Fusion’s efforts in experimentation, adding that the network explores topics ABC can’t necessarily delve into. (Another possible motivator for the network: Hispanic millennials are expected to play a crucial role in the 2016 presidential election.)

Some say Univision’s loyal stable of older viewers threatens to be forgotten, even as social media gets folded into the TV network’s newscasts.

William Valdés, the on-air social media host for Univision’s Despierta América, makes sure to include segments aimed at older viewers, including a recent segment on how to use Twitter. Afterwards, his mom ended up joining the social network and following him. “I was surprised when she went from a BlackBerry to an iPhone—now she’s on Facebook and Twitter!” he says.