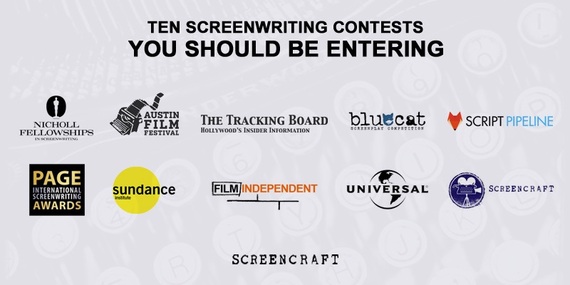 In the last near-decade, the significance of screenwriting contests in the eyes of the film industry has grown. Hollywood has been using them more and more often to connect with new writers. There are more people trying to be screenwriters than ever, forcing the studios to thicken those walls, making it more and more difficult for new screenwriters to break through. Contests have truly become one of the most widely utilized filtering systems. They essentially do the work for the studios, production companies, agencies, and management companies, as far as weeding through the countless scripts to find the diamonds in the rough.

So for screenwriters, contests have become the ultimate way to penetrate those thick studio walls and surpass those Catch 22 scenarios. Studio writers like Evan Daugherty have seen their dreams come true through the success of winning contests. In 2008, he was discovered through the Script Pipeline contest, attaining representation and eventually getting on the Black List that year for his script Shrapnel, which eventually became the film Killing Season. He parlayed that success and momentum to his $3.2 million spec script Snow White and the Huntsman. There have been many, many such success stories of late.

However, since the 1990s, there has been a steady growth of screenwriting contests, competitions, and fellowships -- to the point where there seems to be an endless stream of them. How do you find the ones that are worthwhile to enter?

When you're considering your options, you should always ask yourself this simple question -- WHAT CAN I GET OUT OF THIS CONTEST?

Are you more interested in the big cash awards or do you want more access to the film and television industry?

Cash is always nice, but it’s not the goal. (If you want to get rich quick, screenwriting is definitely not the best route). Access to the film and television industry opens doors that you can take advantage of throughout your whole screenwriting career. Access can give you representation, multiple phone calls, and meetings. It's the access you want -- the ability to utilize relationships to push your screenwriting career forward.

Below is a breakdown of the ten screenplay contests, competitions, and fellowships that you should be entering, with the sole goal of getting the most out of each and every one. Of course, we included our own genre-specific screenwriting competitions.

If there's a granddaddy of them all, this is clearly the one. It's run by the Academy of Motion Picture Arts and Sciences -- the Oscars -- and is the most prestigious option available to you.

Each year, the Academy Nicholl screenwriting competition awards up to five $35,000 fellowships to amateur screenwriters. Fellowship winners are invited to participate in awards week ceremonies and seminars and expected to complete at least one original feature film screenplay during the Fellowship year.

If you're looking for access, this is one of the best competitions out there.

The Tracking Board is an excellent tool for screenwriters -- a real-time news service providing writers up-to-date analysis on trends in the spec market and beyond. Their Launch Pad competitions -- pilots, features, and manuscripts -- have helped dozens of writers elevate their professional careers, sell their scripts and even get staffed on television shows.

In the last two years, 105 writers have been signed to representation from the features contest alone -- 114 in the last three years for the pilot contest.

They are also partnered directly with one of the hottest management companies in Hollywood -- Benderspink. The company’s clients have made every major industry best of lists including the Hit List, Black List, and Young & Hungry List year-after-year, and include clients such as Evan Daugherty (Snow White and the Huntsman, Dennis Dugan (Grown Ups), David Robert Mitchell (It Follows), Christopher Roach (Non-Stop), Victoria Aveyard (Red Queen Series), and several more. The company has also produced a number of projects, including every installment of The Hangover franchise, as well as the Horrible Bosses franchise. They’ve also produced The Ring, We’re the Millers, A History of Violence, The Butterfly Effect, and dozens more.

So if you're looking to get high profile representation, look no further than these competitions.

The only major studio-based screenwriting fellowship available to feature writers.

The Emerging Writers Fellowship is a program at Universal Pictures designed to identify and cultivate new and unique voices with a passion for storytelling. Emerging writers who are chosen to participate in the program will work exclusively with the studio over the course of a year to hone their skills. During this program, fellows will be given the opportunity to work on current Universal projects as well as pitch original story ideas. In addition to working on writing assignments, the fellows will receive industry exposure by: participating in filmmaking workshops and studio seminars, receiving mentoring from established filmmakers, networking with top literary agents and managers, meeting with production development executives, and attending screenings and premieres.

Fellows admitted into the program will be hired under a writing service agreement and must be committed to working full-time for one year. Additionally, Universal Pictures has the option to extend a fellows' contract for a second year. The writer will receive the salary of $69,499 for that first year (likely the same for the second). And yes, you'll need to physically live in Los Angeles during that time.

Overall, this program is basically offering writers a chance to learn through the system, much like screenwriters did back in the old days of Hollywood. It's an intense fellowship for those serious in taking on a full-time screenwriting career.

Note: They do not include writing partners in this program.

ScreenCraft's screenwriting contests are dedicated to discovering talented screenwriters and connecting them with producers, agents, and managers. Our contests uniquely tailor the prize package and jury for each contest (eliminating potential genre bias) by specializing in screenplay competitions by genre.

ScreenCraft's contests have quickly become the fastest growing in the industry, connecting writers with top industry screenwriters, development executives, and representation. Each genre contest has specific judges that have written, developed, or represented the best films and television series of those genres.

Any entrants -- whether they win or not -- that receive a script coverage rating of 130 or more during the reading and judging process are also shared with ScreenCraft's exclusive list of industry professionals.

This competition has been going strong for over two decades. They pride themselves on their personal touch. All entrants receive FREE "Reader Comments" which are a brief, overall summary of their notes. As an added bonus, for Second Rounders (the top 10-15% in each category) and above, entrants receive further comments from 2-3 readers. They also send both postal mail and e-mail notifications to ensure everyone knows their placement in the competition.

Semifinalists and Finalists have the opportunity to meet with several agents, managers, and executives, and participate in the festival's Script Reading Workshops where their scripts are read aloud and workshopped in a personalized setting. Semifinalists and Finalists' loglines and contact information are also included in the annual Producer's Book, distributed to all AFF panelists as well as over 400 agents, managers, producers, and other industry professionals.

The Sundance Film Festival is clearly the premiere event of the year for filmmakers worldwide. For screenwriters, this can often prove to be an amazing launching pad into both indie cinema and Hollywood. This competition will allow screenwriters to network and meet some industry professionals, but will also serve as perhaps the best possible education they could receive in screenwriting and storytelling through film overall.

The Screenwriters Lab is a five-day writer's workshop that gives independent screenwriters the opportunity to work intensively on their feature film scripts with the support of established writers in an environment that encourages innovation and creative risk-taking. Through one-on-one story sessions with Creative Advisors, Fellows engage in an artistically rigorous process that offers them indispensable lessons in craft, as well as the means to do the deep exploration needed to fully realize their material. They accept 12 project each year.

Some of Hollywood's greatest talents have gone through the various Sundance Labs, including famous auteurs like Quentin Tarantino and Paul Thomas Anderson.

If the screenplay that you plan on entering has won a competition before, BlueCat is not for you. However, it does offer some excellent connections for those that have never won any. The writer of the Hugh Jackman and Jake Gyllenhaal film Prisoners was discovered through this contest years ago.

The unique aspect of BlueCat is that every entry receives written analysis as well -- a service that normally costs additional fees for other contests, competitions, and fellowships. While the analysis may not be as expansive as those provided by others, it's free.

This competition was established in the fall of 2003 by an alliance of Hollywood producers, agents, and development executives. It's widely recognized within the industry as one of the most important sources for new screenwriting.

Past winning writers have signed with top literary representatives, optioned and sold their scripts, landed paid writing assignments, and many now have movies and television shows in production, on the air, and in theaters. This competition allows you to submit under certain genres as well.

Past winners have written films like the recent Maggie, The Judge, and have joined the writing staff of shows like The Walking Dead, Bates Hotel, Sleep Hollow, etc.

This contest has been going on for over fourteen years and continues a long tradition of discovering up-and-coming talent and connecting them with top producers, agencies, and managers across studio and independent markets.

Thus far they tally over $5 million in screenplays and TV pilots sold from competition finalists and "Recommend" writers since 2003.

Much like the Sundance Screenwriters Lab, this lab focuses on honing the skills of the writer and preparing them for the film industry and how to best tell their cinematic stories. It also connects them with industry veterans as well, so there is certainly an excellent networking opportunity.

It's an intensive four-week workshop that meets two to three evenings a week in Los Angeles every September. The lab is designed to facilitate each writer's unique voice through the development of a single feature project. Through personalized feedback from experienced industry professionals and other writers in the program, Screenwriting Fellows will gain the tools to revise and refine their scripts for production.

The Screenwriting Lab also helps to further the careers of its Fellows by introducing them to film industry veterans who can offer guidance on both the craft and business of screenwriting. Each Screenwriting Fellow will be paired with a Creative Advisor, with whom they'll work one-on-one and in Lab sessions to further develop their project over the course of the program. A variety of guest speakers may screen and discuss their own films, or offer insights into their career trajectories, and a final retreat offers further opportunity for individualized feedback and discussion with additional established filmmakers and producers.

You do obviously have to live in Los Angeles to take part -- or live there for at least four weeks.

This fellowship provides mentorship for up to eight diverse, emerging storytellers. Following a one-week intensive of master classes, participants are immersed in eight months of mentoring by HBO creative executives as each participant develops a script suitable for HBO or Cinemax. Submissions can be original 1/2 hour comedy pilot or 1 hour drama pilot, one act play or full length play, or a feature film screenplay.

This obviously affords writers the chance to work directly with the powerhouse that is HBO right now. Amazing networking opportunities and a chance to get an on-the-job education in screenwriting directly from the source.

This fellowship is currently closed, but keep an eye on it later in the year as they re-open entries.

Before you enter any of these contests, be sure to read ScreenCraft's 7 Things to Do Before You Submit Your Screenplay to Anyone.

Check this out on huffingtonpost.com