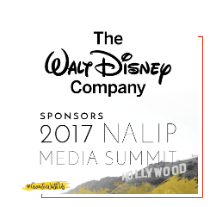 NALIP is happy to announce that The Walt Disney Company has come on board as a sponsor for our 2017 NALIP Media Summit!

Disney has been a long-time NALIP supporter and sponsor, and screened ‘Elena of Avalor’ at the last year’s Media Summit. The screening was a huge success among attendees who applauded Disney for portraying the first Latina princess. As one of the leading studios across the globe, Disney has always shown a commitment to creating inclusive films and changing the industry’s landscape to fit its audience. We are thrilled to collaborate with Disney once again!

For more information on The Walt Disney Company, make sure to visit www.thewaltdisneycompany.com.