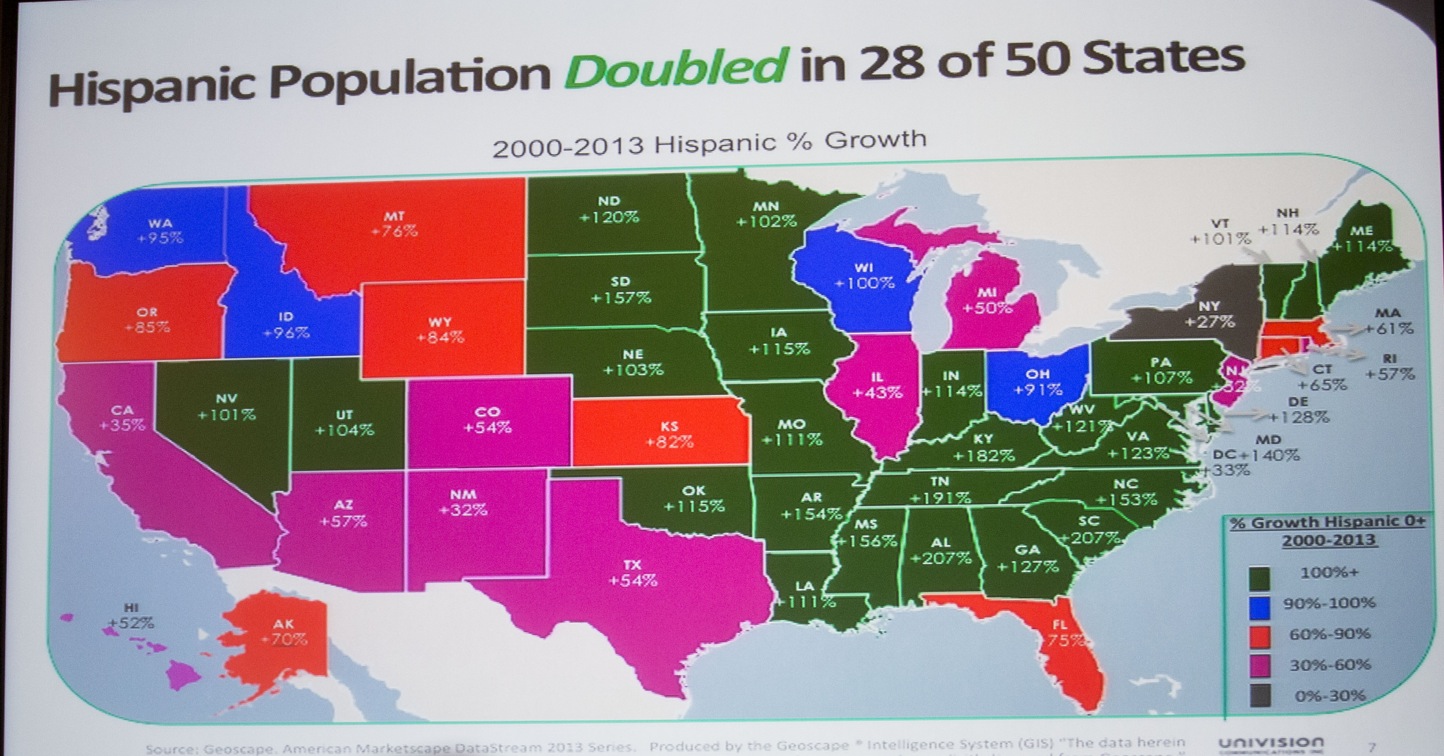 The growing Hispanic population in the United States is set to shape businesses and the country’s economy in a big way over the next 50 years, according to Chiqui Cartagena, vice president of marketing for Univision.

Calling it a “Latino baby boom,” Cartagena, a seasoned journalist and media expert  who has worked with businesses for 20 years, spoke Monday on the impact natural born and immigrant Hispanics have had on shaping business and marketing strategies for companies looking for future growth.

Cartagena was the lunch time keynote speaker on the kickoff day of Reynolds Week at Arizona State University’s Cronkite School of Journalism and Mass Communication. Her audience included journalists and professors taking part in the Reynolds Week program, as well as professors participating in the Scripps-Howard Entrepreneurship Institute, which is also being held this week at the Cronkite School.

“When companies like McDonald’s, Coke and Pepsi tell me they are focusing more on being multicultural, they are changing,” she said following her presentation. “Twenty years ago, they weren’t saying that. Now they get it.”
What do you think?

The U.S. Hispanic population is projected to increase for the next fifty years and expected to make up a larger part of the country’s population. By 2060, 30.6 percent of the American population will be Hispanic, while the non-Hispanic white population will make up 42.6 percent, according to projections.

Cartagena, author of the books Latino Boom! and Latino Boom II, says the boom is not confined to states Latinos have traditionally settled in, like Arizona, New Mexico, California and Texas, but has become a national phenomenon. Across the country, the Hispanic population doubled in 28 states over the last 13 years.

Following job opportunities, new patterns of population growth have developed as well, helping to support different economies that might have otherwise experienced a population decrease if not for the boom.

“We’re seeing a new pattern of Latino migration to the Midwest,” Cartagena said.

The growth is also fueled by a shift in the makeup of the Hispanic population, according to Cartagena. More and more Latinos are being born in the United States instead of emigrating from other countries, which has traditionally formed the makeup of the group.

With the growth, Latinos represent more purchasing power and are becoming the “backbone” of the economy in the United States while more and more enter the middle and upper classes, Cartagena said. One in six consumers in the country are already Hispanic and, since 2000, the percent of the Latino population making over $100,000 a year has doubled from 7 to 13 percent.

Much of Cartagena’s time in the media industry has been spent convincing companies looking globally to “look in their own backyards” for opportunity.

And the data backs that idea up – if Hispanics in the United States made up their own country, it would have a higher per capita income than any BRIC (Brazil, Russia, India and China) country worldwide, according Cartagena’s research.

That purchasing power means a lot of potential dollars across a number of industries. For instance, Hispanics already spend $90.7 billion on groceries consumed at home, impacting agriculture and the food industries. In the housing market, they are expected to represent half of all new home buyers by 2020.

Culturally, the population is on stable ground to support its place in the economy, now and in the future. Cartagena said research shows the Hispanic population is more concerned politically about education than it is about immigration reform, which is an issue often tied to its communities.
Ninety-four percent of Hispanic parents expect their children to go to college and 1 in 5 currently attends technical or vocational school. Not only does that mean the population will be more qualified to enter a variety of fields, but it will also spend more in support of schools and universities.
Altogether, Cartagena argued, the impact that Hispanics have economically can no longer be ignored. Still, problems with cultural perceptions, representations and portrayals, especially in the media, surround the community
But, as she has seen in the past, that change is certainly coming along as well, though more still needs to be done.

“The Hispanic community is really a business imperative for companies today,” she said.

Check this out at BusinessJournalism.org.