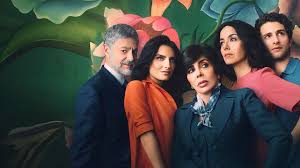 Frenzied fans have turned Netflix’s Spanish-language melodrama La casa de las flores into a social media phenomenon in a matter of days. Director Manolo Caro’s series starring Mexican diva Verónica Castro and centered on a secretive, affluent family in Mexico City debuted in early August. Since then, an avalanche of memes, tweets, and Instagram posts have proven that audiences are obsessed with the show.

Binge-watchers are incessantly quoting Paulina de la Mora (Cecilia Suarez) and her hilariously slow line readings that stretch out words by pronouncing them one syllable at a time. There is even a #PaulinaDeLaMoraChallenge in which people replicate the curious way she speaks and her most memorable lines like when she forgot to cancel the mariachi or when she sends “El Cacas” her regards.

Other recurrent topics that have captivated the collective Latino consciousness are Chuy the sock puppet, the shocking season finale, and the progressively minded story that challenges the status quo of Mexican society. Caro himself has joined the discussion but mostly to address the public’s demand for a second season which, to be fair, is a great burden to have as a creator. Interestingly, the show has also sparked discussions about subtitles and dubbing with some English speakers also enjoying the Almodóvar-esque drama.