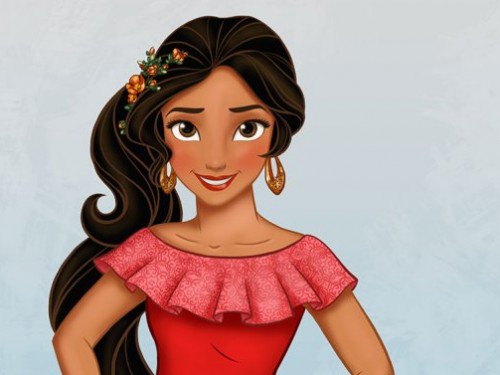 Some pretty spectacular news coming out of Disney HQ today. Disney announced that their newest princess will be hispanic and that her name will be . . . wait for it . . . Elena. As a hispanic woman named Elena I FULLY endorse this addition to the princess roster. Brava Disney!

To be honest, I can’t believe that Disney hasn’t welcomed a Latina princess sooner and I just surfaced from a pretty heavy Google deep dive where I was looking for any hint of a Latina Disney princess of yore and nope, Elena is the first.

Here’s what we know about her so far: her official name is Elena of Avalor, she’s 16 years old, and she’s spent DECADES trapped inside of an amulet that plays a very important role on the current Disney Junior show Sofia the First (Sofia btw is NOT Latina though many people have asked that very question). It sounds like in a special episode of Sofia the First (which is a MASSIVE hit for Disney Junior, btw) Elena will be freed from the amulet, and then spun off into her own Disney Junior show.

Elena will be coming to Disney Junior next year, and it sounds like she’s going to be doing a lot of pretty awesome fighting — she’s in a heavy battle with an evil sorceress named Shuriki. Other characters on Elena of Avalor will include her little sister Princess Isabel, her grandfather Tito, her grandmother Cici and two besites — Mateo, a wizard in training, and Skylar who is some sort of flying creature.Disney says the whole story takes place in “an enchanted fairytale kingdom inspired by diverse Latin cultures and folklore,” and they’re calling Elena a “bold, caring, funny and clever ascendant to the throne in the fairytale kingdom of Avalor.”

Oh and the voice of Elena will be played by Dominican-American actress Aimee Carrero who is right now on ABC Family’s Young & Hungry.

It goes without saying that bringing more diversity to the princess lineup is awesome, particularly when it’s a show geared at such a young audience, many of whom still don’t see themselves or their cultures represented enough on television. Little kids have had Nickelodeon’s Dora, of Dora the Explorer, as a Latina character to relate to but adding Elena is an rad move that shows how seriously Disney is taking their Latino audience. As they should be!

Check this out at HelloGiggles.com