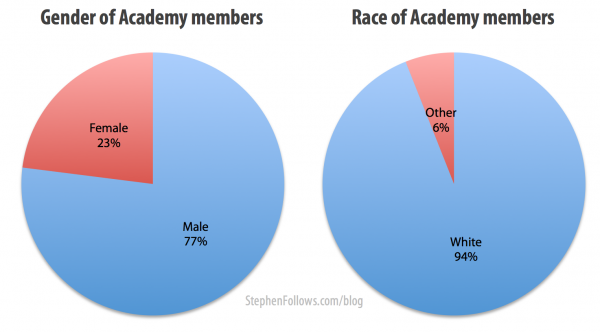 Announced Thursday, bright and early were the 2015 Oscar nominations, and along with it the discovery that this will be the whitest Oscars in years. Proof that further supports that Hollywood's approach to diversity is more than lacking.

A previous report from the Los Angeles Times revealed Oscar voters are 94% white, 77% male and only 14% under the age of 50 from a total average of 5,765 voters.

This years nominations are absurdly lacking diversity, and that can't be said for the talent available this year with "Selma" expected to have garnered many academy nods in various categories, including a Best Director nomination for Ava DuVernay. This years recognized academy talent reflects a completely white selection within the both Best Actor/Actress and Supporting Actor/Actress categories, that include Reese Witherspoon and Benedict Cumberbatch.

It's time the Academy of Motion Picture Arts and Sciences diversified to reflect an industry that doesn't lack diversity within it's talent, even while it appears to be an industry that fails to recognize it.

Leave a comment below, with your message to the Academy.