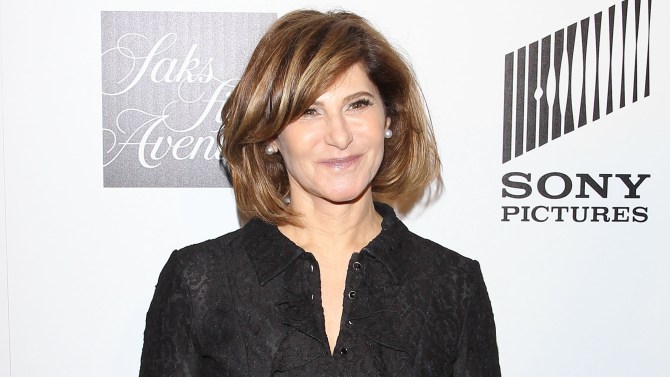 Amy Pascal is stepping down as co-chairman of Sony Pictures Entertainment and chairman of its motion picture group.

She will remain at the studio as part of a new producing deal.  Pascal will stay in place through May, at which point she will take the reins at her new venture.

No decision has been made on her replacement, according to an individual with knowledge of the situation, but there is a deep bench on the Sony lot. Among her possible replacements from within the Sony ranks are former Fox studio chief Tom Rothman, who now runs TriStar Pictures, Sony Pictures Entertainment Motion Picture Group President Doug Belgrad and Columbia Pictures Production President Michael De Luca.

Pascal’s contract expires in March. She is one of the longest-serving Hollywood studio chiefs and has been praised for her role in shepherding a number of commercial and critical hits such as “Spider-Man,” “The Social Network,” “Zero Dark Thirty” and “21 Jump Street” to the bigscreen.

The end of her tenure has been rocky, however, as Pascal’s departure comes after a devastating hack of her emails left her vulnerable and compromised her relationships with top talent. Pascal has been forced to apologize to A-list actors, producers and stars after her unvarnished thoughts on projects involving the likes of Angelina Jolie, Leonardo DiCaprio and Bradley Cooper were made public.

A series of racially insensitive remarks she made with producer Scott Rudin about President Barack Obama’s favorite movies — the two joked that the president was a fan of “The Butler,” “12 Years a Slave” and other films about African-American topics — led to meetings with civil rights leaders such as Al Sharpton and Jesse Jackson, along with vows to make amends. Pascal, a liberal voice on issues such as same sex marriage and a vocal supporter of Obama,insisted that the remarks do not reflect her true beliefs or character, but her remarks drew stinging rebukes from the likes of Shonda Rhimes and Ava DuVernay.

The hack was launched by North Korea in retaliation for “The Interview,” a lewd comedy that centered on an assassination attempt on the country’s leader, Kim Jong-un.

Sony is providing the funding for Pascal’s production company and will retain worldwide rights to the films she makes. It will be based on the Sony lot and the commitment is for four years.

“I have spent almost my entire professional life at Sony Pictures and I am energized to be starting this new chapter based at the company I call home,” said Pascal in a statement.  “I have always wanted to be a producer.”

Pascal had already been concerned that the ax might fall on her head prior to the the Sony hack. Although Sony has fielded hits such as “22 Jump Street” and “Captain Phillips,” the studio is still reeling from the months of layoffs enacted as a response to activist investor Daniel Loeb’s criticism of its management and its decision to greenlight flops such as “White House Down” and “After Earth.”