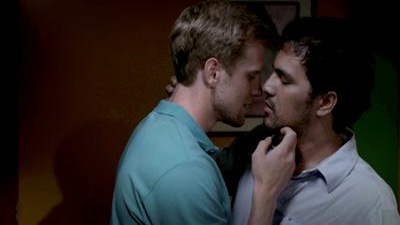 SEBASTIAN is a Peruvian feature film that was shot in Peru and Los Angeles and it's going to have its U.S premiere in the U.S dramatic features category at OUTFEST LA 2015, making it the only Latino story in the main competition category at the festival.

Sebastian's comfortable Los Angeles existence is thrown out of orbit when news of his mother's deteriorating health sends him flying back to his hometown in Peru. Once there, his previous life as a closeted son seamlessly starts again. When his handsome husband Josh shows up unannounced - to the shock and disdain of his mother and her community - Sebastian must confront two vastly different cultures, both of which have profoundly informed his identity.
This film also marks the film debut of Eva Ayllon. Eva is a composer and singer, she's one of Peru's foremost Afro-Peruvian musicians, and one of the country's most enduring living legends. She holds the record for most nominations without a win with six for the Latin Grammy Award for Best Folk Album.
Previously screened:
Busan International Film Festival - South Korea (World Premiere).
Guadalajara International Film Festival - Mexico (Latin American Premiere).
Outfest LA (U.S Premiere)

SEBASTIAN is the only Latino film in the US competition at OUTFEST this year and is having its LA premiere next week on Saturday, July 11th.