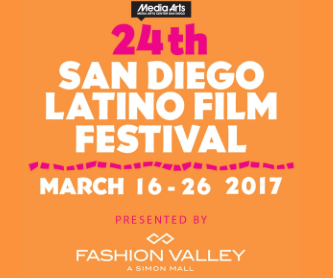 The 24th Annual San Diego Latino Film Festival (SDLFF) started this week and will run until Sunday. The festival features over 160 films from various countries including Chile, Mexico and Brazil. It celebrates the diversity within the Latino culture by hosting films and professionals from all over Latin America and the U.S.

Opening day kicked off with 18 films, including ‘Ruta Madre,’ a road film directed by Agustin Castaneda. Co-writer of ‘Ruta Madre,’ Joey Molina said, “This film festival was very important to us, because the movie is a regional story (San Diego-Baja). This is as close to a homecoming as you can get for a film.”

‘Ruta Madre,’ starring Carmen Salinas, comedian Paul Rodriguez, Paulina Gaitan and Angélica María, follows the story of a heartbroken young American singer who reluctantly leaves his home in San Diego, California to embark on an epic road trip through Baja with his uncle in order to reconnect with his Mexican roots and find himself.

Audiences at the festival were also the first to see ‘Lowriders,’ starring San Diego actor, David Fernandez Jr., Eva Longoria and legendary actor/comedian, Paul Rodriguez. The film focuses on the dynamics of a fractured family in East Los Angeles and centers on the world of customizing classic cars.

“It was the backdrop to the lowrider community so, we do get a chance to dive into that world or that sub culture but it really focuses on the father and son story and I think that is the important piece that we really don’t see a lot especially in mainstream films,” said Fernandez, Jr.

The longest-running Latino film festival on the West Coast also brought in a ton of stars from all over. ‘Rebelde’ fans are able to see Alfonso Herrera tonight as he discusses his latest film ‘El Elegido.’ ‘One Day at a Time’ cast and crew will also be speaking on Saturday. Then on Sunday, legendary activist Dolores Huerta will be a special guest at the festival, promoting ‘Dolores,’ a film based on her life.

“For 24 years, our goal has been to help build bridges and to encourage a better understanding amongst all of us," said festival founder Ethan Van Thillo. "No matter where we originally came from; all of us living in the U.S. have similar universal stories of love, family, hardships, spirituality, immigration and more."

The San Diego Latino Film Festival was established 24 years ago as a student film festival focusing on works by Latinos and/or about the Latino Experience. It has since grown into one of the larger and well-respected Latino film festivals in the country. For more information on the festival, click here.