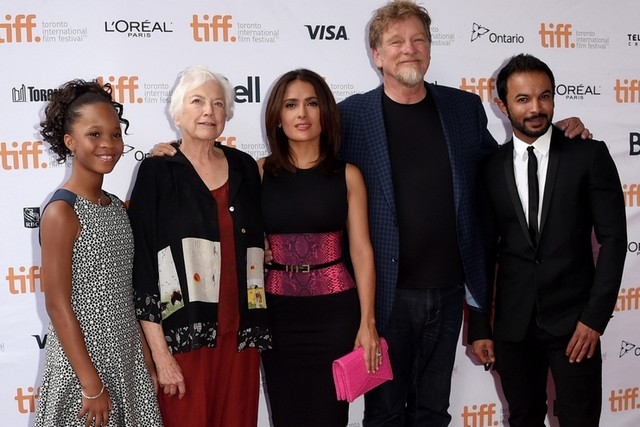 Kahlil Gibran’s The Prophet debuted at the Toronto International Film Festival to critical acclaim, with the audience also clapping along to the songs.

The world premiere screening on Saturday was attended by the film’s cast and crew, including its producer Salma Hayek, who also voices one of the characters, the actress Quvenzhané Wallis and a selection of the film’s nine directors, including Roger Allers (The Lion King) and Mohammed Saeed Harib, the Emirati animator who created the popular Freej cartoons.

“I never expected that the audience would start clapping 20 minutes into the film – that was amazing,” said an ecstatic Hayek after the premiere. “That was the first time with the audience and it was more than I could expect. I was very moved and surprised and I just managed not to cry, by a little bit.”

The film, inspired by Gibran’s poetry, is a delightful mix of animation styles from some of the world’s top animators.

Allers is the director-in-chief who has written and directed the connecting narrative sections that tell the story of a mischievous young girl, Almitra (Wallis), who is forever getting into trouble, much to the displeasure of her mother, the beautiful housekeeper Kamila (Hayek).

One day, Almitra follows her mother to work, which leads to a chance encounter with a political prisoner called Mustafa (Liam Neeson), who tells her stories that were inspired by Gibran’s text.

Each time a new tale begins, the screen is transformed into an animation reflecting that section of the book. Each animator brought their own unique style to proceedings.

The directors are Tomm Moore (The Secret of Kells), whose segment is titled On Love; Michal Socha (The Pillars of the Earth), On Freedom; Joan Gratz (Lost and Found, Kubla Khan), On Work; Nina Paley (Sita Sings the Blues), On Children; Joann Sfar (The Rabbi’s Cat and Gainsbourg: A Heroic Life), On Marriage; Bill Plympton (Your Face, Guard Dog, Push Comes to Shove), On Eating and Drinking; Harib (Freej), On Good and Evil; and Paul and Gaëtan Brizzi (Tarzan, The Hunchback of Notre Dame), On Death.

The reaction to the film has been overwhelming.

The crowd began clapping during the song that accompanies Nina Paley’s animation On Children and didn’t stop until after the post-screening Q&A.

“What a phenomenal film, thank you Salma Hayek for making this happen,” said Mehreen Khawaja.

Even those with some reservations were ultimately impressed. One person wrote: “The Prophet is a flawed, unique, heartfelt and occasionally stunning patchwork of Gibran’s poems.”

Allers’ animation, which links the sections from the other directors, is aimed at younger audiences, but adults also reacted with delight when the poetry was recited.

Middle East audiences will not have to wait too long to see the film for themselves – it will be screened at the closing night gala of the Ajyal Youth Film Festival in Doha, which runs from December 1 to 6.

Hayek is already looking forward to the event. “We are trying to come to the Middle East first to the Doha Film Festival and we are making all kinds of plans now.”

Check this out at TheNational.