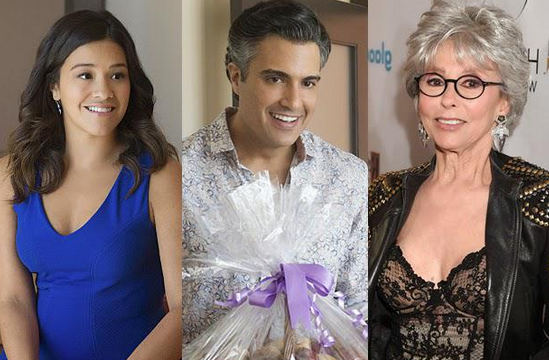 Legendary actress Rita Moreno has joined the cast as Jane's paternal grandmother, or rather Glam-ma, as she'll be called, Access Hollywood has confirmed.

Gina Tweeted that she was feeling under the weather on Wednesday, but the news helped to lift her spirits.

"Sick in bed trying absolutely every remedy to get better because guess who is playing my new grandma on #JaneTheVirgin!? Legend #RitaMoreno," Gina Tweeted.

Gina won the Golden Globe earlier this month for Best Actress in a TV Series, Musical or Comedy. Rita – one of only 12 EGOT (Emmy, Grammy, Oscar, Tony) winners in history – was nominated in that very same category back in 1983 for "9 to 5."

Over the course of her illustrious career, Rita won a Golden Globe and Oscar in 1962 for Best Supporting Actress in "West Side Story," two Emmys – one in 1977 for "The Muppet Show and another in 1978 for "The Rockford Files" – and a Grammy in 1973 for a children's recording she did with Bill Cosby on the album "The Electric Company."