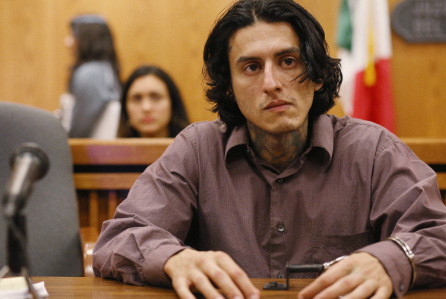 From the moment he stepped up to audition for John Ridley’s anthology series American Crime, for a role that on paper was familiar to him, Richard Cabral hoped to bring new light to a Latino archetype often misaligned in the media. As Hector Tontz, the gang member implicated in a vicious, drug-related murder, Cabral did just that, and in the process earned a Supporting Actor in a Limited Series or Movie Emmy nomination.

Hector is one of the few characters at the end of Season 1 to get a happy ending. He’s a free man, he has a new job, and the future looks bright for him and his young family. It was something no one would have seen coming, and not just because the cast wasn’t aware of their characters’ full arcs at the outset.

“Getting the (pilot) script I was like, “OK, this is a Latino figure. He has some dealings with the street and that was it,” Cabral says. “It was kind of vague, but I felt that reading into the character it already had a sense of a three-dimensional side. It was enough for me to play with.”

When John Ridley screened American Crime for the Shabazz Center and Homeboy Industries—which was instrumental in helping Cabral leave his real-life gang past behind—there were concerns that Hector was just going to be the typical drug-dealing gang banger. “John just kept on reassuring me, week in and week out, ‘Just trust in me Richard,’ ” Cabral says. “After towards the middle of the season I was pretty sold.”

Cabral says the tough topics tackled in American Crime—how a murder affects all the different people of a community—made him and his costars bond deeply on set. “We were in a bubble in Austin,” he says. “Every single one of us went through a dark place. But it was OK because when you looked to the left and you looked to the right we all knew that we were on an individual road but at the same time kind of going through it together. There was a real sense of camaraderie, a strong bond, but not just an acting bond. It was spiritual.”

It’s been a little jarring for Cabral after coming off an experience like that, getting an Emmy nom, and now having strangers know more about him and his gritty past. “This is yesterday—a buddy of mine has a Mexican restaurant,” Cabral says. “He was like, ‘Hey, Richard, I’m looking at you on the news and I’m proud. We’re going to name a burrito after you.’ It’s nothing like changing or helping a person find themselves, but who would’ve thought that I would make it to a point in my life where somebody would be naming a damn burrito after me.”

Cabral is hoping his newfound notoriety will help him do more. “It’s opened a whole different door because it’s not just about being an actor no more,” he says. “It’s about being a voice in the community. There’s so many ways to be a voice and that’s what I’m figuring out. Being an artist, being an actor, it’s about telling stories that could heal, that could open up discussion that could make the community better. There are many (Latino) stories that need to be told and haven’t been told right. If I could help be that voice then that’s what I’m going to do, because this is a reality for me.”

Cabral is one of several cast members returning for Season 2, as a completely different character in a new storyline. “First of all, I’m a hero,” he says. “Me looking like a criminal gang member is going to be thrown out the window. I’m not implicated in the crime. I’m helping trying to figure things out. I’m on the good side.”

Cabral returns to the American Crime set in October. Season 2 will air next year.

To see him in a scene from Season 1, click here.