New research released today from the Geena Davis Institute on Gender and Media shows that we have a long way to go in our depictions of girls and women onscreen in family-friendly movies. It also showed that countries around the world must do a better job of employing women because, when they do, we see more women and girls onscreen.

Geena Davis, who is pushing so hard for gender equity in films, said the following about the new research:

“Women are seriously under-represented across nearly all sectors of society around the globe, not just on-screen, but for the most part we’re simply not aware of the extent. And media images exert a powerful influence in creating and perpetuating our unconscious biases. However, media images can also have a very positive impact on our perceptions. In the time it takes to make a movie, we can change what the future looks like. There are woefully few women CEOs in the world, but there can be lots of them in films. How do we encourage a lot more girls to pursue science, technology and engineering careers? By casting droves of women in STEM, politics, law, and other professions today in movies.” 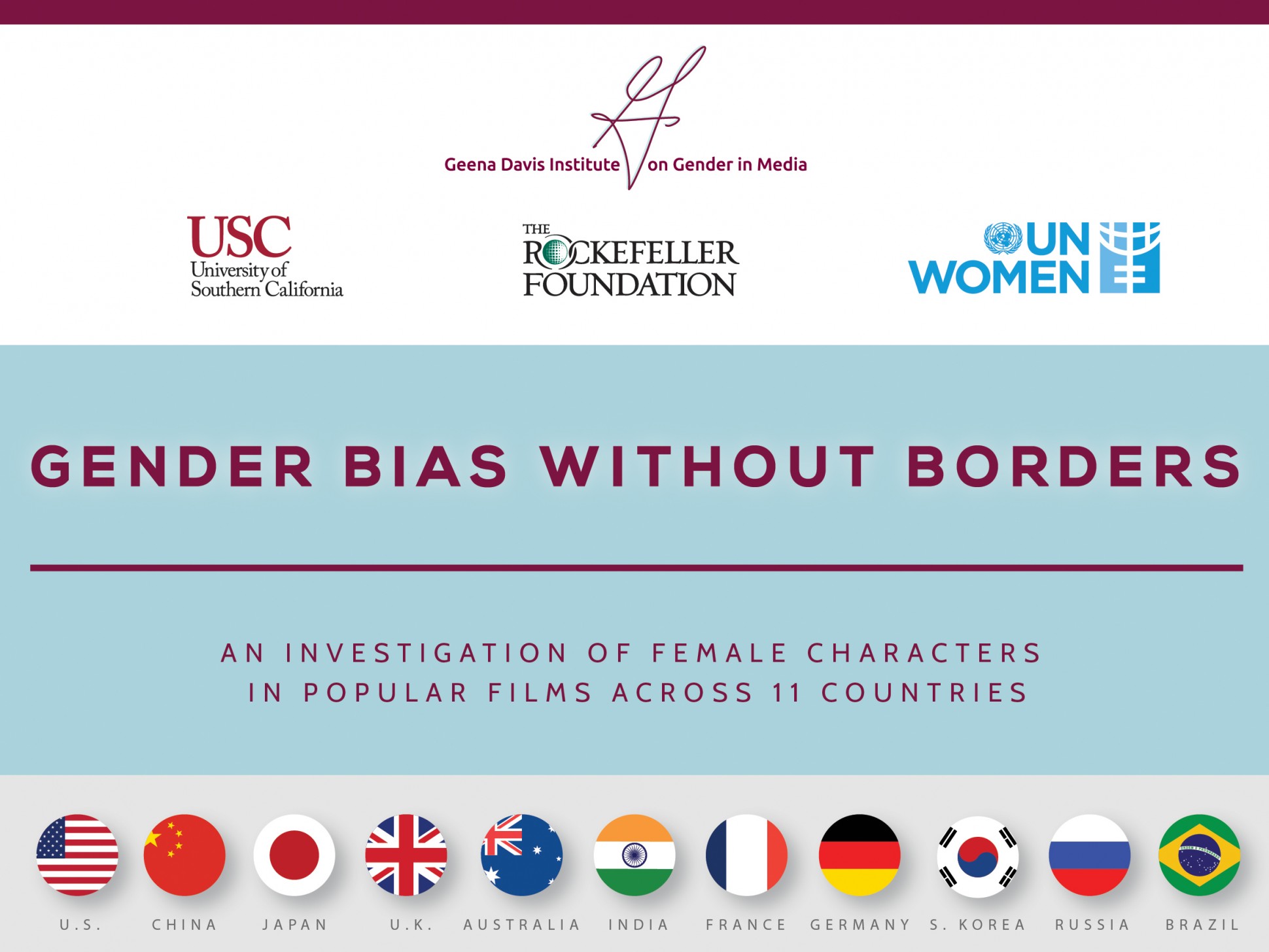 In their previous research, Dr. Stacy L. Smith, Marc Choueiti, & Dr. Katherine Pieper at the USC Annenberg School of Communications, looked at G, PG and PG-13 rated movies that were released in the US. For this study, done by the same researchers, they looked to see if the gender disparity that we see in the US is also the same around the world. (The data set includes a content analysis of gender roles in popular films across the ten most profitable territories internationally: Australia, Brazil, China, France, Germany, India, Japan, Russia, South Korea, and the United Kingdom. They also analyzed US/UK co-productions and used US films as a point of reference for comparison.) Films had to be theatrically released between January 1, 2010 and May 1, 2013.

Here are some of the findings:

Girls and women are missing. There are 2.24 male characters for every female character. Only 30.9% of the speaking characters are female. China, Germany, Korea, and the UK have the highest depictions of female characters. Korea has the highest percentage of female leads or co-leads. UK films that are not co-productions with the US have a much better rate of gender parity. As the study notes, “as U.S. studio money comes in, females are pushed out.”

Action adventure had the fewest females.

There is a crisis in women directors across the globe. Out of 1,452 filmmakers, 20.5% were women, but just 7% were directors. 19.5% of the writers were women, as were 22.7% of the producers. France, Japan, Russia, the US, and Korea had zero women directors working on these films. The best employers were the UK, with 27.3% women directors and 58.8% women writers.

You are just as likely to be sexualized in a film if you are 13 or if you are 39.

All across the globe, women are underrepresented as part of the work force, while male characters are seen more often in positions of power. For example: Women are seen as just 10% of the politicians, 5% of judges, 0% of partners in law firms, and 13.9% of business executives. The only female politician that was powerful in the whole data set was Margaret Thatcher in The Iron Lady. And forget seeing women in STEM jobs. When characters held those positions, 88.4% were men and 11.6% were women. This calculates into a gender ratio of 7.6 STEM males to every 1 STEM female.

“A call to change is crucial. Girls and women comprise 50% of the world’s population, but represent far less of the international film populace. Asking filmmakers to create more roles for girls and women is not asking for the impossible. Instead, adding girls and women to stories means conceptualizing a fictional world that looks startlingly like the one we already inhabit.

Second, a call to be creative is necessary. Female characters can and should easily fill an equivalent share of the workforce and clout positions across industries simply through the imaginations of their creators. Conceiving of female CEOs, politicians, lawyers, judges, and doctors is the work of a creative-writing moment, but could have important and lasting consequences for the next generation.

Despite these limitations [of the survey sample size], the present study offers a unique glance at the gendered nature of film content worldwide. The opportunity to usher in a new reality is close at hand, however. Equipping and catalyzing storytellers to counter decades of stereotypical media portrayals is one place to start. After all, filmmakers make more than just movies, they make choices. Those choices could be for balance, for less sexualization, and for more powerful female roles. The choice could be for gender equality.”

Check this out at Forbes.com