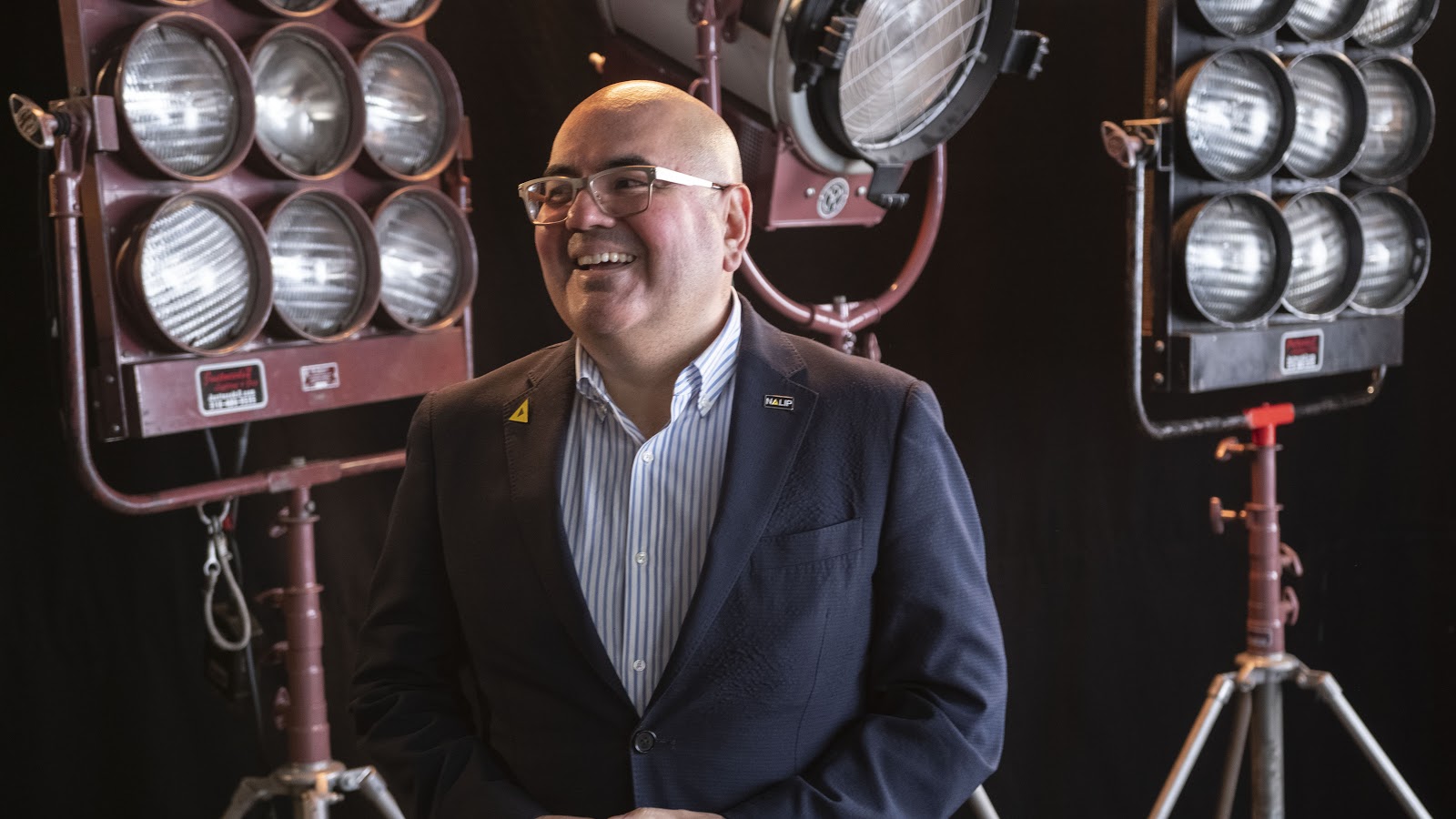 NALIP's Executive Director Ben Lopez will be at this year's Baja California International Film Festival, presenting a masterclass: "Conoce el ecosistema de Hollywood!" This will be Ben Lopez's third time participating in the festival's programming, and NALIP is excited to continue promoting our mission on a global scale.

Read more about the gala here! 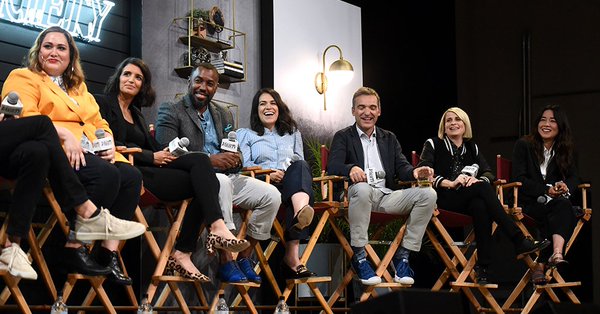 The WGA writers boost and representing Los Angeles on screen were two of the topics most passionately discussed at the comedy panel for Variety‘s “A Night in the Writers’ Room” event.

“Vida” creator Tanya Saracho said that she felt it was her duty to participate in the staffing boost and reach to aspiring, often unrepresented writers on social media. She received a mountain of scripts in response, but delightedly revealed that she found someone she wants to hire for Season 3.

Later, the conversation moved to representation on screen, with Saracho saying that the industry is making “small steps,” but that it’s still too early to “pat ourselves on the back.” 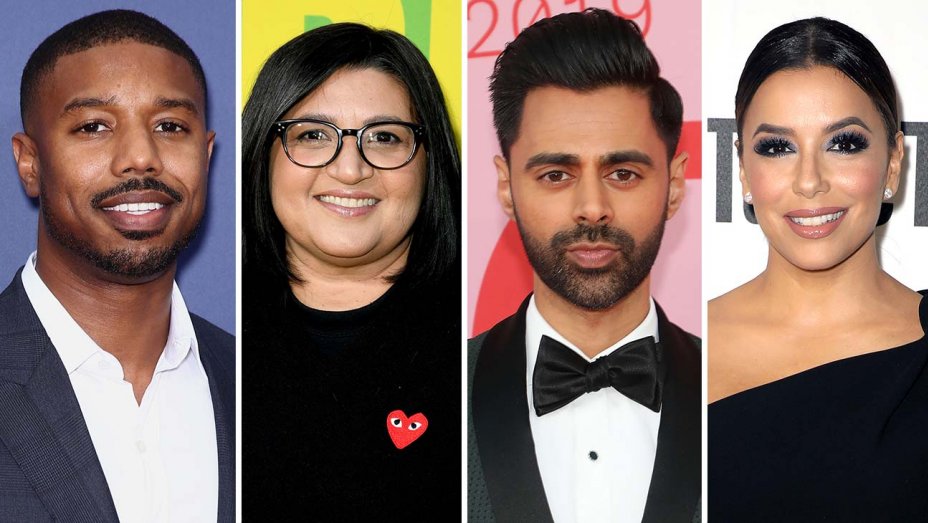 The third annual convening of the ideas confab, geared toward people of color, is set to take place June 24 in Ojai, California.

The team behind Warner Bros.' upcoming legal drama Just Mercy will be featured on a panel about storytelling and social change at the third annual CAA Amplify summit.

Michael B. Jordan, Jamie Foxx, director/co-writer Destin Daniel Cretton, Ford Foundation president Darren Walker and Equal Justice Initiative executive director Bryan Stevenson will address an invitation-only guest list of artists and executives at the confab that focuses on people of color. In keeping with this year's theme of narrative influence on changing hearts, minds and policies, other speakers include Always Be My Maybe helmer and former Fresh Off the Boat showrunner Nahnatchka Khan, Hasan Minhaj, and Eva Longoria.

Watch 'The Chambermaid' in Theaters 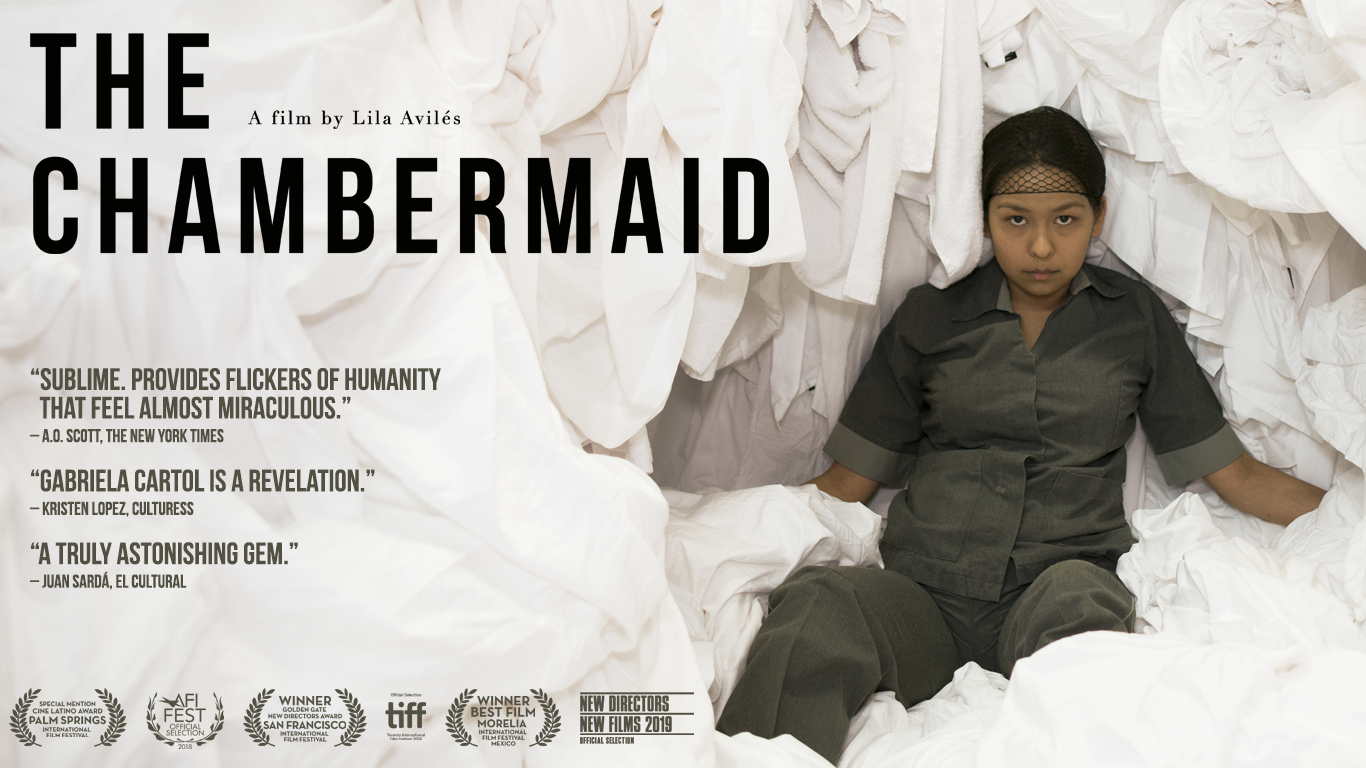 A poignant and delicate class portrait, The Chambermaid follows Eve — played by the wonderful Gabriela Cartol (I Dream in Another Language) — a young chambermaid working in one of the most luxurious hotels in Mexico City, an exclusive glass tower inhabited by wealthy guests whose lives she imagines by their belongings left behind and their absences. Long, laborious shifts prevent Eve from caring for her child as she helps guests with their own children, but she believes she can better her situation after she’s promoted to work at executive-level suites, for which she accepts a grueling schedule. In keeping with her desire to improve her lot, she simultaneously enrolls in the hotel’s adult education program.
Set entirely in this alienating environment, with extended scenes taking place in the guest rooms, hallways, and cleaning facilities, this minimalist yet sumptuous movie brings to the fore Eve’s hopes, dreams, and desires. As with Alfonso Cuarón’s ROMA, set in the same city, The Chambermaid salutes the invisible women caretakers who are the hard-working backbone of society.
“Approaching the subject with a documentary sense of realism, director Lila Avilés keeps a light touch… For much of its running time, The Chambermaid operates as a subtle study of inequality, but what emerges before our eyes is a character study free of pretense… [The film] offers a sometimes funny and playful look into the inner life of Eve; nuanced and natural, it has a quiet and modest power as it comments on the ironies of contemporary cities like Mexico City and their growing economic divide.”
– John Fink, The Film Stage
Watch the trailer here!
When: Wednesday, June 26 - Tuesday, July 9
Where: Film Forum, New York
Tickets: https://filmforum.org/film/the-chambermaid
Facebook Event 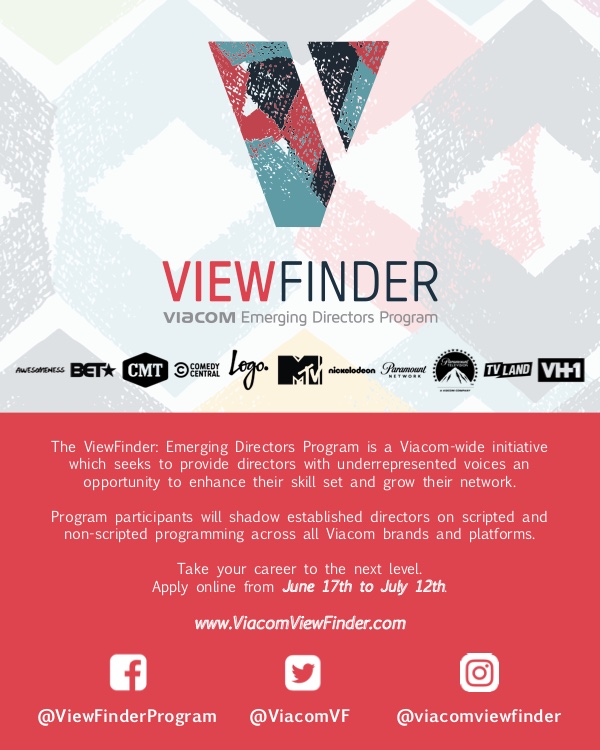 We are excited to announce that Viacom’s ViewFinder: Emerging TV Directors Program is currently accepting submissions for the 2019-2020 cycle!

Viacom’s ViewFinder: Emerging TV Directors Program's mission is to find the next wave of talented and underrepresented visual storytellers. Program participants will shadow established directors on scripted and non-scripted programming across all Viacom brands and platforms. We believe that your organization has the talent that we’re looking for.

In an effort to reach your organization’s talent pool, we ask that you please share the attached graphic with your peers and members via job boards, newsletters, and social media networks.

Please feel free to reach out to our team at [email protected] if you have any questions or would like to further discuss the ViewFinder Program. 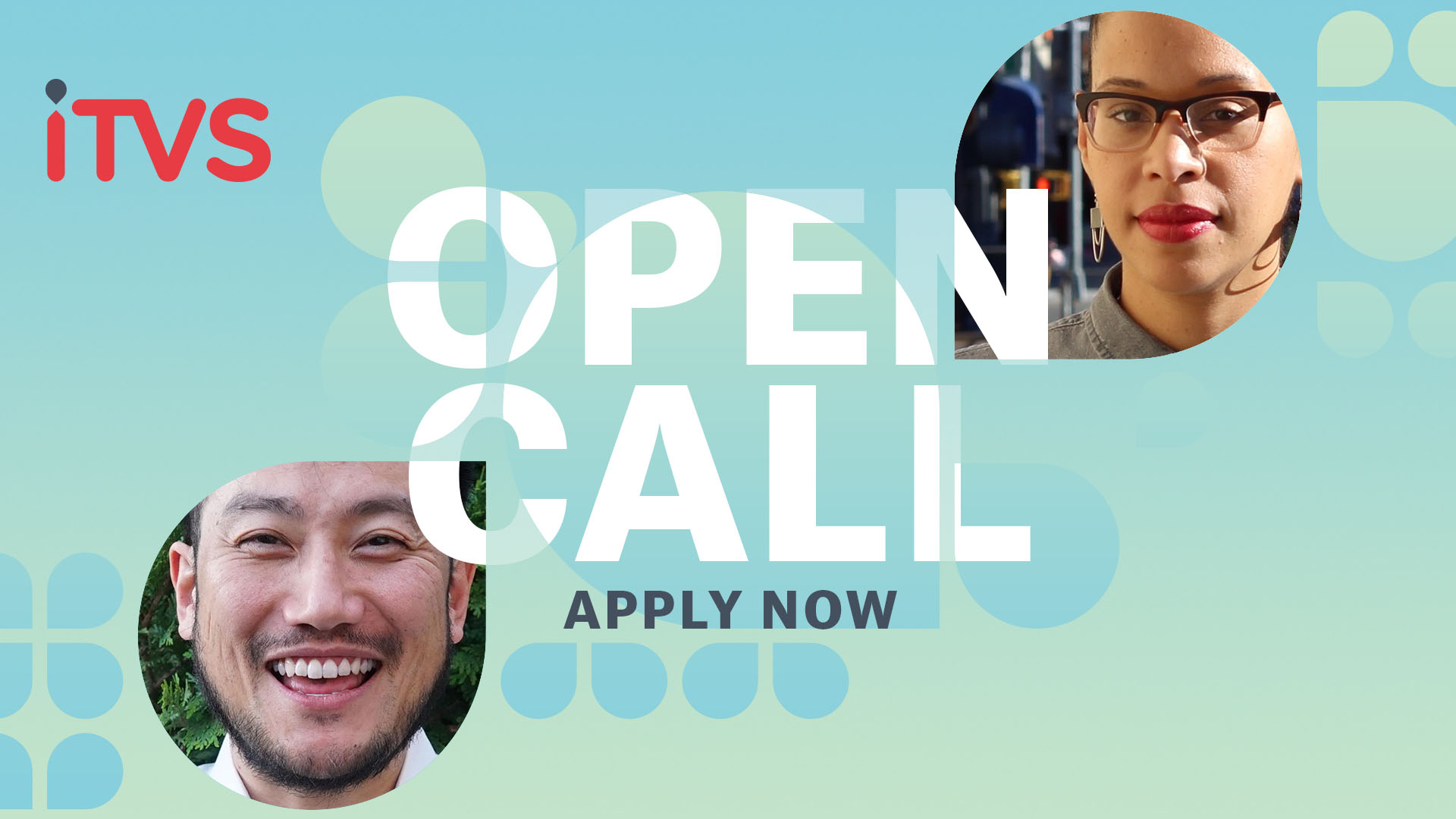 Get co-production funding and support to complete your documentary for broadcast on public television—whether you’re an emerging filmmaker or a veteran producer.

The deadline for receiving all Open Call application materials is Friday, July 26th at 11:59 pm Pacific.

To apply to Open Call and for more information please visit: itvs.org/funding/open-call

Open Call funding is only available to independent producers who are citizens or legal residents of the U.S. and its' external territories.

Join this live chat and online screening and chat to learn what ITVS is looking for and hear from filmmakers whose projects were recently green-lit by ITVS. The panelists will show selects from their works-in-progress and discuss their editing process. Presented by Jannette Bivona, Initiatives and Field Relations Manager Guest Speakers: Eugene Yi (Free Chol Soo Lee) and Beth Aala and Beth Levison (Made in Boise).

Hear from ITVS about basic budgeting: from guidelines to building a realistic budget that will get your film finished on time and pay everyone an equitable salary. Presented by David Eisenberg, Sr. Director of Production. 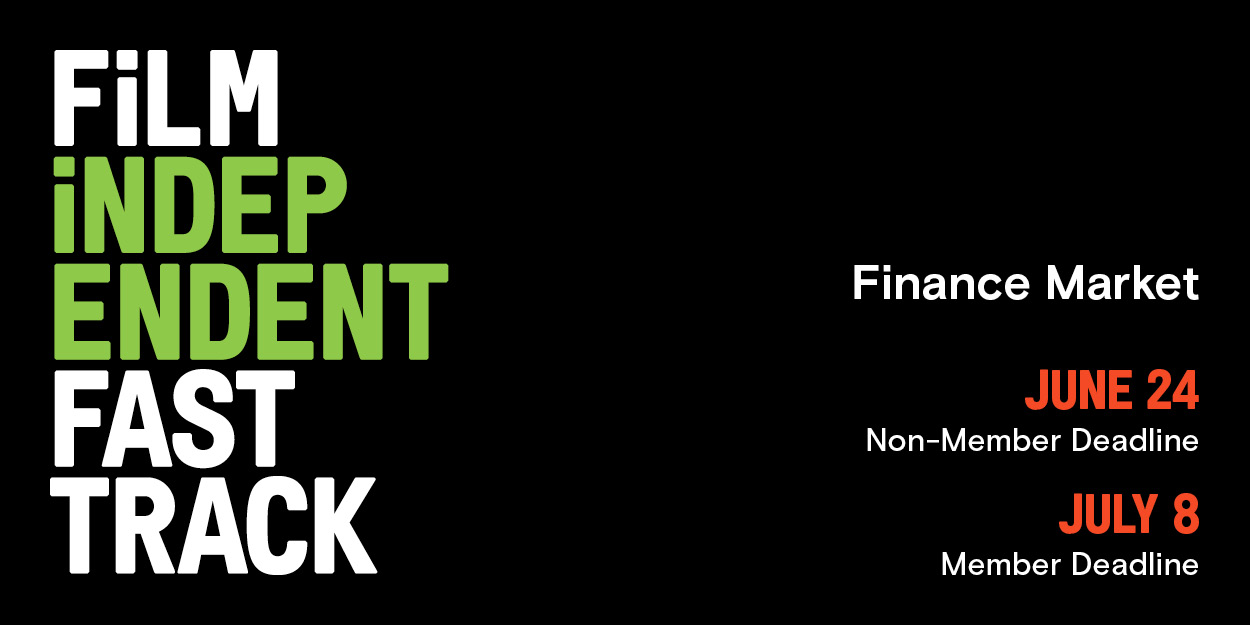 Every year Film Independent selects up to 10 fiction and five non-fiction feature projects to participate in an intensive film finance market that takes place over four days in November. Film Independent’s Fast Track is designed to connect producer-director teams with industry leaders and put projects on the “fast track.” Participants gain valuable exposure and build vital relationships as they propel their films toward completion.

Sony Pictures Television has begun accepting applications for its sixth annual Diverse Directors Program, which is part of SPT’s overall strategy to identify and engage emerging talent from a wide range of backgrounds.

Up to 15 semi-finalists will be selected from as many as 300 participants in the Diverse Directors Program’s episodic directing workshop consisting of evenings of discussion and instruction from working directors, production personnel and entertainment professionals. Finalists then will be to shadow television directors on various SPT series.

Last year’s finalists worked on SPT series including Schooled, The Goldbergs and S.W.A.T. After shadowing on The Goldbergs, Nora Kirkpatrick is now booked to direct an episode for the upcoming season.

The Diverse Directors Program begins in October and runs through the following spring. A maximum of 300 online applications will be accepted beginning today through July 21 at http://www.sptdiversedirectors.com.