Calling All Screenwriters for the Universal Writers Program 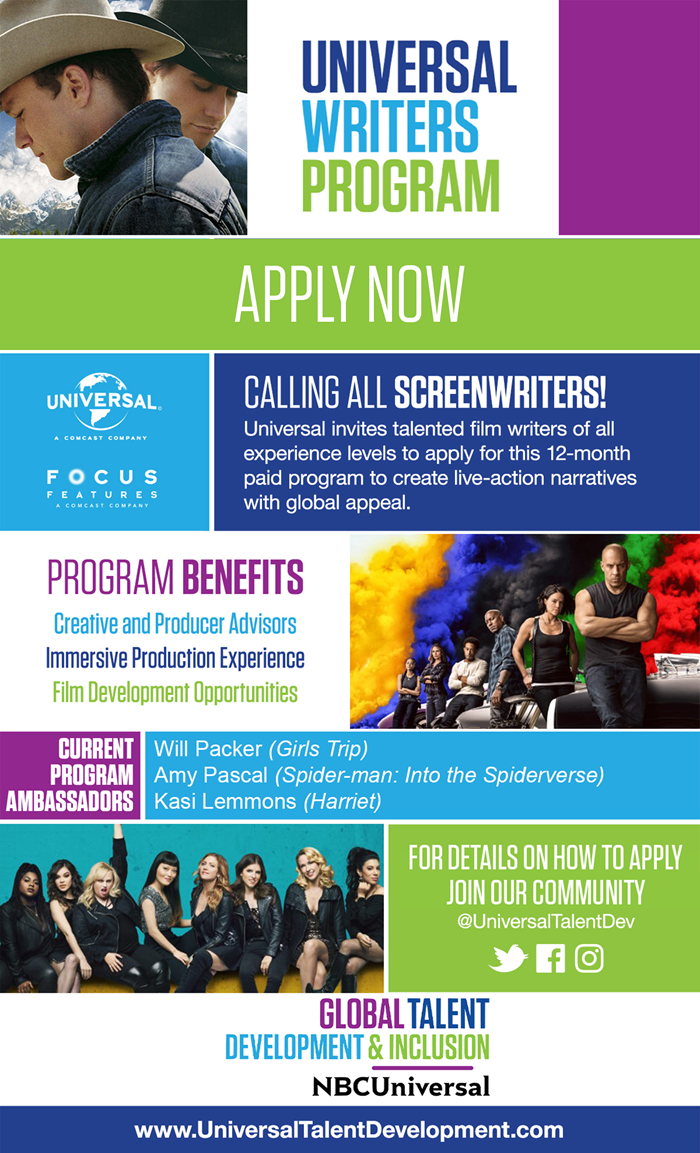 The Universal Writers Program is a one-year paid program that identifies up-and-coming and experienced screenwriters with unique points of view that build upon the Studio’s commitment to telling stories and creating films that reflect the vast diversity of their audiences. From pitch to final draft, writers are afforded creative guidance from executives, producers and designated creative consultants. Check out the requirements to apply and more information here. 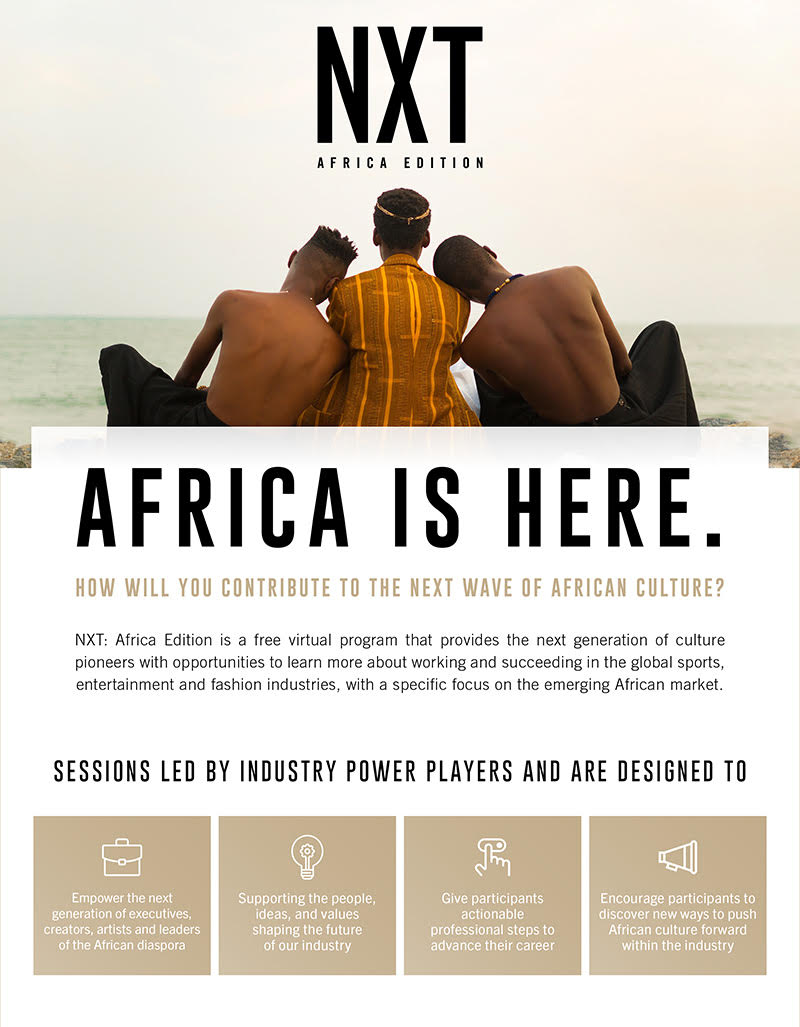 NXT: Africa Edition is a free virtual training program designed to provide impact-minded individuals, from across the world, the opportunity to learn more about working and succeeding in the global sports, entertainment including fashion industries - with a specific focus on the emerging African market. The live sessions from January 26th-February 4th are meant to provide actionable steps to advance your career, empower the next generation of executives, creators, artists, and leaders of the African diaspora.

Learn more about the program and how to register here. 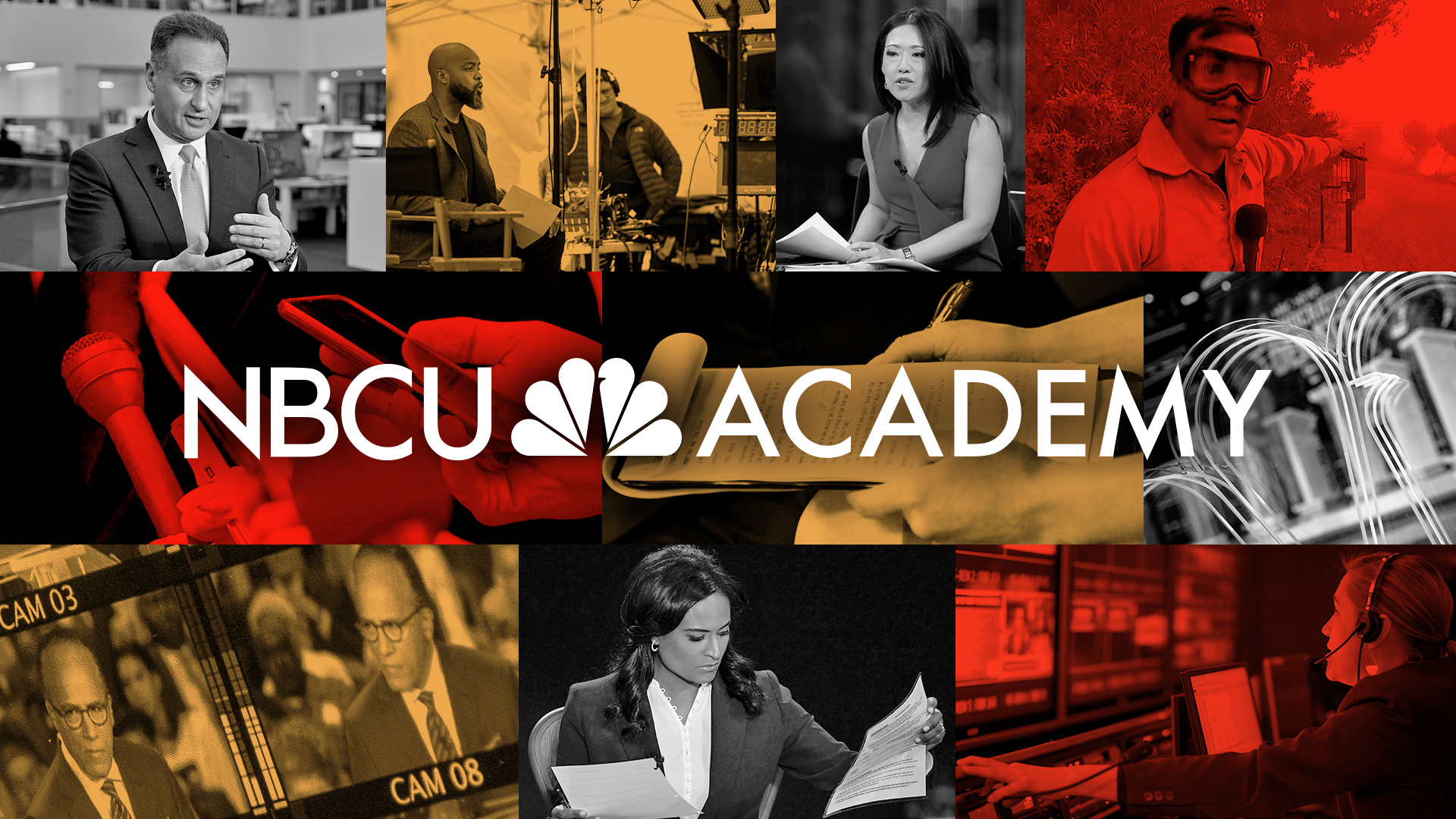 Comcast and NBCU News Group’s commitment to diversity and inclusion involves a multi-year partnership with Historically Black Colleges and Universities, Hispanic-Serving Institutions and colleges with significant Latino, Asian American and Pacific Islander, Black, Indigenous and tribal populations, impacting students from underrepresented groups. NBCU Academy will be investing $6.5 million to the initiative, including $3.5 million worth of scholarships. To learn more about these initiatives read https://www.nbcuacademy.com/press-page 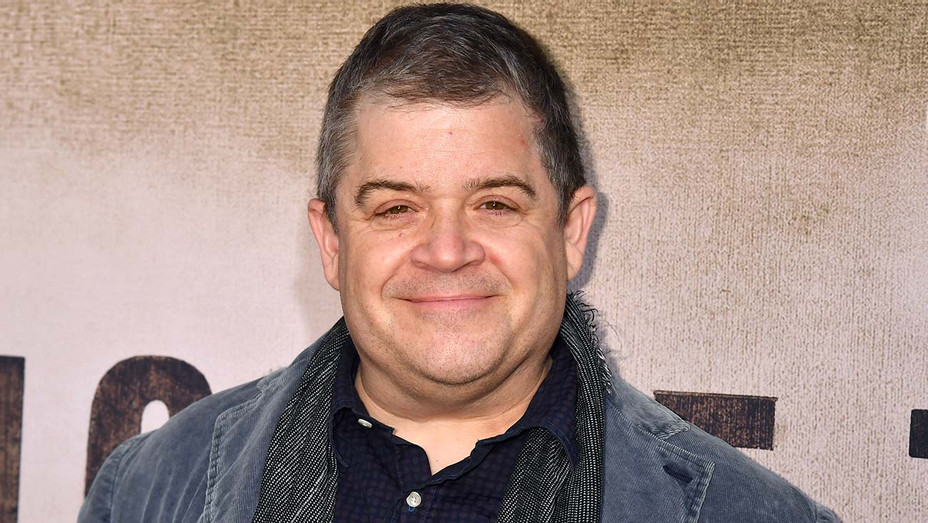 Patton Oswalt is set to host the Sundance Film Festival’s Awards Ceremony set to be live-streamed on February 2nd and will feature Alison Brie, Diego Luna, and Shira Haas alongside the jurors. The Sundance Institute announced several conversations that will take place including “Conjuring the Collective, the Womxn at Sundance Speakeasy” which will include Puerto Rican actor Rita Moreno. Read more by clicking here. 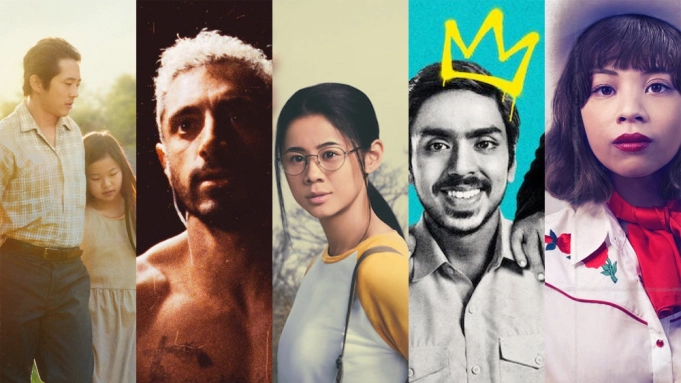 Gold Open is partnering with the Coalition of Asian Pacifics in Entertainment CAPE to launch the inaugural Gold List which honors outstanding Asian and Pacific Islander achievements in film every year. Gold Open is part of Gold House which bolsters multicultural movies to box office success. The movement brought shine to “Parasite” and “Crazy Rich Asians”. With anti-Asian racism surging during the pandemic, this celebration of talent is more than welcomed to eclipse the toxicity faced by Asians, as well as other underrepresented communities. Read more here. 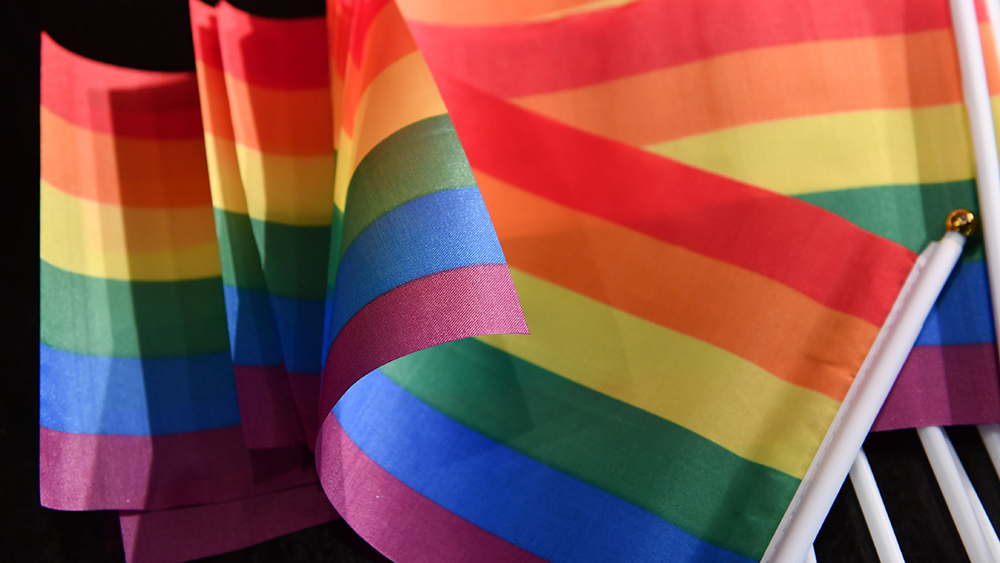 Glaad is teaming up with Outfest to host the first virtual Queer House during the 2021 Sundance Film Festival! Queer House will offer panels, discussions, and performances that celebrate LGBTQ films and filmmakers. Their programming will kick off Friday morning with Queer and Latinx Representation in Film & Television, a panel moderated by GLAAD’s director of Spanish-language and Latinx media, Monica Trasandes. 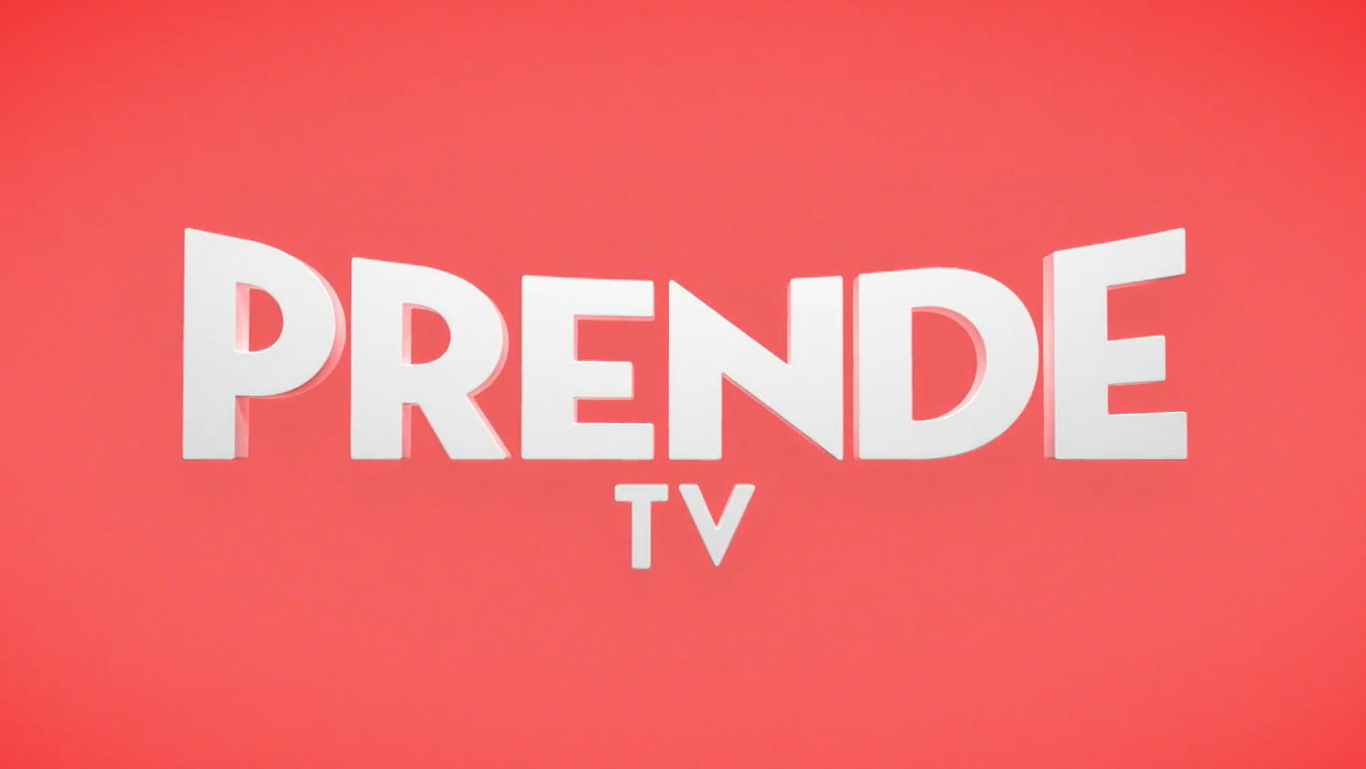 Six of the nation’s most prominent advertisers have signed on as early supporters of Univision’s PrendeTV. Clorox, Coca-Cola, Dunkin, Johnson & Johnson, Toyota, and Walmart will become part of PrendeTV Premier Club, where they will get a first look at new advertising innovations and formats as well as insights and research. The streaming service is expected to have over 10,000 hours of on-demand video programming in Spanish. Click here to learn more. 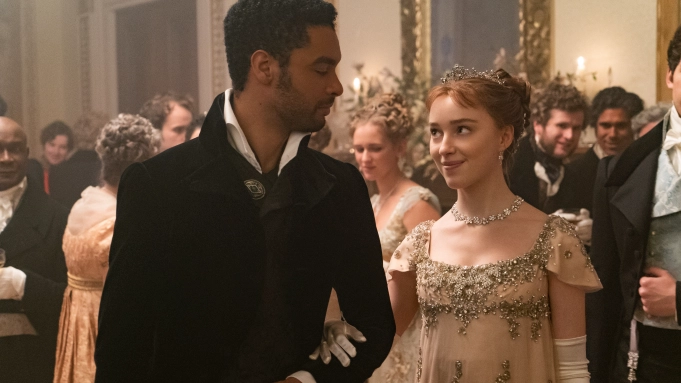 Shonda Rhymes hits out of the ballpark again with her smashing hit Bridgerton! The new Netflix show was watched by a record 82 million households around the world. This new series viewership  surpassed Netflix’s expectations, which was 63 million views. The show premiered at the right time as millions of families were told to stay as the COVID cases surged. Netflix renewed the show for the second season.