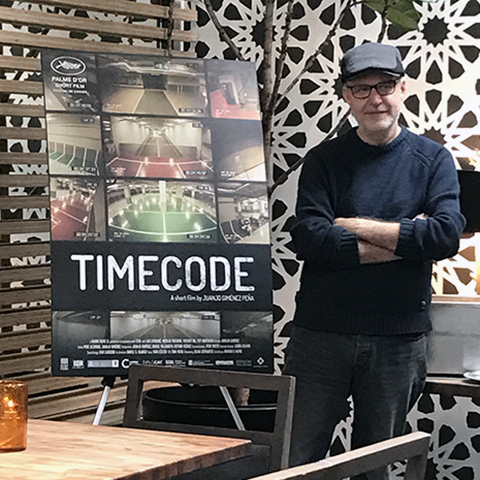 This week NALIP had the opportunity to interview NALIP supporter, Juanjo Gimenez, director of the Oscar-nominated short ‘Timecode’. The Spanish director had a lot to say about his inspiration for the short, the challenge of breaking into the U.S. market and the importance of diverse stories.

Regarding his inspiration for the short, Gimenez said his film is a convergence of ideas he had in mind. One of those ideas involved linking the short to a personal story which occurred various years ago. “I worked at a large company and had some free time,” Gimenez recalled. “I would use the computer at work to write some personal stories and ideas. A colleague of mine found my work, and without telling me anything she began to share them with others. She discovered my secret in a way.”

Gimenez decided to make the short a dance film because he had been wanting to do something dance-related for a while. He wanted to integrate dancing with the narration. Additionally, he wanted to do something which involved security cameras. That is how 'Timecode' came to be.

In reference to breaking into the U.S. market, Gimenez said it was very difficult. Being nominated for an Oscar with a short is something very complicated. “You start off with millions of shorts throughout the year, and throughout the phases those millions turn into hundreds,” he said. “In the final showcase there are 10, and from those five make the cut. It’s complicated. The fact that we got there, I consider it something totally exceptional.”

Gimenez weighed in on the importance of having organizations like NALIP to promote diverse stories and how showcasing diverse voices at the Oscars is critical. He mentioned he doesn’t believe there is a lack of diversity in his nomination category, in fact, there is not a single short from America or Canada that is nominated at this year’s awards. “From what I’m told, the Academy is very proud of this, because they often don’t have it, and are aware that it lacks diversity in other areas,” said Gimenez.

“I think the Oscars are awards from Hollywood, first and foremost for the main industry. However, they often leave the door open for film from around the world so that diverse stories can make it through. It’s important because the Oscars have a large attraction- the whole world is waiting for this week. The Oscars trespass the film sector- they reach the general world, and the world is really diverse. So for them to be a reflection of that diversity, more than important, I think it’s essential.”

Good luck to Juanjo Gimenez and all of the rest of the nominees.