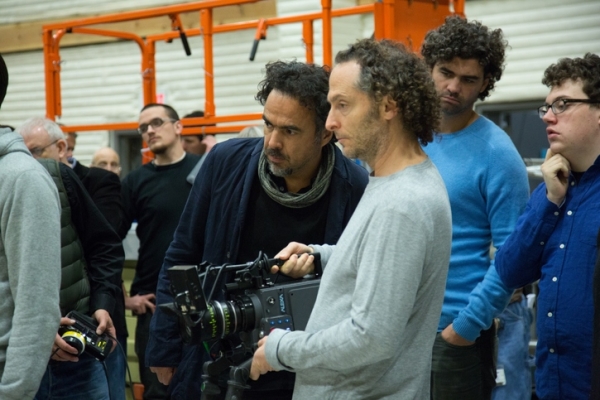 Alejandro Gonzalez Inarritu and Emanuel Lubezki are slated to be nominated for their work in 'Birdman'. Awards season has begun and Latino filmmakers are thriving after three major awards were handed out. How will this impact their chances at winning at the 2015 Oscars? (Photo : Fox Searchlight )

Awards season has begun and Latino filmmakers are thriving after three major awards were handed out.

Latin Americans represent a minority in the Hollywood industry and have always been misrepresented. However, last year, Alfonso Cuaron made history, winning the Oscar for Best Director as he became the first Latin American director to obtain the award. Meanwhile, Emmanuel Lubezki, the Mexican cinematographer won the Best Cinematography award, while Mexican-born Lupita Nyong'o won the Best Supporting Actress award.

The year is looking positive for Latin Americans once again as Alejandro Gonzalez Inarritu's "Birdman" is looking like the front-runner to win the Academy Award. The film has already won the Gotham Award and it is the top nominated film at the Indie Spirit Awards awards. Additionally, Inarritu is likely to be nominated for Best Director, as well as Best Original Screenplay.

The film will also likely to get a nomination for Best Cinematography for Lubezki. If he receives a nomination, it would mark his seventh.

While "Birdman" is climbing up the Best Picture ladder, Oscar Isaac's performance in "A Most Violent Year" is generating positive buzz and awards traction. The Guatemalan recently won the Best Actor award at the National Board of Review and was nominated for the Gothams. Isaac is quickly becoming one of the most sought-after actors and he was already snubbed last year for his work in his breakout turn in "Inside Llewyn Davis." This year, he was cast in "X-Men: Apocalypse," "Star Wars: The Force Awakens" and starred in the acclaimed "The Two Faces of January." "A Most Violent Year" has not been generating a lot of buzz due to late release date, but perhaps after the NBR win, he will obtain his first nomination.

Rodrigo Prieto is also generating a lot of buzz for his work in "The Homesman." The Mexican cinematographer has been nominated once for his work on "Brokeback Mountain" but has been ignored for his most recent work. In particular, he failed to regenerate buzz for his beautiful photography in "Babel" and "Biutiful." He also failed to get a nomination for "Lust, Caution." "The Homesman" showcases his expertise with a Western film and photographing landscapes. Prieto is likely to get nominated, especially since the Academy has shown time and again that it relishes westerns. In the past few years, "Django Unchained" and "True Grit" were both nominations for cinematography and both almost won.

Latin Americans may also have some luck in the foreign film category. "Wild Tales" recently surprised and won the National Board of Review. The Argentine feature was submitted by the country to represent the nation at the Academy Awards after it was a huge hit at the festival circuit. The feature played at Cannes, Telluride and Toronto and later became a sensation at the box office in Latin America. While Sony Pictures Classics will release it in February, there is a lot of buzz for the feature.

here are some longshots including Gael Garcia Bernal for his work in "Rosewater." After having flopped at the box office, the movie quickly faded from contention. "Chef," which features multiple Latinos, is also fading from the awards circuit but perhaps a Golden Globe nomination is more likely.

There are other foreign film contenders in particular Brazil's "The Way He Looks" which is an uplifting feature that played at Berlin and was released in theaters this year. Chile's "To Kill a Man" also received praise and won at Sundance.

The more lavish "Cantinflas" and "The Liberator" are unlikely to contend for foreign films due to their reviews, but they could receive nominations in the technical awards.

Not all is certain but it is likely that Latin Americans will once again thrive at this year's Academy Awards.