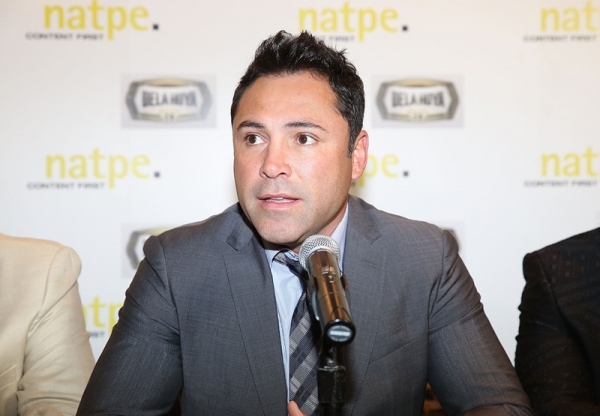 According to De La Hoya, the network will feature Spanish-language contents as it will target Latino audiences, particularly the more than 50 million Latinos in the United States, Tha Boxing Voice reports.

"De La Hoya TV will be the premiere authority on boxing and other combat sports, providing fans with a behind-the-scenes look into the world and lifestyles of their favorite athletes," De La Hoya said. "The network aims to inspire all to live the life of a champion, delivering exceptional insight into the athletes and featuring entertainment, global destinations, news and more."

De La Hoya said his network will provide an in-depth look on different combat sports, hoping to inspire the audience by informing them about the lifestyle and usual routine of their favorite athletes.

The network, which will also provide English contents in the future, will initially be offered as a free video-on-demand service and will turn into a traditional cable network that offers content for a certain subscription fee.

The boxing legend will launch his cable in channel in partnership with well-known television and cable executive Victor Hugo Montero, who expressed confidence that the network will enjoy success in the future. Montero was responsible for launching Sun Channel Tourism TV, which is Venezuela's first cable channel, and also helped revive Fashion TV Latina America.

"In my decades of working in television, I've seen few opportunities to connect with an untapped market with such an exponential opportunity for growth," Montero said. "For over a year we have worked on this project and are focused on expanding content from Spanish to include English and make it available to a larger audience."

Hispanic audiences have reportedly been looking for a cable channel that focuses on combat sports like boxing and mixed martial arts. A recent survey revealed that boxing is now the second most popular sport among Latinos -- next to soccer -- and Latino audiences comprise more than 50 percent of the total MMA fan base.