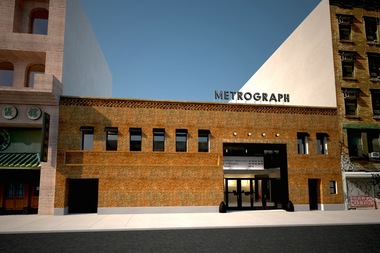 LOWER EAST SIDE — A mix of cult classics, independent films and new documentaries are coming to the Metrograph, a movie theater opening next month.

The inaugural schedule includes international releases like “The Measure of a Man," a French drama that was nominated for the Palme d’Or at last year’s Cannes Film Festival, as well as works by directors like Andy Warhol, Martin Scorsese and French filmmaker Jean Eustache.

The theater plans to show its films in both 35mm film and digital projection, its founders said. Metrograph will open on Feb. 19 for private events and begin its public programming in March.

“We want to revive the joy of going to the movies in a newly designed venue that will be welcoming to all filmgoers for a breezy afternoon matinee, a Saturday night out at the movies, a day-long epic binge or a late-night marathon — all are waiting for you through the doors of Metrograph,” said the theater’s artistic and programming director Jacob Perlin in a statement.

In addition to the two movie theaters, Metrograph will include a restaurant inspired by the dining areas of old film studios from the 1920s, 30s and 40s, as well as a bookstore, lounge and café.

Further details about its first-year programming, as well as ticket information, will be announced in the upcoming weeks, according to the theater.

Metrograph's inaugural schedule is as follows:

► March 4-10: “Surrender to the Screen,” a collection of movies that “kidnap us into the theater and transport us to the world of filmgoing.” Titles include “Taxi Driver,” “Desperately Seeking Susan,” Jean-Luc Godard’s “Vivre sa Vie” and “Goodbye, Dragon Inn,” directed by Tsai Ming-liang.

► March 9-17: Jean Eustache retrospective, which includes his two feature films “The Mother and the Whore” and “Mes Petites Amoureuses” as well as “rare imported prints.”

► March 18-24: “A Space Program,” a behind-the-scenes look into the making of the art installation "Space Program 2.0. Mars” at the Park Avenue Armory.

► Sundays beginning March 20: “Old and Improved,” a presentation of a newly preserved or restored 35mm or 16mm film.

► April 1-7: “Afternoon” by Tsai Ming-liang, which showed at the Venice Film Festival and the Toronto International Film Festival last year.

► April 15-21: “The Measure of a Man,” which will be part of a retrospective of French actor Vincent Linon’s work that includes four other films like “Seventh Heaven” and “Friday Night.”

► April 15-21: “Los Sures,” a documentary of the Puerto Rican and Dominican community in 1980s Williamsburg.

► April 22-28: “Rainer Werner Fassbinder’s Top Ten Films on 35 mm.” Metrograph will show a list of the filmmaker’s 10 favorite movies, according to a list published in 1982 ahead of a new documentary about the German filmmaker.

► April 29-May 5: “Fassbinder: To Love Without Demands,” a documentary about Rainer Werner Fassbinder, who was a major figure of the New German Cinema movement during the 1960s to 1980s.

Check this out on dnainfo.com